Incident at the Archives 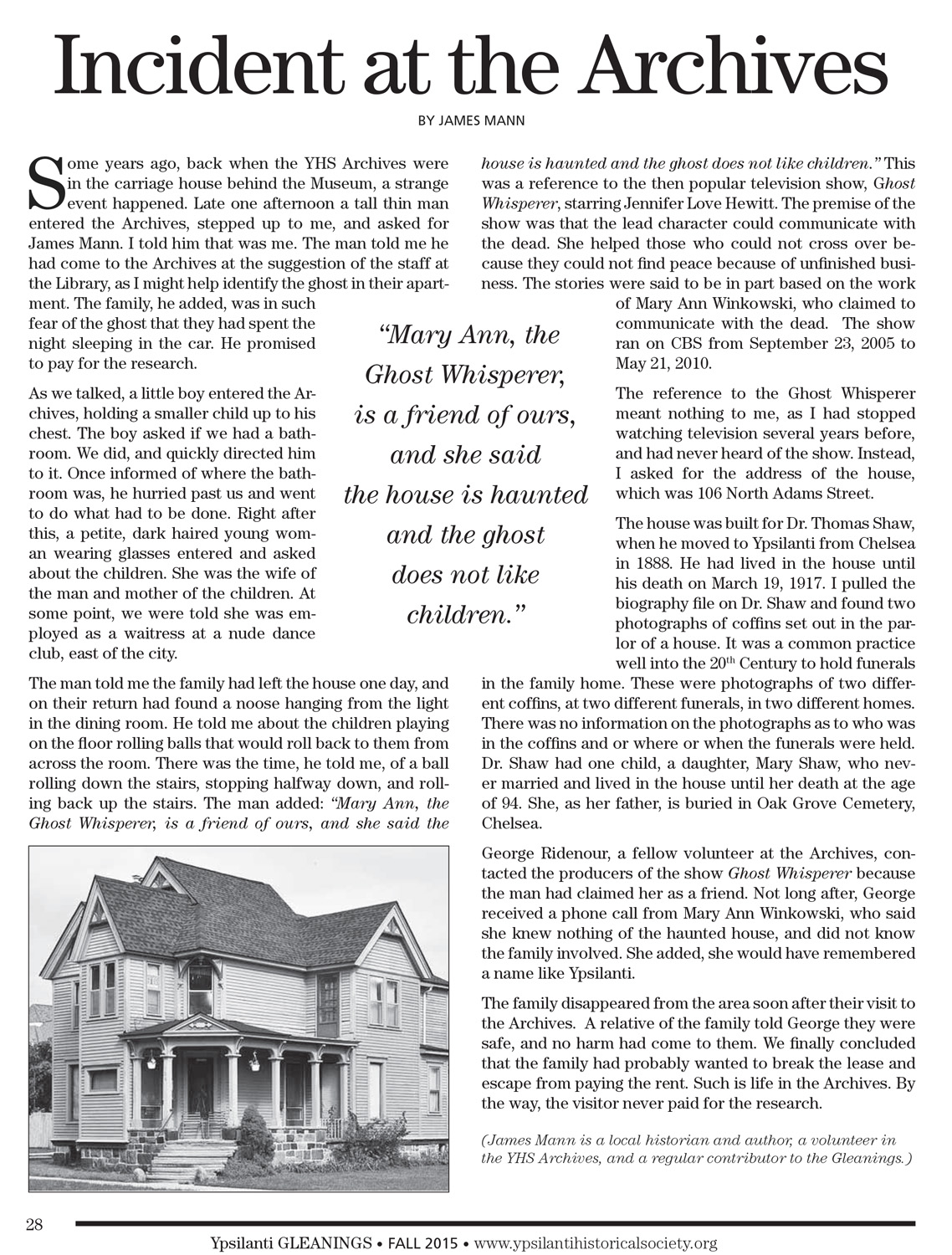 Some years ago, back when the YHS Archives were in the carriage house behind the Museum, a strange event happened. Late one afternoon a tall thin man entered the Archives, stepped up to me, and asked for James Mann. I told him that was me. The man told me he had come to the Archives at the suggestion of the staff at the Library, as I might help identify the ghost in their apartment. The family, he added, was in such fear of the ghost that they had spent the night sleeping in the car. He promised to pay for the research.

As we talked, a little boy entered the Archives, holding a smaller child up to his chest. The boy asked if we had a bathroom. We did, and quickly directed him to it. Once informed of where the bathroom was, he hurried past us and went to do what had to be done. Right after this, a petite, dark haired young woman wearing glasses entered and asked about the children. She was the wife of the man and mother of the children. At some point, we were told she was employed as a waitress at a nude dance club, east of the city.

The man told me the family had left the house one day, and on their return had found a noose hanging from the light in the dining room. He told me about the children playing on the floor rolling balls that would roll back to them from across the room. There was the time, he told me, of a ball rolling down the stairs, stopping halfway down, and rolling back up the stairs. The man added: “Mary Ann, the Ghost Whisperer, is a friend of ours, and she said the house is haunted and the ghost does not like children.” This was a reference to the then popular television show, Ghost Whisperer, starring Jennifer Love Hewitt. The premise of the show was that the lead character could communicate with the dead. She helped those who could not cross over because they could not find peace because of unfinished business. The stories were said to be in part based on the work of Mary Ann Winkowski, who claimed to communicate with the dead. The show ran on CBS from September 23, 2005 to May 21, 2010.

The reference to the Ghost Whisperer meant nothing to me, as I had stopped watching television several years before, and had never heard of the show. Instead, I asked for the address of the house, which was 106 North Adams Street.

The house was built for Dr. Thomas Shaw, when he moved to Ypsilanti from Chelsea in 1888. He had lived in the house until his death on March 19, 1917. I pulled the biography file on Dr. Shaw and found two photographs of coffins set out in the parlor of a house. It was a common practice well into the 20th Century to hold funerals in the family home. These were photographs of two different coffins, at two different funerals, in two different homes. There was no information on the photographs as to who was in the coffins and or where or when the funerals were held. Dr. Shaw had one child, a daughter, Mary Shaw, who never married and lived in the house until her death at the age of 94. She, as her father, is buried in Oak Grove Cemetery, Chelsea.

George Ridenour, a fellow volunteer at the Archives, contacted the producers of the show Ghost Whisperer because the man had claimed her as a friend. Not long after, George received a phone call from Mary Ann Winkowski, who said she knew nothing of the haunted house, and did not know the family involved. She added, she would have remembered a name like Ypsilanti.

The family disappeared from the area soon after their visit to the Archives. A relative of the family told George they were safe, and no harm had come to them. We finally concluded that the family had probably wanted to break the lease and escape from paying the rent. Such is life in the Archives. By the way, the visitor never paid for the research.