Among the Rocky Mountains in Colorado 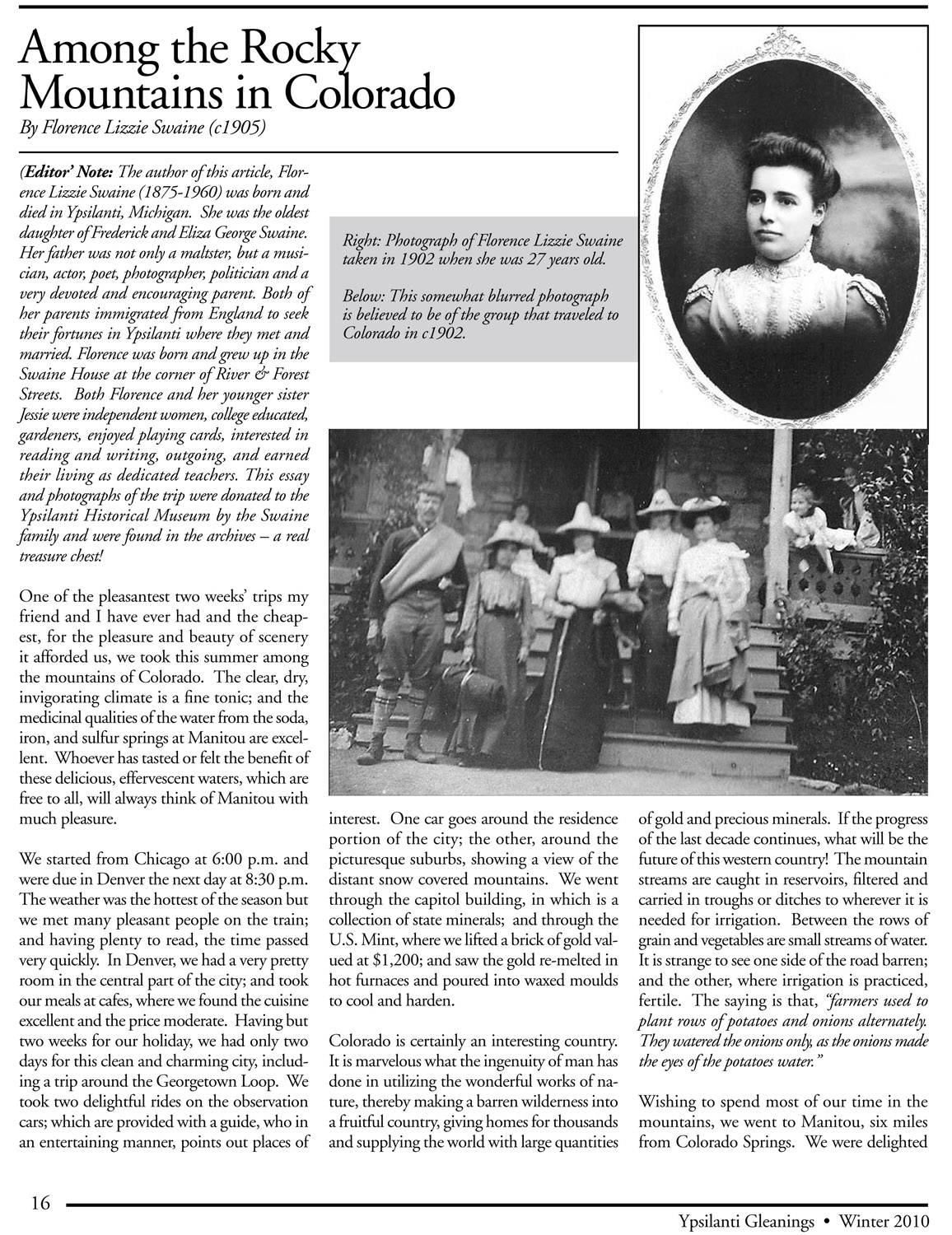 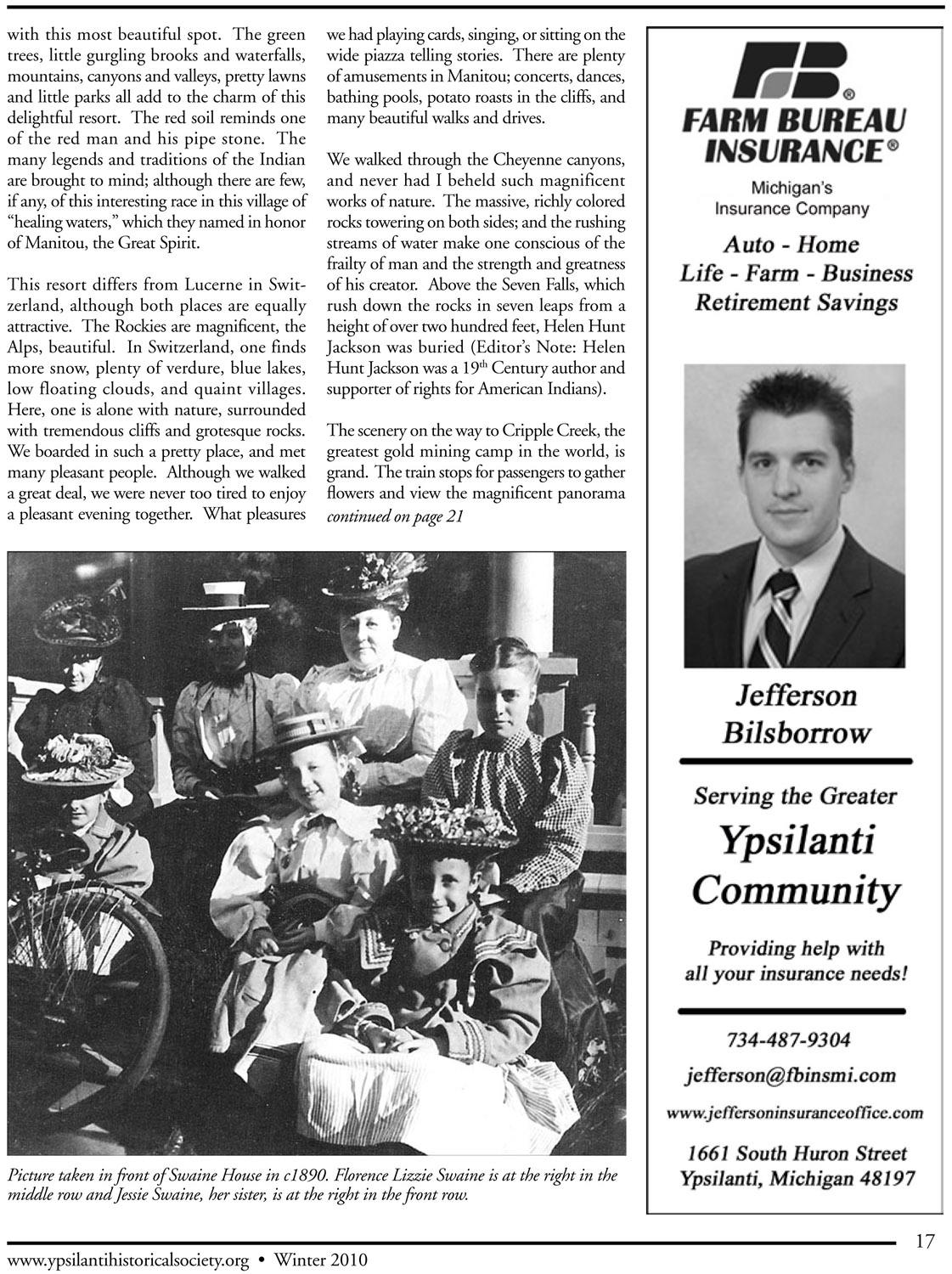 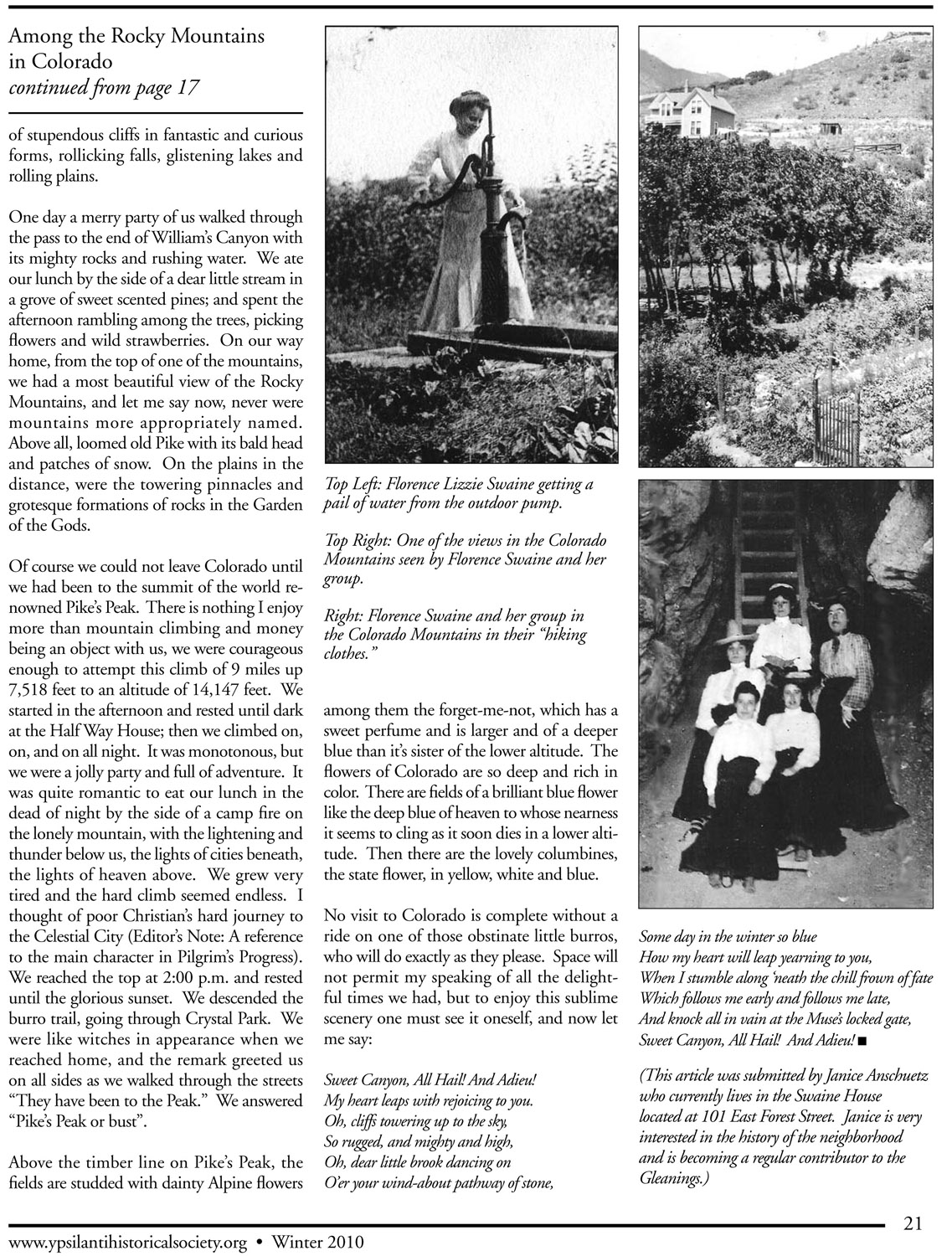 (Editor’ Note: The author of this article, Florence Lizzie Swaine (1875-1960) was born and died in Ypsilanti, Michigan.  She was the oldest daughter of Frederick and Eliza George Swaine.  Her father was not only a maltster, but a musician, actor, poet, photographer, politician and a very devoted and encouraging parent. Both of her parents immigrated from England to seek their fortunes in Ypsilanti where they met and married. Florence was born and grew up in the Swaine House at the corner of River & Forest Streets.  Both Florence and her younger sister Jessie were independent women, college educated, gardeners, enjoyed playing cards, interested in reading and writing, outgoing, and earned their living as dedicated teachers. This essay and photographs of the trip were donated to the Ypsilanti Historical Museum by the Swaine family and were found in the archives – a real treasure chest!

One of the pleasantest two weeks’ trips my friend and I have ever had and the cheapest, for the pleasure and beauty of scenery it afforded us, we took this summer among the mountains of Colorado.  The clear, dry, invigorating climate is a fine tonic; and the medicinal qualities of the water from the soda, iron, and sulfur springs at Manitou are excellent.  Whoever has tasted or felt the benefit of these delicious, effervescent waters, which are free to all, will always think of Manitou with much pleasure.

We started from Chicago at 6:00 p.m. and were due in Denver the next day at 8:30 p.m.  The weather was the hottest of the season but we met many pleasant people on the train; and having plenty to read, the time passed very quickly.  In Denver, we had a very pretty room in the central part of the city; and took our meals at cafes, where we found the cuisine excellent and the price moderate.  Having but two weeks for our holiday, we had only two days for this clean and charming city, including a trip around the Georgetown Loop.  We took two delightful rides on the observation cars; which are provided with a guide, who in an entertaining manner, points out places of interest.  One car goes around the residence portion of the city; the other, around the picturesque suburbs, showing a view of the distant snow covered mountains.  We went through the capitol building, in which is a collection of state minerals;  and through the U.S. Mint, where we lifted a brick of gold valued at $1,200; and saw the gold re-melted in hot furnaces and poured into waxed moulds to cool and harden.

Colorado is certainly an interesting country.  It is marvelous what the ingenuity of man has done in utilizing the wonderful works of nature, thereby making a barren wilderness into a fruitful country, giving homes for thousands and supplying the world with large quantities of gold and precious minerals.  If the progress of the last decade continues, what will be the future of this western country!  The mountain streams are caught in reservoirs, filtered and carried in troughs or ditches to wherever it is needed for irrigation.  Between the rows of grain and vegetables are small streams of water.  It is strange to see one side of the road barren; and the other, where irrigation is practiced, fertile.  The saying is that, “farmers used to plant rows of potatoes and onions alternately.  They watered the onions only, as the onions made the eyes of the potatoes water.”

Wishing to spend most of our time in the mountains, we went to Manitou, six miles from Colorado Springs.  We were delighted with this most beautiful spot.  The green trees, little gurgling brooks and waterfalls, mountains, canyons and valleys, pretty lawns and little parks all add to the charm of this delightful resort.  The red soil reminds one of the red man and his pipe stone.  The many legends and traditions of the Indian are brought to mind; although there are few, if any, of this interesting race in this village of “healing waters,” which they named in honor of Manitou, the Great Spirit.

This resort differs from Lucerne in Switzerland, although both places are equally attractive.  The Rockies are magnificent, the Alps, beautiful.  In Switzerland, one finds more snow, plenty of verdure, blue lakes, low floating clouds, and quaint villages. Here, one is alone with nature, surrounded with tremendous cliffs and grotesque rocks.  We boarded in such a pretty place, and met many pleasant people.  Although we walked a great deal, we were never too tired to enjoy a pleasant evening together.  What pleasures we had playing cards, singing, or sitting on the wide piazza telling stories.  There are plenty of amusements in Manitou; concerts, dances, bathing pools, potato roasts in the cliffs, and many beautiful walks and drives.

We walked through the Cheyenne canyons, and never had I beheld such magnificent works of nature.  The massive, richly colored rocks towering on both sides; and the rushing streams of water make one conscious of the frailty of man and the strength and greatness of his creator.  Above the Seven Falls, which rush down the rocks in seven leaps from a height of over two hundred feet, Helen Hunt Jackson was buried (Editor’s Note: Helen Hunt Jackson was a 19th Century author and supporter of rights for American Indians).

The scenery on the way to Cripple Creek, the greatest gold mining camp in the world, is grand.  The train stops for passengers to gather flowers and view the magnificent panorama of stupendous cliffs in fantastic and curious forms, rollicking falls, glistening lakes and rolling plains.

One day a merry party of us walked through the pass to the end of William’s Canyon with its mighty rocks and rushing water.  We ate our lunch by the side of a dear little stream in a grove of sweet scented pines; and spent the afternoon rambling among the trees, picking flowers and wild strawberries.  On our way home, from the top of one of the mountains, we had a most beautiful view of the Rocky Mountains, and let me say now, never were mountains more appropriately named.  Above all, loomed old Pike with its bald head and patches of snow.  On the plains in the distance, were the towering pinnacles and grotesque formations of rocks in the Garden of the Gods.

Of course we could not leave Colorado until we had been to the summit of the world renowned Pike’s Peak.  There is nothing I enjoy more than mountain climbing and money being an object with us, we were courageous enough to attempt this climb of 9 miles up 7,518 feet to an altitude of 14,147 feet.  We started in the afternoon and rested until dark at the Half Way House; then we climbed on, on, and on all night.  It was monotonous, but we were a jolly party and full of adventure.  It was quite romantic to eat our lunch in the dead of night by the side of a camp fire on the lonely mountain, with the lightening and thunder below us, the lights of cities beneath, the lights of heaven above.  We grew very tired and the hard climb seemed endless.  I thought of poor Christian’s hard journey to the Celestial City (Editor’s Note: A reference to the main character in Pilgrim’s Progress).  We reached the top at 2:00 p.m. and rested until the glorious sunset.  We descended the burro trail, going through Crystal Park.  We were like witches in appearance when we reached home, and the remark greeted us on all sides as we walked through the streets “They have been to the Peak.”  We answered “Pike’s Peak or bust”.

Above the timber line on Pike’s Peak, the fields are studded with dainty Alpine flowers among them the forget-me-not, which has a sweet perfume and is larger and of a deeper blue than it’s sister of the lower altitude.  The flowers of Colorado are so deep and rich in color.  There are fields of a brilliant blue flower like the deep blue of heaven to whose nearness it seems to cling as it soon dies in a lower altitude.  Then there are the lovely columbines, the state flower, in yellow, white and blue.

No visit to Colorado is complete without a ride on one of those obstinate little burros, who will do exactly as they please.  Space will not permit my speaking of all the delightful times we had, but to enjoy this sublime scenery one must see it oneself, and now let me say:

Sweet Canyon, All Hail! And Adieu!

My heart leaps with rejoicing to you.

Oh, cliffs towering up to the sky,

So rugged, and mighty and high,

O’er your wind-about pathway of stone,

Some day in the winter so blue

How my heart will leap yearning to you,

When I stumble along ‘neath the chill frown of fate

And knock all in vain at the Muse’s locked gate,

Sweet Canyon, All Hail!  And Adieu!

(This article was submitted by Janice Anschuetz who currently lives in the Swaine House located at 101 East Forest Street.  Janice is very interested in the history of the neighborhood and is becoming a regular contributor to the Gleanings.)

Photo 1: Photograph of Florence Lizzie Swaine taken in 1902 when she was 27 years old.

Photo 2: This somewhat blurred photograph is believed to be of the group that traveled to Colorado in c1902.

Photo 4]: Florence Lizzie Swaine getting a pail of water from the outdoor pump.

Photo 5]: One of the views in the Colorado Mountains seen by Florence Swaine and her group.

Photo 6]: Florence Swaine and her group in the Colorado Mountains in their “hiking clothes.”alf Way House; then we climbed on, -HH