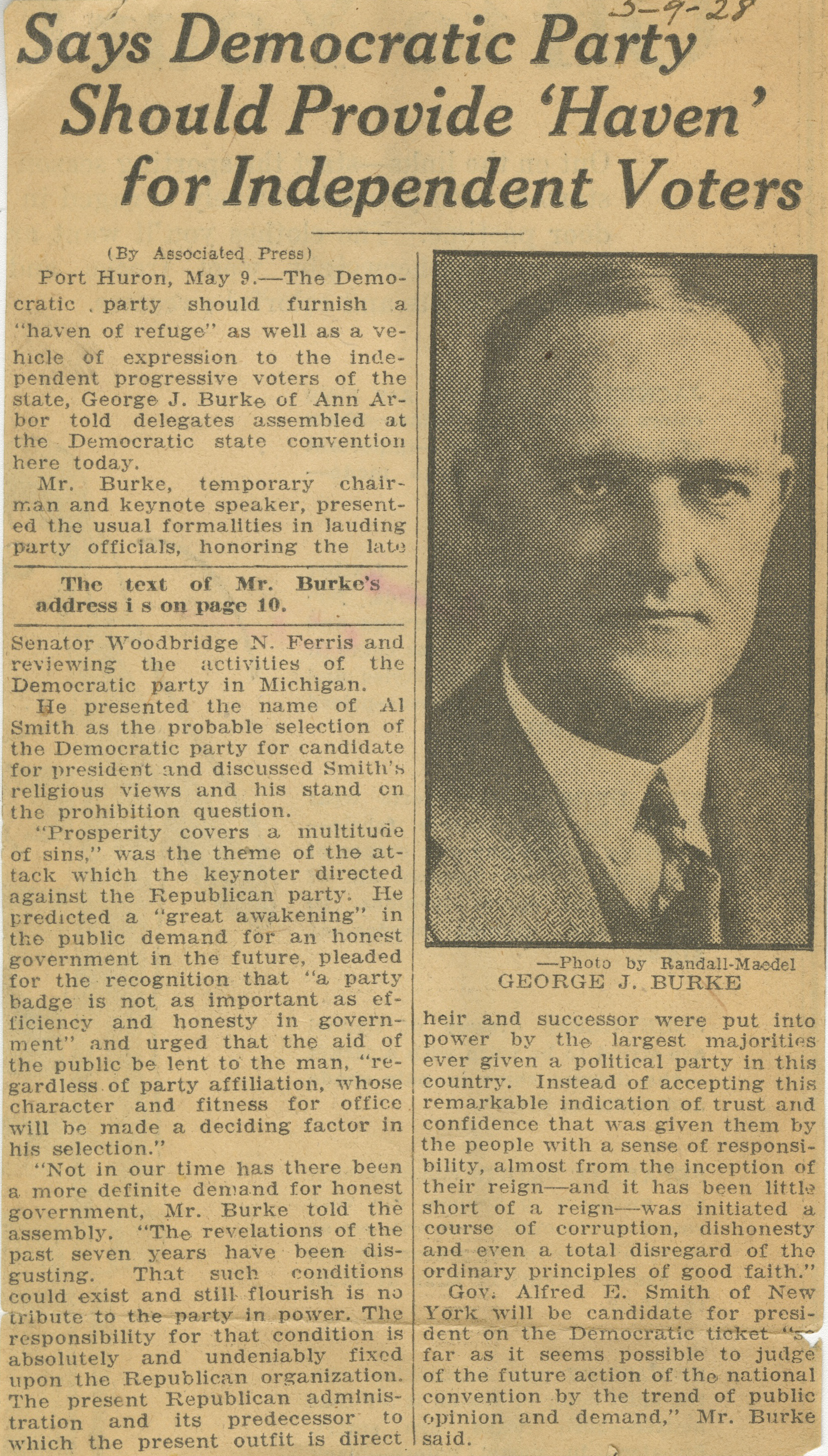 (By Associated Press) Port Huron, May 9.-The Democratic party should furnish a “haven of refuge" as well as a vehicle of expression to the independent progressive voters of the state, George J. Burke of Ann Arbor told delegates assembled at the Democratic state convention here today.
Mr. Burke, temporary chairman and keynote speaker, presented the usual formalities in lauding party officials, honoring the late
The text of Mr. Burke's address i s on page 10. Senator Woodbridge N. Ferris and reviewing the activities of the Democratic party in Michigan.
He presented the name of Al Smith as the probable selection of the Democratic party for candidate for president and discussed Smith's religious views and his stand on the prohibition question.
"Prosperity covers a multitude of sins," was the theme of the attack which the keynoter directed against the Republican party. He predicted a great awakening in the public demand for an honest government in the future, pleaded for the recognition that "a party badge is not as important as efficiency and honesty in government" and urged that the aid of the public be lent to the man, "regardless of party affiliation, whose character and fitness for office will be made a deciding factor in his selection."
"Not in our time has there been a more definite demand for honest government, Mr. Burke told the assembly. “The revelations of the past seven years have been disgusting. That such conditions could exist and still flourish is no Tribute to the party in power. The responsibility for that condition is absolutely and undeniably fixed upon the Republican organization. The present Republican administration and its predecessor to which the present outfit is direct heir and successor were put into power by the largest majorities ever given a political party in this country. Instead of accepting this remarkable indication of trust and confidence that was given them by the people with a sense of responsibility, almost from the inception of their reign-and it has been little short of a reign-was initiated a course of corruption, dishonesty and even a total disregard of the ordinary principles of good faith."
Gov. Alfred E. Smith of New York will be candidate for president on the Democratic ticket is far as it seems possible to judge of the future action of the national convention by the trend of public opinion and demand," Mr. Burke said.