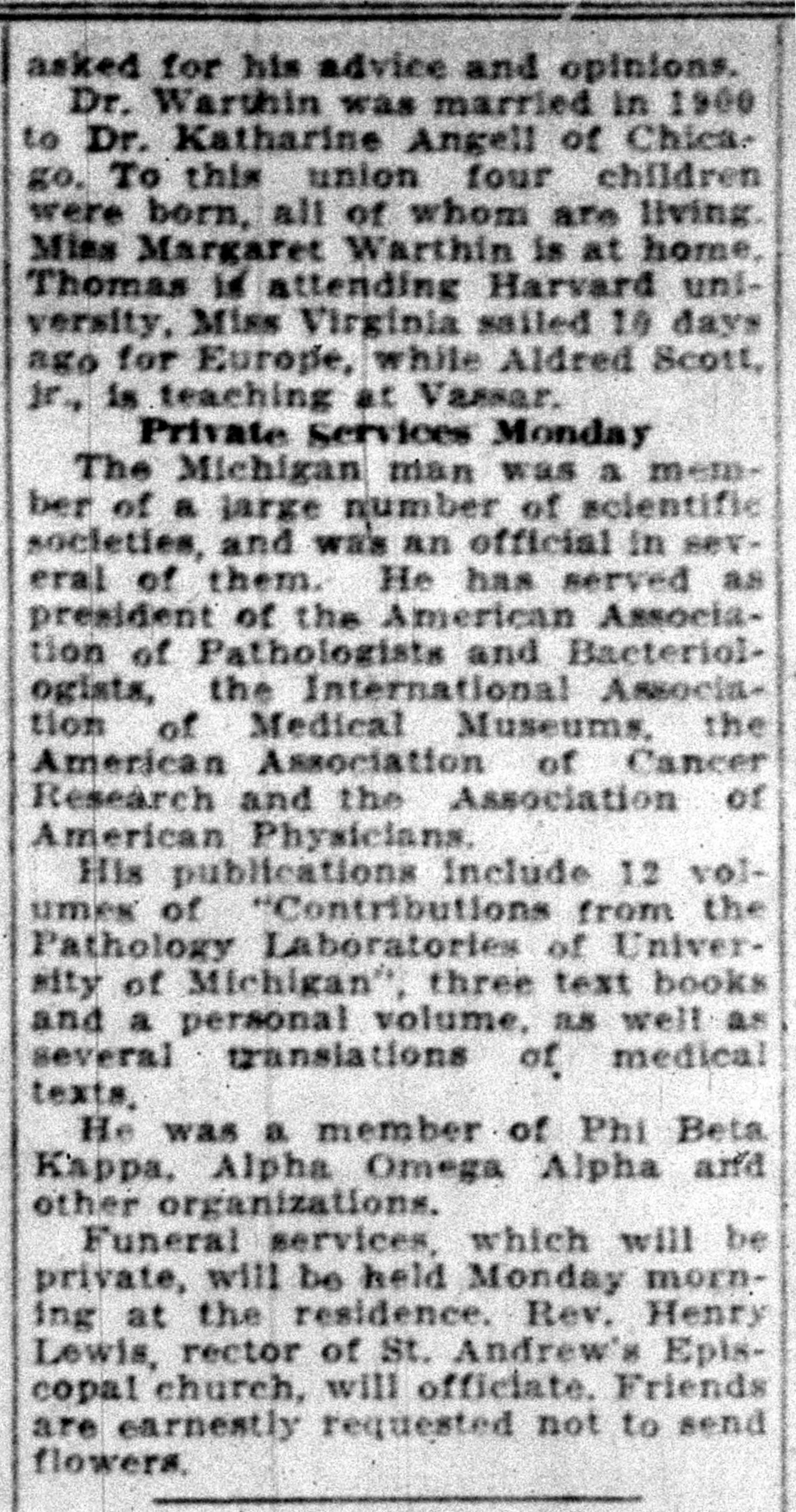 DR. A. S. WARTHIN
PASSES AWAY HERE
Death Follows Return to Home After Prolonged Illness in Baltimore Hospital; Private
Funeral Services Planned Monday
Death today dissolved that University of Michigan trinity known as "The Big Three" of the medical school. Back in Ann Arbor only a few days after a prolonged absence in the east where he had remained for treatment
of an illness which became acute during the winter, Dr. . Aldred Scott Warthin, director of the pathology laboratories of the University medical school, died at 5:30 this morning at his home on Ferdon road.
An attack of asthma was given as the immediate cause of death.
With his demise Michigan lost one of her greatest scientists, one of her greatest scholars, and one of her most loved teachers. He was known throughout the world as a pathologist and toxocologist of exceptional ability and keenness. The students who have come under his extensive lecture courses and rigorous laboratory training humber into the dozens of thousands, for Dr. Warthin had been associated on the Michigan faculty since 1891.
With his increasing international reputation Dr. Warthin became the recipient of many honors. It was while in Baltimore last Mareh to receive one of these honors that his health became seriously impaired. At that time he was made rice president of the American College of Physicians..
Returned This Week He entered Johns Hopkins hospital for treatment. An operation was performed. After a consider. able time, he rallied and came home the middle of this week.
Dr. Warthin was not alone a scientist. Perhaps btologist is a term more fitted to cover the general trope of his activities and lines of thought. He Interested himself vit. ally in the biological aspects of the social structure of religion and of philosophy. His daily lectures in the amphitheaters of the medical school and hospital were characterized with frequent penetrating observations relating to these phases of Wte. To take a course" from Dr. Warthin mennt more than listening to a recitation of facts as de- | livered from the lecture. platform. It mean a daily contact with a profound, fearless, and generous think-1 er. Hi, Iast published book. The Creed of a Biologist," sets forth his views so often stated during these lectures.
In 1928 he asserted before the Race Betterment conference at Bat. tle Creek that "man needs a new fellklon if the race is to be saved from degeneration."
From the trend of the papers helne rend here," he said, wone would take this to be a race deter. loration contarence."
The pathologist said his observations youth had led him to believe
the old religions are not a simple, logical rule of life, and panning away. Youth is looking for a aimple logical rule of life, and the elemental facts of biology will sut. flee.
"Born of religion," he said, "ls the doctrine of forgiveness of sin. This has done more harm blolorst cally than any other single think.
"Man's old religions, although they are passing. are reacting upon his environment, dangerously and Inevitably."
Born in Indian Ho was born Oct. 31. 1866. Greensburg. Ind.
He came to Michigan as a sty. dent in 1888, in which year he Aad been graduated from Indian (Continued from Page One! university. He received his master's degree here two years later, then entered the medical school. His medical degree was conferred a year later, and a doctor of philosophy degree in 1893. In 1887, how. ever, he obtained a diploma from the Cincinnati conservatory of munte. His medical education was continued in Vienna and Friebure.
His first association on the Mich. can faculty was as an assistant in the department of Internal medicine. In 1893 he became a demonstrator in pathology, and advanced through the ranks until 1902 when he was made director of the pathology laboratories and professor of pathology.
During his service in that divl. non, he contributed' more than 1,000 articles to medical and other scientific Journals besides writing numerous textbooks. These books . have found wide use as texts and
references in medical schools and elinies the world over. .
Important Researches THIS most important researcher concerned the anatomy and pathol. lory of small glands known as the marow-lymphs, and in the pathol. on of the blood and blood-forming organs. Or probably equal Importance was his work in cardiac and latent syphilla, tuberculosis, cancer and goiter. For his work in cardiac syphilia, ha was made winner of the Rusell award at the University in 1929. He determined the torde action of mustard cas,
Because of his wide knowledge and practice in these fields, he frequently wu called on to give expert opinions in court trala. HIS pathological findings were accepted n final evidence in dozens of such Casa, Hospitals in the middle west asked for his advice and opinions.. 1. Dr. Warthin was married in 1960 Ito Dr. Katharine Angel of Chica: 180. To the union tour children I were born, all of whom ar living | 1 Mies Markaret Warthin is at home,
Thomas Kattending Harvard uni-1 Tversity. Mies Virginia walled 10 days) | ago for Europe, while Aldred Scott,
Private Seniors Monday
societies, and we's an official in sev.
president of the American Axvoca- ! tion of Pathologists and Bacteriologia, the International Associa) tion of Medical Museum.. thel American Association of Cancer Research and the Association of American Physicians
His publications include 12 vol. 1 Times of "Contributions (rom the Pathology Laboratories of Univer.
ity of Michigan'. three text book 1 Tand a personal volume, as well as
ral translations of medical)
He was a member of Phi Beta Kappa, Alpha Omega Alpha arra | other organizations.
Funeral services which will be | private, will be held Monday morn
ing at the residence. Rev. Henry) | Lewis, rector of St. Andrew'* Episcopal church, will officiate. Friends
earnestly requested not to send flowers,