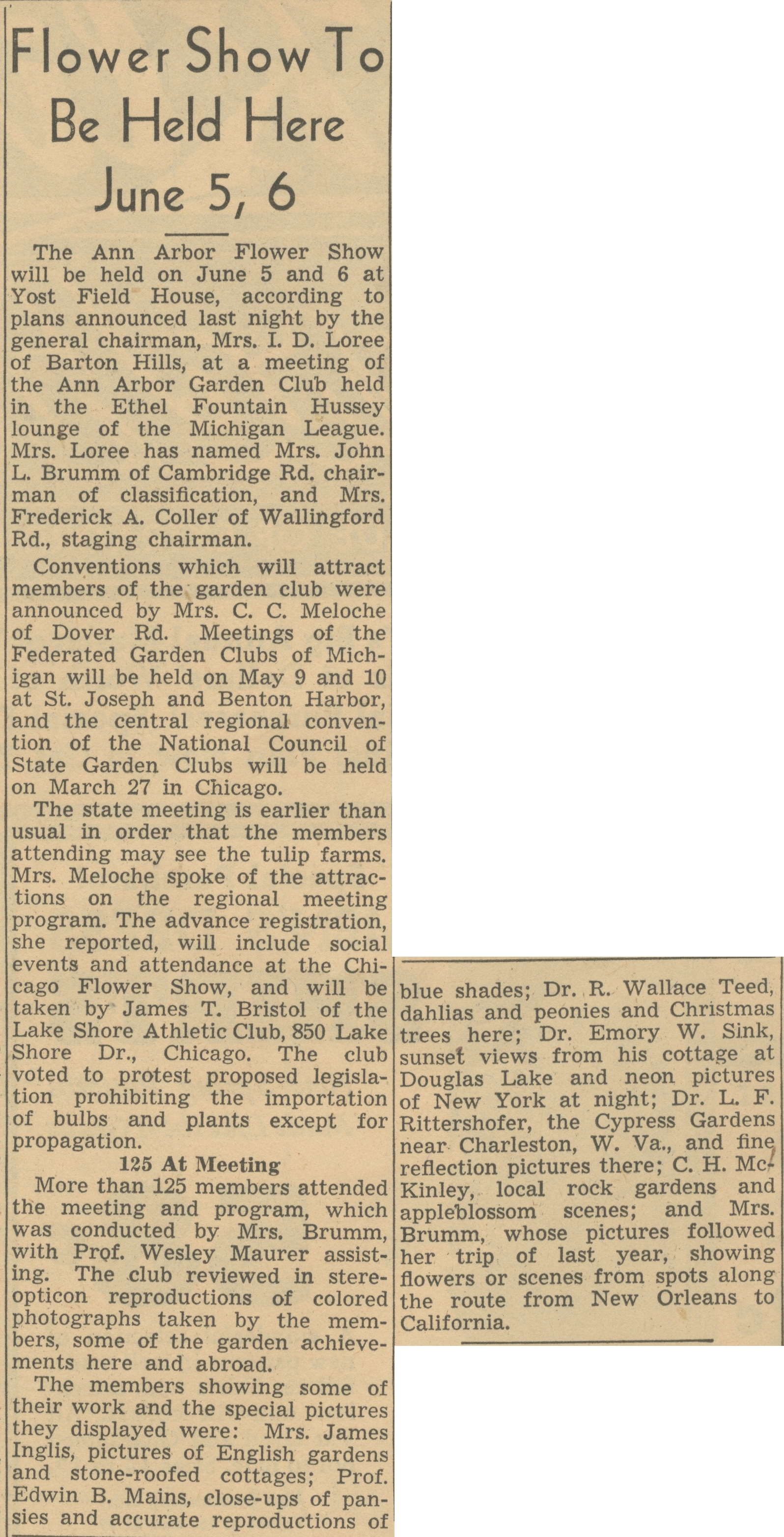 The Ann Arbor Flower Show will be held on June 5 and 6 at Yost Field House, according to plans announced last night by the general chairman, Mrs. I. D. Loree of Barton Hills, at a meeting of the Ann Arbor Garden Club held in the Ethel Fountain Hussey lounge of the Michigan League. Mrs. Loree has named Mrs. John L. Brumm of Cambridge Rd. chairman of classification, and Mrs. Frederick A. Coller of Wallingford Rd., staging chairman.

Conventions which will attract members of the garden club were announced by Mrs. C. C. Meloche of Dover Rd. Meetings of the Federated Garden Clubs of Michigan will be held on May 9 and 10 at St. Joseph and Benton Harbor, and the central regional convention of the National Council of State Garden Clubs will be held on March 27 in Chicago.

The state meeting is earlier than usual in order that the members attending may see the tulip farms. Mrs. Meloche spoke of the attractions on the regional meeting program. The advance registration, she reported, will include social events and attendance at the Chicago Flower Show, and will be taken by James T. Bristol of the Lake Shore Athletic Club, 850 Lake Shore Dr., Chicago. The club voted to protest proposed legislation prohibiting the importation of bulbs and plants except for propagation.

More than 125 members attended the meeting and program, which was conducted by Mrs. Brumm, with Prof. Wesley Maurer assisting. The club reviewed in stereopticon reproductions of colored photographs taken by the members, some of the garden achievements here and abroad.

The members showing some of their work and the special pictures they displayed were: Mrs. James Inglis, pictures of English gardens and stone-roofed cottages; Prof. Edwin B. Mains, close-ups of pansies and accurate reproductions of blue shades; Dr. R. Wallace Teed, dahlias and peonies and Christmas trees here; Dr. Emory W. Sink, sunset views from his cottage at Douglas Lake and neon pictures of New York at night; Dr. L. F. Rittershofer, the Cypress Gardens near Charleston, W. Va., and fine reflection pictures there; C. H. McKinley, local rock gardens and appleblossom scenes; and Mrs. Brumm, whose pictures followed her trip of last year, showing flowers or scenes from spots along the route from New Orleans to California.