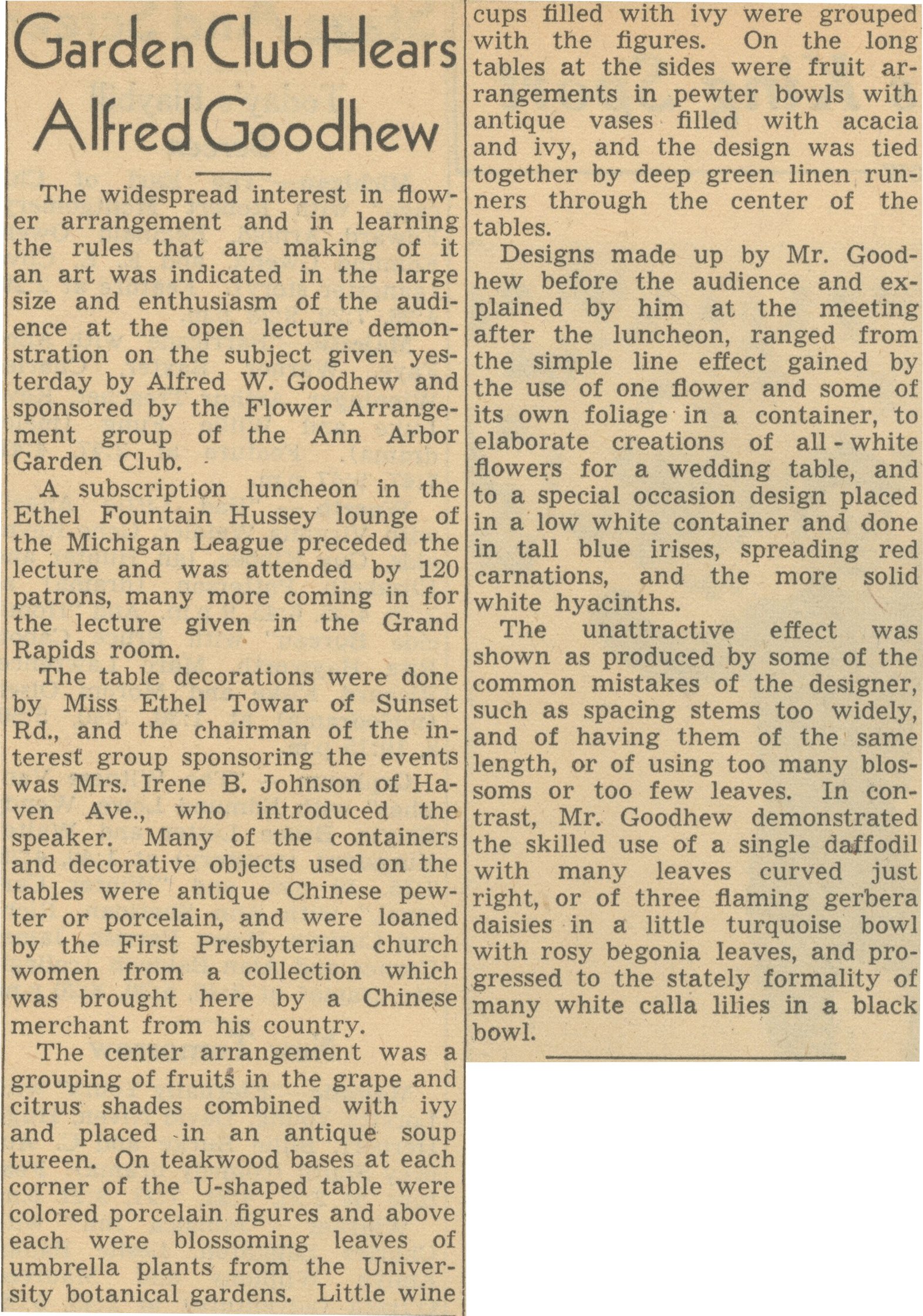 The widespread interest in flower arrangement and in learning the rules that are making of it an art was indicated in the large size and enthusiasm of the audience at the open lecture demonstration on the subject given yesterday by Alfred W. Goodhew and sponsored by the Flower Arrangement group of the Ann Arbor Garden Club.

A subscription luncheon in the Ethel Fountain Hussey lounge of the Michigan League preceded the lecture and was attended by 120 patrons, many more coming in for the lecture given in the Grand Rapids room.

The table decorations were done by Miss Ethel Towar of Sunset Rd., and the chairman of the interest group sponsoring the events was Mrs. Irene B. Johnson of Haven Ave., who introduced the speaker. Many of the containers and decorative objects used on the tables were antique Chinese pewter or porcelain, and were loaned by the First Presbyterian church women from a collection which was brought here by a Chinese merchant from his country.

The center arrangement was a grouping of fruits in the grape and citrus shades combined with ivy and placed in an antique soup tureen. On teakwood bases at each corner of the U-shaped table were colored porcelain figures and above each were blossoming leaves of umbrella plants from the University botanical gardens. Little wine cups filled with ivy were grouped with the figures. On the long tables at the sides were fruit arrangements in pewter bowls with antique vases filled with acacia and ivy, and the design was tied together by deep green linen runners through the center of the tables.

Designs made up by Mr. Goodhew before the audience and explained by him at the meeting after the luncheon, ranged from the simple line effect gained by the use of one flower and some of its own foliage in a container, to elaborate creations of all - white flowers for a wedding table, and to a special occasion design placed in a low white container and done in tall blue irises, spreading red carnations, and the more solid white hyacinths.

The unattractive effect was shown as produced by some of the common mistakes of the designer, such as spacing stems too widely, and of having them of the same length, or of using too many blossoms or too few leaves. In contrast, Mr. Goodhew demonstrated the skilled use of a single daffodil with many leaves curved just right, or of three flaming gerbera daisies in a little turquoise bowl with rosy begonia leaves, and progressed to the stately formality of many white calla lilies in a black bowl.