With The Men In Service From Ann Arbor And Vicinity: February 22, 1944 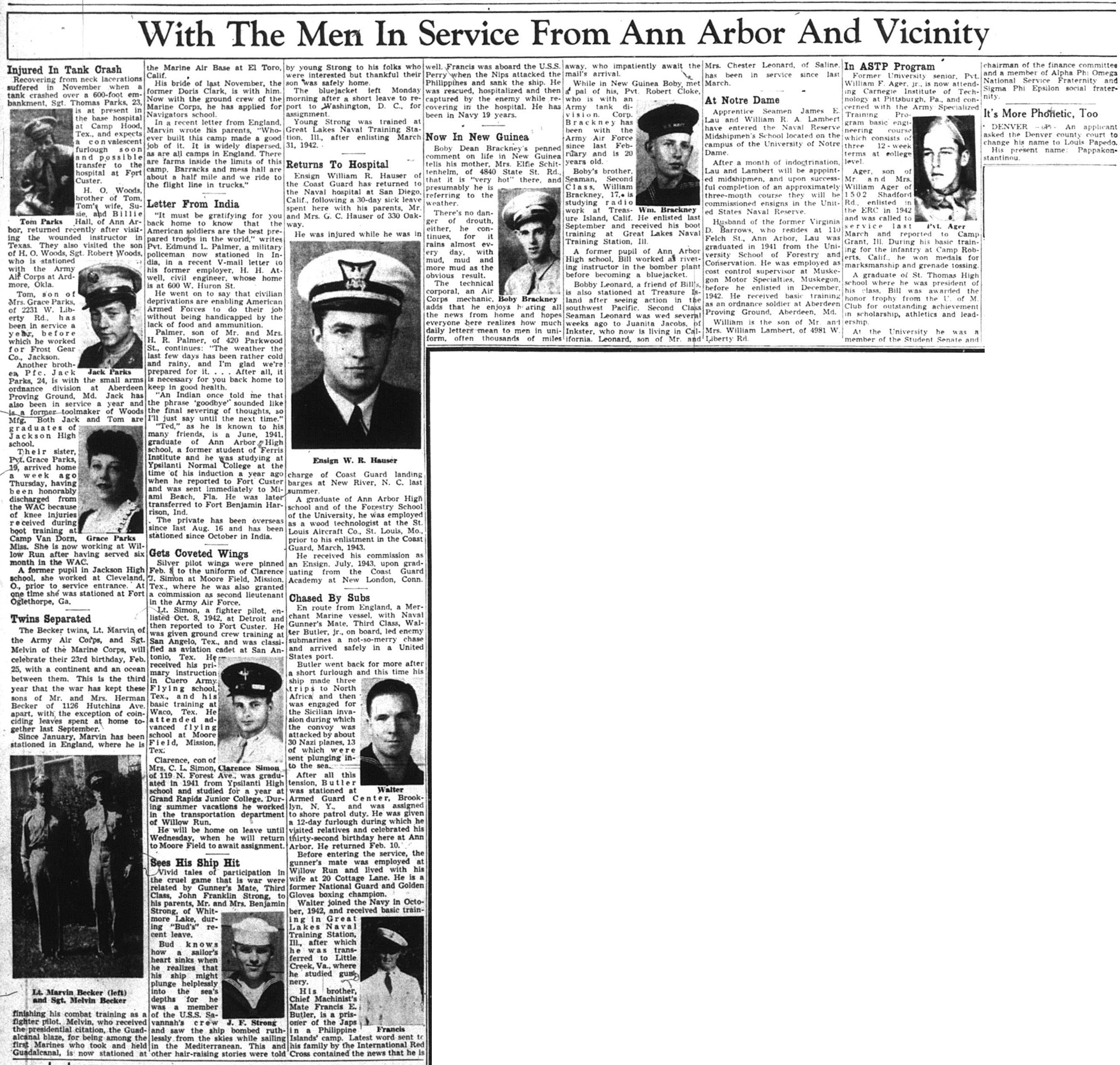 ﻿With The Men In Service From Ann Arbor And Vicinity

Recovering from neck lacerations suffered in November when a tank crashed over a 600-foot embankment, Sgt. Thomas Parks, 23, is at present in the base hospital at Camp Hood, Tex., and expects a convalescent furlough soon and possible transfer to the hospital at Fort Custer.

Tom, son of Mrs. Grace Parks, of 2231 W. Liberty Rd., has been in service for a year, before which he worked for Frost Gear Co., Jackson.

Another brother, Pfc. Jack Parks, 24, is with the small arms ordnance division at Aberdeen Proving Ground, Md. Jack has also been in service a year and is a former toolmaker of Woods Mfg. Both Jack and Tom are graduates of Jackson High school.

Their sister, Pvt. Grace Parks, 19, arrived home a week ago Thursday, having been honorably discharged from the WAC because of knee injuries received during boot training at Camp Van Dorn, Miss. She is now working at Willow Run after having served six months in the WAC.

A former pupil in Jackson High school, she worked at Cleveland, O., prior to service entrance. At one time she was stationed at Fort Oglethorpe, Ga.

The Becker twins, Lt. Marvin of the Army Air Corps, and Sgt. Melvin of the Marine Corps, will celebrate their 23rd birthday, Feb. 25, with a continent and an ocean between them. This is the third year that the war has kept these sons of Mr. and Mrs. Herman Becker of 1126 Hutchins Ave. apart, with the exception of coinciding leaves spent at home together last September.

Since January, Marvin has been stationed in England, where he is finishing his combat training as a fighter pilot. Melvin, who received the presidential citation, the Guadalcanal blaze, for being among the first Marines who took and held Guadalcanal, is now stationed at the Marine Air Base at El Toro, Calif.

His bride of last November, the former Doris Clark, is with him. Now with the ground crew of the Marine Corps, he has applied for Navigators school.

In a recent letter from England, Marvin wrote his parents, "Whoever built this camp made a good job of it. It is widely dispersed, as are all camps in England. There are farms inside the limits of this camp. Barracks and mess hall are about a half mile and we ride to the flight line in trucks."

"It must be gratifying for you back home to know that the American soldiers are the best prepared troops in the world," writes Pvt. Edmund L. Palmer, a military policeman now stationed in India. In a recent V-mail letter to his former employer, H. H. Atwell, civil engineer, whose home is at 600 W. Huron St.

He went on to say that civilian deprivations are enabling American Armed Forces to do their job without being handicapped by the lack of food and ammunition.

Palmer, son of Mr. and Mrs. H. R. Palmer, of 420 Parkwood St., continues: "The weather the last few days has been rather cold and rainy, and I'm glad we're prepared for it....After all, it is necessary for you back home to keep in good health.

"An Indian once told me that the phrase 'goodbye' sounded like the final severing of thoughts, so I'll just say until the next time."

"Ted,'' as he is known to his many friends, is a June, 1941, graduate of Ann Arbor High school, a former student of Ferris Institute and he was studying at Ypsilanti Normal College at the time of his induction a year ago when he reported to Fort Custer and was sent immediately to Miami Beach, Fla. He was later transferred to Fort Benjamin Harrison, Ind.

The private has been overseas since last Aug. 16 and has been stationed since October in India.

Silver pilot wings were pinned Feb. 8 to the uniform of Clarence Simon at Moore Field, Mission, Tex., where he was also granted a commission as second lieutenant in the Army Air Force.

Lt. Simon, a fighter pilot, enlisted Oct. 8, 1942, at Detroit and then reported to Fort Custer. He was given ground crew training at San Angelo, Tex., and was classified as aviation cadet at San Antonio, Tex. He received his primary instruction in Cuero Army Flying school, Tex., and his basic training at Waco, Tex. He attended advanced flying school at Moore Field, Mission, Tex.

Clarence, son of Mrs. C. L. Simon of 119 N. Forest Ave., was graduated in 1941 from Ypsilanti High school and studied for a year at Grand Rapids Junior College. During summer vacations he worked in the transportation department of Willow Run.

He will be home on leave until Wednesday, when he will return to Moore Field to await assignment.

Vivid tales of participation in the cruel game that is war were related by Gunner's Mate, Third Class, John Franklin Strong, to his parents, Mr. and Mrs. Strong, of Whitmore Lake, during "Bud's" recent leave.

Bud knows a sailor's heart sinks when he realizes that his ship might plunge helplessly into the sea's depths for he was a member of the U.S.S. Savannah's crew and saw the ship bombed ruthlessly from the skies while sailing in the Mediterranean. This and other hair-raising stories were told by young Strong to his folks who were interested but thankful their son was safely home.

The bluejacket left Monday morning after a short leave to report to Washington, D. C., for assignment.

Ensign William R. Hauser of the Coast Guard has returned to the Naval hospital at San Diego, Calif., following a 30-day sick leave spent here with his parents, Mr. and Mrs. G. C. Hauser of 330 Oakway.

He was injured while he was in charge of Coast Guard landing barges at New River, N. C. last summer.

A graduate of Ann Arbor High school and of the Forestry School of the University, he was employed as a wood technologist at the St. Louis Aircraft Co., St. Louis, Mo., prior to his enlistment in the Coast Guard, March, 1943.

He received his commission as an Ensign, July, 1943, upon graduating from the Coast Guard Academy at New London, Conn.

Butler went back for more after a short furlough and this time his ship made three trips to North Africa and then was engaged for the Sicilian invasion during which the convoy was attacked by about 30 Nazi planes, 13 of which were sent plunging into the sea.

After all this tension, Butler was stationed at Armed Guard Center, Brooklyn, N. Y., and was assigned to shore patrol duty. He was given a 12-day furlough during which he visited relatives and celebrated his thirty-second birthday here at Ann Arbor. He returned Feb. 10.

Before entering the service, the gunner's mate was employed at Willow Run and lived with his wife at 20 Cottage Lane. He is a former National Guard and Golden Gloves boxing champion.

Walter Joined the Navy in October, 1942, and received basic training in Great Lakes Naval Training Station, Ill., after which he was transferred to Little Creek, Va., where he studied gunnery.

Hiss brother, Chief Machinist's Mate Francis E. Butler, is a prisoner of the Japs in a Philippine Islands' camp. Latest word sent to his family by the International Red Cross contained the news that he is well. Francis was aboard the U.S.S. Perry when the Nips attacked the Philippines and sank the ship. He was rescued, hospitalized and then captured by the enemy while recovering in the hospital. He has been in Navy 19 years.

Boby Dean Brackney's penned comment on life in New Guinea tells his mother, Mrs. Elfie Schittenhelm, of 4840 State St. Rd., that it is "very hot" there, and presumably he is referring to the weather.

There's no danger of drout, either, he continues, for it rains almost every day, with mud, mud and more mud as the obvious result.

The technical corporal, an Air Corps mechanic, adds that he enjoys hearing all the news from home and hopes everyone here realizes how much daily letters mean to men in uniform, often thousands of miles away who impatiently await the mail's arrival.

While in New Guinea Boby met a pal of his, Pvt. Robert Cloke, who is with an Army tank division. Corp. Brackney has been with the Army Air Force since last February and is 20 years old.

A former pupil of Ann Arbor High school, Bill worked as riveting instructor in the bomber plant before becoming a bluejacket.

Bobby Leonard, a friend of Bill's, is also stationed at Treasure Island after seeing action in the southwest Pacific. Second Class Seaman Leonard was wed several weeks ago to Juanita Jacobs, of Inkster, who now is living in California. Leonard, son of Mr. and Mrs. Chester Leonard, of Saline, has been in service since last March.

Apprentice Seamen James E. Lau and William R. A. Lambert have entered the Naval Reserve Midshipmen's School located on the campus of the University of Notre Dame.

After a month of indoctrination, Lau and Lambert will be appointed midshipmen, and upon successful completion of an approximately three-mouth course they will be commissioned ensigns in the United States Naval Reserve.

Husband of the former Virginia D. Burrows, who resides at 110 Felch St., Ann Arbor, Lau was graduated in 1941 from the University School of Forestry and Conservation. He was employed as cost control supervisor at Muskegon Motor Specialties, Muskegon, before he enlisted in December, 1942. He received basic training as an ordnance soldier at Aberdeen Proving Ground, Aberdeen, Md.

Ager, son of Mr. and Mrs. William Ager of 1502 Shadford Rd., enlisted in the ERC in 1942 and was called to service last March and reported to Camp Grant, Ill. During his basic training for the infantry at Camp Roberts, Calif., he won medals for marksmanship and grenade tossing.

A graduate of St. Thomas High school where he was president of his class, Bill was awarded the honor trophy from the U. of M. Club for outstanding achievement in scholarship, athletics and leadership.

At the University he was a member of the Student Senate and chairman of the finance committee and a member of Alpha Phi Omega National Service Fraternity and Sigma Phi Epsilon social fraternity.