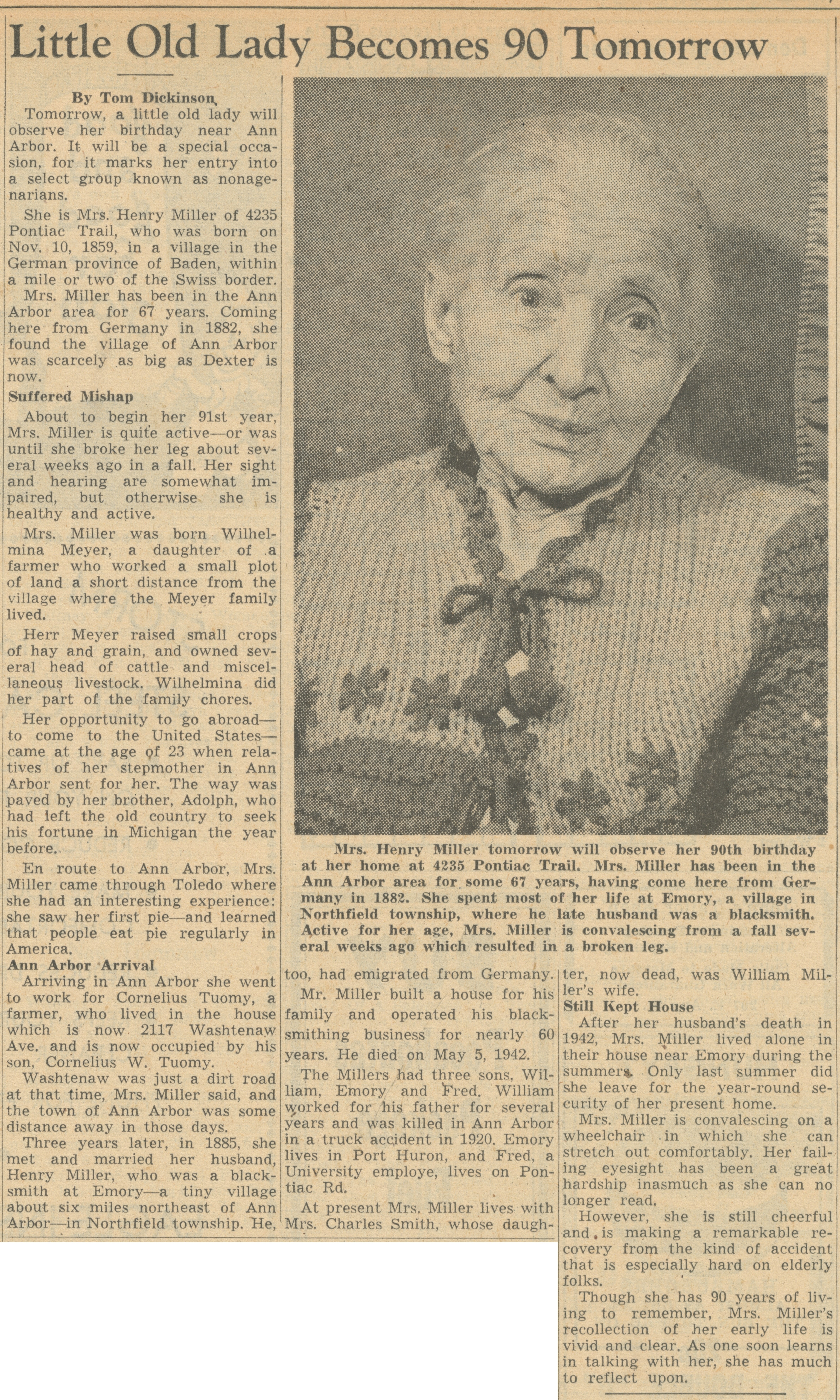 Tomorrow, a little old lady will observe her birthday near Ann Arbor. It will be a special occasion, for it marks her entry into a select group known as nonagenarians.

Mrs. Miller has been in the Ann Arbor area for 67 years. Coming here from Germany in 1882, she found the village of Ann Arbor was scarcely as big as Dexter is now.

About to begin her 91st year, Mrs. Miller is quite active—or was until she broke her leg about several weeks ago in a fall. Her sight and hearing are somewhat impaired, but otherwise she is healthy and active.

Mrs. Miller was born Wilhelmina Meyer, a daughter of a farmer who worked a small plot of land a short distance from the village where the Meyer family lived.

Herr Meyer raised small crops of hay and grain, and owned several head of cattle and miscellaneous livestock. Wilhelmina did her part of the family chores.

Her opportunity to go abroad—to come to the United States—came at the age of 23 when relatives of her stepmother in Ann Arbor sent for her. They way was paved by her brother, Adolph, who had left the old country to seek his fortune in Michigan the year before.

En route to Ann Arbor, Mrs. Miller came through Toledo where she had an interesting experience: she saw her first pie—and learned that people eat pie regularly in America.

Arriving in Ann Arbor she went to work for Cornelius Tuomy, a farmer, who lived in the house which is now 2117 Washtenaw Ave. and is now occupied by his son, Cornelius W. Tuomy.

Washtenaw was just a dirt road at that time, Mrs. Miller said, and the town of Ann Arbor was some distance away in those days.

Three years later, in 1885, she met and married her husband, Henry Miller, who was a blacksmith at Emory—a tiny village about six miles northeast of Ann Arbor—in Northfield township. He, too, had emigrated from Germany.

Mr. Miller built a house for his family and operated his blacksmithing business for nearly 60 years. He died on May 5, 1942.

The Millers had three sons, William, Emory and Fred. William worked for his father for several years and was killed in Ann Arbor in a truck accident in 1920. Emory lives in Port Huron, and Fred, a University employee, lives on Pontiac Rd.

After her husband’s death in 1942, Mrs. Miller lived alone in their house near Emory during the summers. Only last summer did she leave for the year-round security of her present home.

Mrs. Miller is convalescing on a wheelchair in which she can stretch out comfortably. Her failing eyesight has been a great hardship inasmuch as she can no longer read.

However, she is still cheerful and is making a remarkable recovery from the kind of accident that is especially hard on elderly folks.

Though she has 90 years of living to remember, Mrs. Miller’s recollection of her early life is vivid and clear. As one soon learns in talking with her, she has much to reflect upon.

IMAGE TEXT: Mrs. Henry Miller tomorrow will observe her 90th birthday at her home at 4235 Pontiac Trail. Mrs. Miller has been in the Ann Arbor area for some 67 years, having come here from Germany in 1882. She spent most of her life at Emory, a village in Northfield township, where her late husband was a blacksmith. Active for her age, Mrs. Miller is convalescing from a fall several weeks ago which resulted in a broken leg.