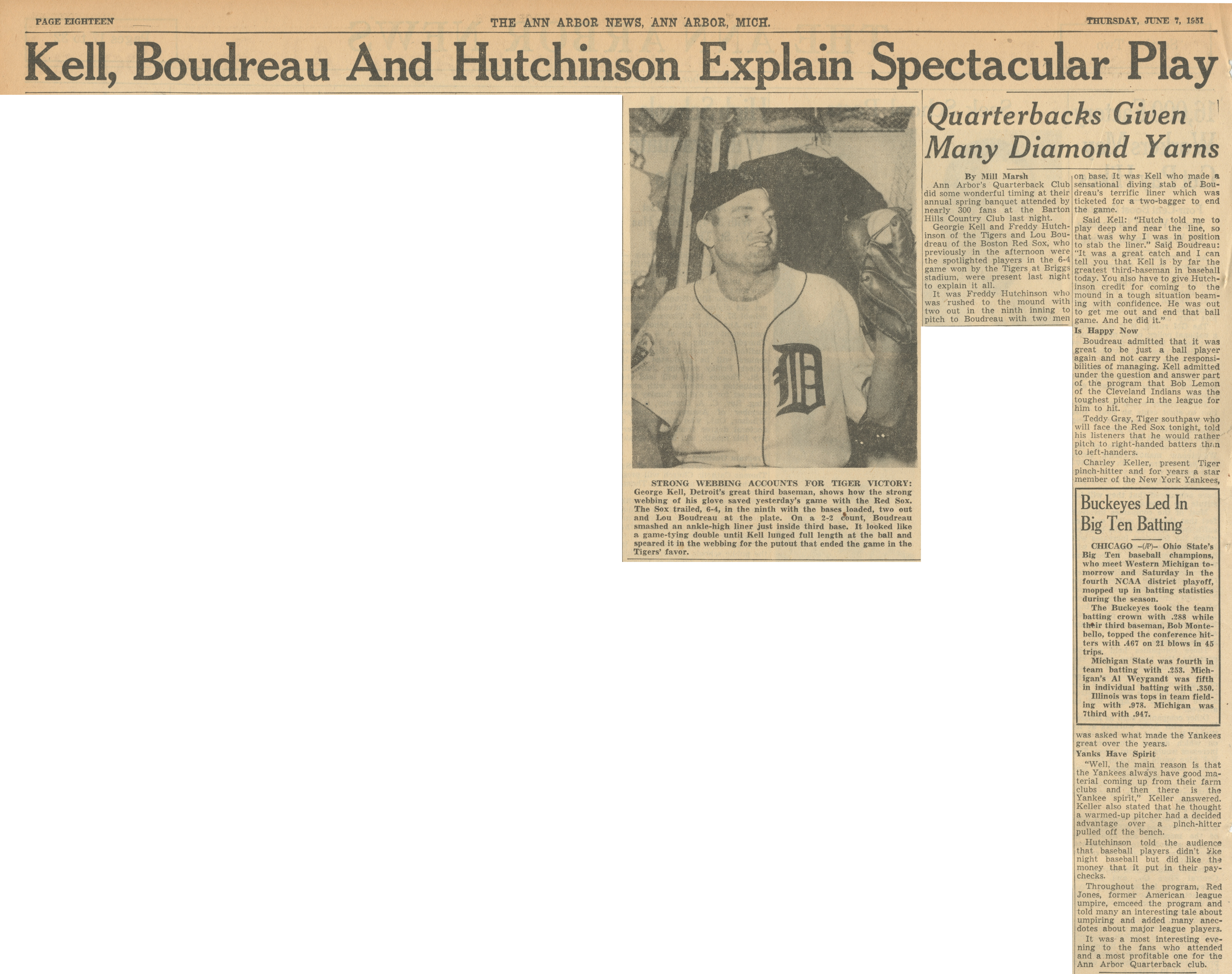 [image]  STRONG WEBBING ACCOUNTS FOR TIGER VICTORY: George Kell, Detroit’s great third baseman, shows how the strong webbing of his glove saved yesterday's game with the Red Sox. The Sox trailed, 6-4, in the ninth with the bases loaded, two out and Lou Boudreau at the plate. On a 2-2 count, Boudreau smashed an ankle-high liner just inside third base. It looked like a game-tying double until Kell lunged full length at the ball and speared it in the webbing for the putout that ended the game in the Tigers’ favor.

Quarterbacks Given Many Diamond Yarns

Georgie Kell and Freddy Hutchinson of the Tigers and Lou Boudreau of the Boston Red Sox, who previously in the afternoon were the spotlighted players in the 6-4 game won by the Tigers at Briggs stadium, were present last night to explain it all.

It was Freddy Hutchinson who was rushed to the mound with two out in the ninth inning to pitch to Boudreau with two men on base. It was Kell who made a sensational diving stab of Boudreau’s terrific liner which was ticketed for a two-bagger to end the game.

Said Kell: “Hutch told me to play deep and near the line, so that was why I was in position to stab the liner.” Said Boudreau: "It was a great catch and I can tell you that Kell is by far the greatest third-baseman in baseball today. You also have to give Hutchinson credit for coming to the mound in a tough situation beaming with confidence. He was out to get me out and end that ball game. And he did it.”

Boudreau admitted that it was great to be just a ball player again and not carry the responsibilities of managing. Kell admitted under the question and answer part of the program that Bob Lemon of the Cleveland Indians was the toughest pitcher in the league for him to hit.

Teddy Gray, Tiger southpaw who will face the Red Sox tonight, told his listeners that he would rather pitch to right-handed batters than to left-handers.

Charley Keller, present Tiger pinch-hitter and for years a star member of the New York Yankees, was asked what made the Yankees great over the years.

"Well, the main reason is that the Yankees always have good material coming up from their farm clubs and then there is the Yankee spirit,” Keller answered. Keller also stated that he thought a warmed-up pitcher had a decided advantage over a pinch-hitter pulled off the bench.

Hutchinson told the audience that baseball players didn't like night baseball but did like the money that it put in their pay-checks.

Throughout the program, Red Jones, former American league umpire, emceed the program and told many an interesting tale about umpiring and added many anecdotes about major league players.

It was a most interesting evening to the fans who attended and a most profitable one for the Ann Arbor Quarterback club.

The Buckeyes took the team batting crown with .288 while their third baseman, Bob Montebello, topped the conference hitters with .467 on 21 blows in 45 trips.