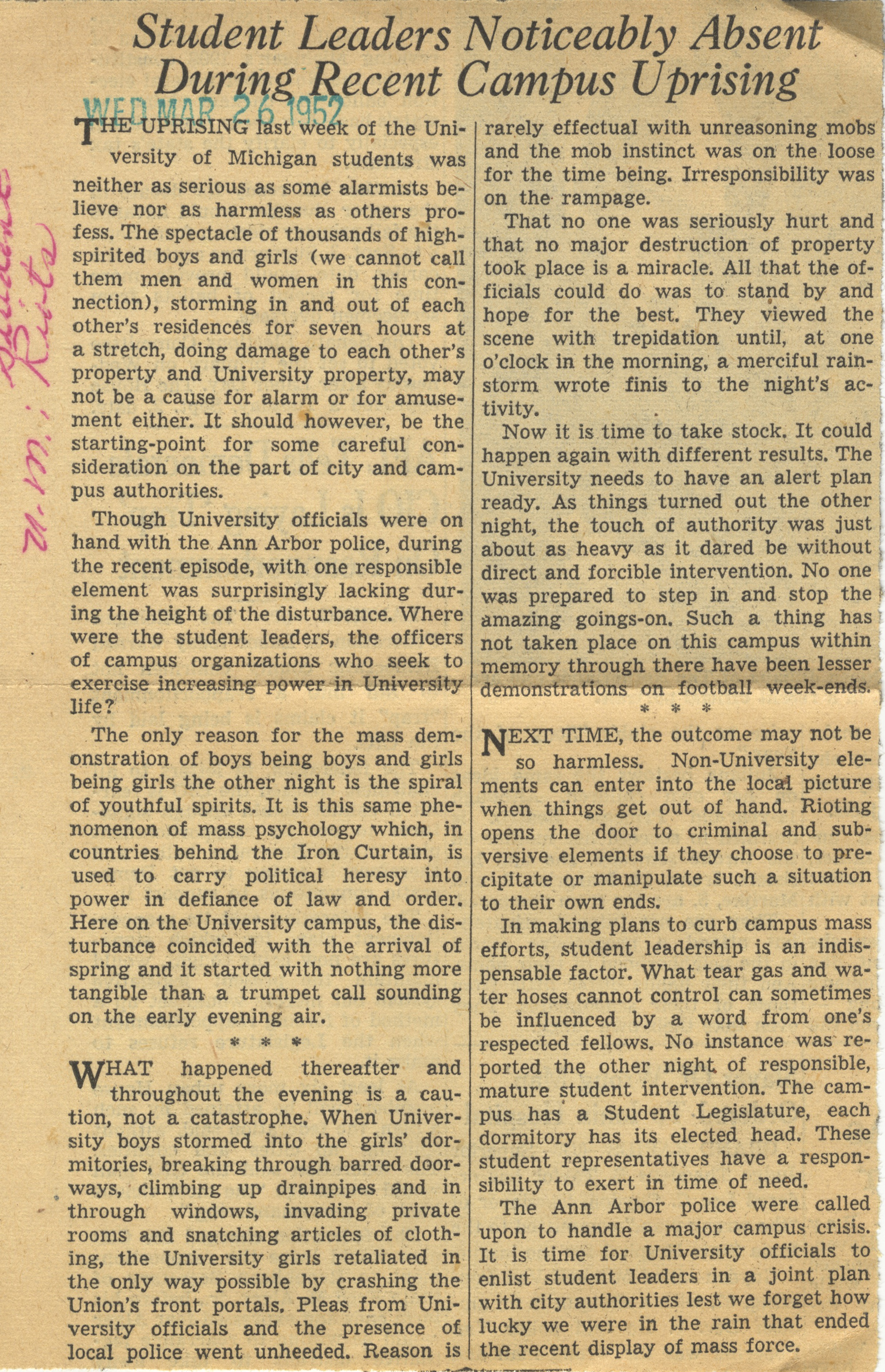 THE UPRISING last week of the University of Michigan students was neither as serious as some alarmists believe nor as harmless as others profess. The spectacle of thousands of high-spirited boys and girls (we cannot call them men and women in this connection), storming in and out of each other’s residences for seven hours at a stretch, doing damage to each other’s property and University property, may not be a cause for alarm or for amusement either. It should however, be the starting-point for some careful consideration on the part of city and campus authorities.

Though University officials were on hand with the Ann Arbor police, during the recent episode, with one responsible element was surprisingly lacking during the height of the disturbance. Where were the student leaders, the officers of campus organizations who seek to exercise increasing power in University life?

The only reason for the mass demonstration of boys being boys and girls being girls the other night is the spiral of youthful spirits. It is this same phenomenon of mass psychology which, in countries behind the Iron Curtain, is used to carry political heresy into power in defiance of law and order. Here on the University campus, the disturbance coincided with the arrival of spring and it started with nothing more tangible than a trumpet call sounding on the early evening air.

WHAT happened thereafter and throughout the evening is a caution, not a catastrophe. When University boys stormed into the girls’ dormitories, breaking through barred doorways, climbing up drainpipes and in through windows, invading private rooms and snatching articles of clothing, the University girls retaliated in the only way possible by crashing the Union’s front portals. Pleas from University officials and the presence of local police went unheeded. Reason is rarely effectual with unreasoning mobs and the mob instinct was on the loose for the time being. Irresponsibility was on the rampage.

That no one was seriously hurt and that no major destruction of property took place is a miracle. All that the officials could do was to stand by and hope for the best. They viewed the scene with trepidation until, at one o’clock in the morning, a merciful rainstorm wrote finis to the night’s activity.

Now it is time to take stock. It could happen again with different results. The University needs to have an alert plan ready. As things turned out the other night, the touch of authority was just about as heavy as it dared be without direct and forcible intervention. No one was prepared to step in and stop the amazing goings-on. Such a thing has not taken place on this campus within memory through there have been lesser demonstrations on football week-ends.

NEXT TIME, the outcome may not be so harmless. Non-University elements can enter into the local picture when things get out of hand. Rioting opens the door to criminal and subversive elements if they choose to precipitate or manipulate such a situation to their own ends.

In making plans to curb campus mass efforts, student leadership is an indispensable factor. What tear gas and water hoses cannot control can sometimes be influenced by a word from one’s respected fellows. No instance was reported the other night of responsible, mature student intervention. The campus has a Student Legislature, each dormitory has its elected head. These student representatives have a responsibility to exert in time of need.

The Ann Arbor police were called upon to handle a major campus crisis. It is time for University officials to enlist student leaders in a joint plan with city authorities lest we forget how lucky we were in the rain that ended the recent display of mass force.