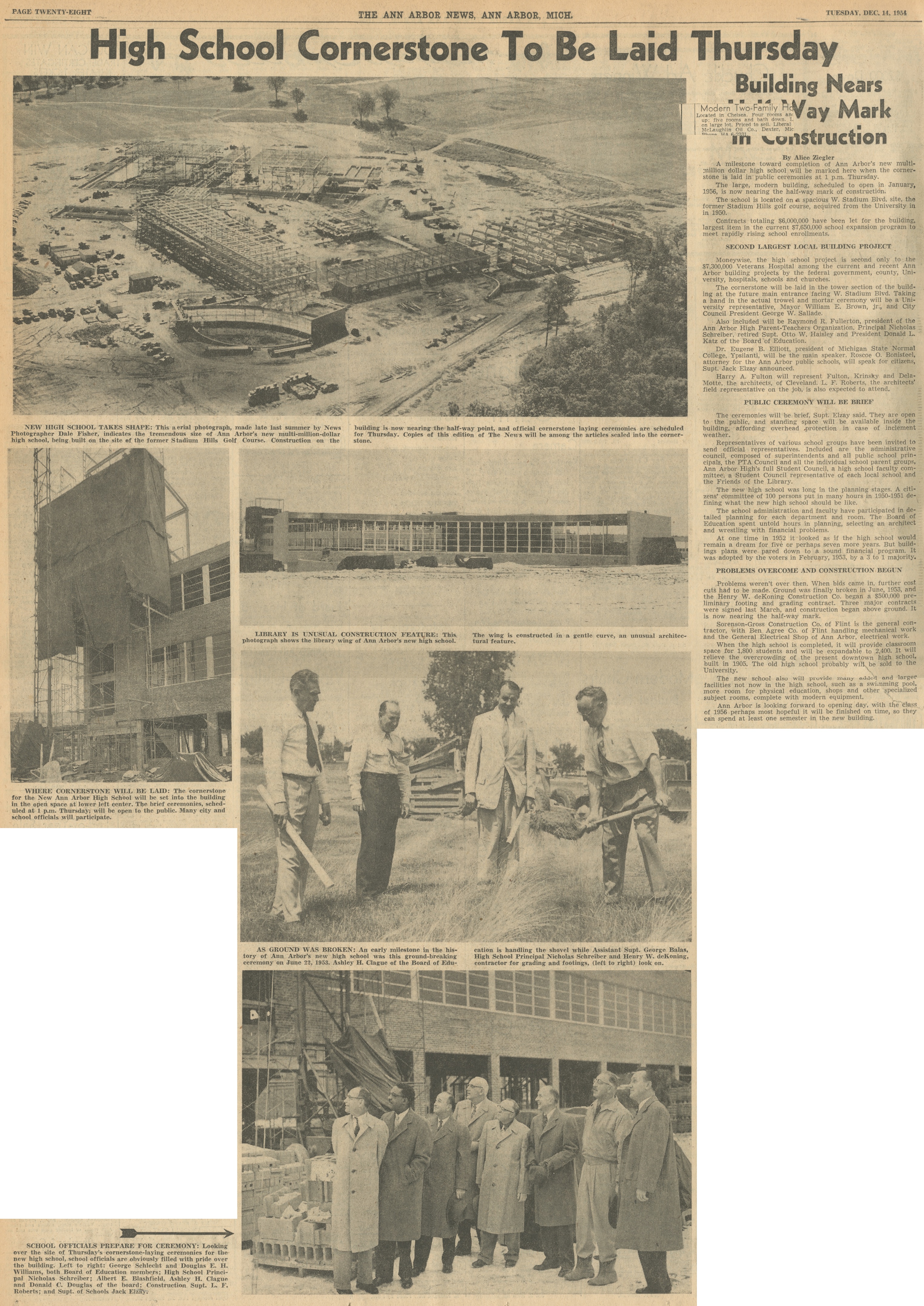 NEW HIGH SCHOOL TAKES SHAPE: This aerial photograph, made last summer by News Photographer Dale Fisher, indicates the tremendous size of Ann Arbor's new multi-million-dollar high school, being built on the site of the former Stadium Hills Golf Course. Construction on the building is now nearing the half-way point, and official cornerstone laying ceremonies are scheduled for Thursday. Copies of this edition of The News will be among the articles sealed into the cornerstone.

WHERE CORNERSTONE WILL BE LAID: The cornerstone for the New Ann Arbor High School will be set into the building in the open space at lower left center. The brief ceremonies, scheduled at 1 p.m. Thursday; will be open to the public. Many city and school officials will participate.

LIBRARY IS UNUSUAL CONSTRUCTION FEATURE: This photograph shows the library wing of Ann Arbor's new high school. The wing is constructed in a gentle curve, an unusual architectural feature.

AS GROUND WAS BROKEN: An early milestone in the history of Ann Arbor's new high school was this ground-breaking ceremony on June 22, 1953. Ashley H. Clague of the Board of Education is handling the shovel while Assistant Supt. George Balas, High School Principal Nicholas Schreiber and Henry W. deKoning, contractor for gradings and footings, (left to right) look on.

A milestone toward completion of Ann Arbor's new multi-million dollar high school will be marked here when the cornerstone is laid in public ceremonies at 1 p.m. Thursday.

The large, modern building, scheduled to open in January, 1956, is now nearing the half-way mark of construction.

The school is located on a spacious W. Stadium Blvd. site, the former Stadium Hills golf course, acquired from the University in in 1950.

Contracts totaling $6,000,000 have been let for the building, largest item in the current $7,650,000 school expansion program to meet rapidly rising school enrollments.

Moneywise, the high school project is second only to the $7,300,000 Veterans Hospital among the current and recent Ann Arbor building projects by the federal government, county, University, hospitals, schools and churches.

The cornerstone will be laid in the tower section of the building at the future main entrance facing W. Stadium Blvd. Taking a hand in the actual trowel and mortar ceremony will be a University representative, Mayor William E. Brown, jr., and City Council President George W. Sallade.

Harry A. Fulton will represent Fulton, Krinsky and DelaMotte, the architects, of Cleveland. L. F. Roberts, the architects' field representative on the job, is also expected to attend.

PUBLIC CEREMONY WILL BE BRIEF

The ceremonies will be brief, Supt. Elzay said. They are open to the public, and standing space will be available inside the building, affording overhead protection in case of inclement weather.

Representatives of various school groups have been invited to send official representatives. Included are the administrative council, composed of superintendents and all public school principals, the PTA Council and all the individual school parent groups, Ann Arbor High's full Student Council, a high school faculty committee, a Student Council representative of each local school and the Friends of the Library.

The school administration and faculty have participated in detailed planning for each department and room. The Board of Education spent untold hours in planning, selecting an architect and wrestling with financial problems.

At one time in 1952 it looked as if the high school would remain a dream for five or perhaps seven more years. But building plans were pared down to a sound financial program. It was adopted by the voters in February, 1953, by a 3 to 1 majority.

Problems weren't over then. When bids came in, further cost cuts had to be made. Ground was finally broken in June 1953, and the Henry W. deKoning Construction Co. began a $500,000 preliminary footing and grading contract. Three major contracts were signed last March, and construction began above ground. It is now nearing the half-way mark.

When the high school is completed, it will provide classroom space for 1,800 students and will be expandable to 2,400. It will relieve the overcrowding of the present downtown high school, built in 1905. The old high school probably will be sold to the University.

The new school also will provide many added and larger facilities not now in the high school, such as a swimming pool, more room for physical education, shops and other specialized subject rooms, complete with modern equipment.

Ann Arbor is looking forward to opening day, with the class of 1956 perhaps most hopeful it will be finished on time, so they can spend at least one semester in the new building.