The 'Coffee Break' - A Daily Ritual 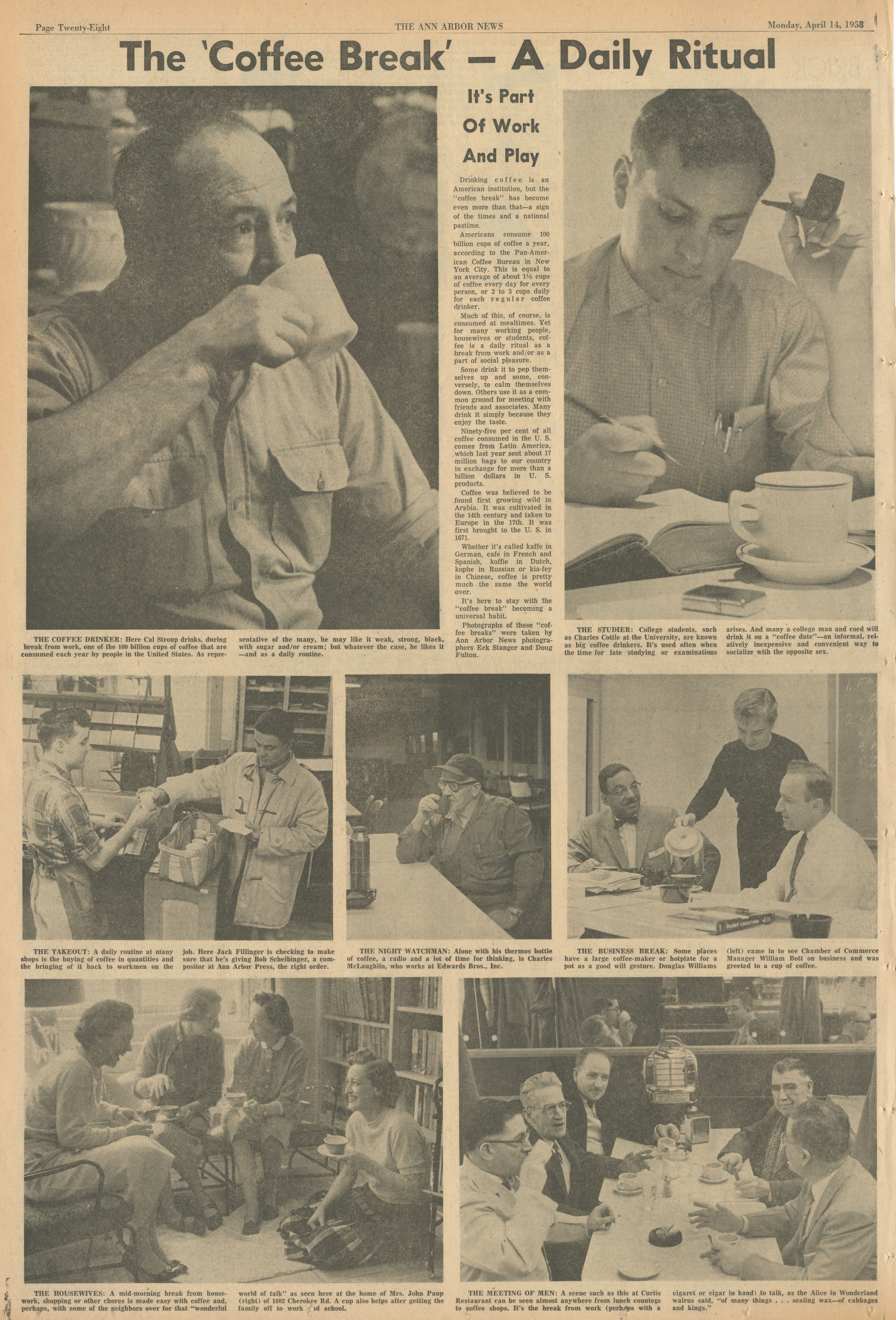 The 'Coffee Break' — A Daily Ritual

It’s Part Of Work And Play

Drinking coffee is an American institution, but the "coffee break" has become even more than  that---a sign of the times and a national pastime.

Americans consume 100 billion cups of coffee a year, according to the Pan-American Coffee Bureau in New York City. This is equal to an average of about 1 1/2 cups of coffee every day for every person, or 2 to 3 cups daily for each regular coffee drinker.

Much of this, of course, is consumed at mealtimes. Yet for many working people, housewives or students, coffee is a daily ritual as a break from work and/or as a part of social pleasure.

Some drink it to pep themselves up and some, conversely, to calm themselves down. Others use it as a common ground for meeting with friends and associates. Many drink it simply because they enjoy the taste.

Ninety-five percent of all coffee consumed in the U.S. comes from Latin America, which last year sent about 17 million bags to our country in exchange for more than a billion dollars in U.S. products.

Coffee was believed to be found first growing wild in Arabia. It was cultivated in the 14th century and taken to Europe in the 17th. It was first brought to the U.S. in 1671.

Whether it's called kaffe in German, cafe in French and Spanish, coffee in Dutch, kophe in Russian or kia-fey in Chinese, coffee is pretty much the same the world over.

It's here to stay with the "coffee break" becoming a universal habit.

THE COFFEE DRINKER: Here Cal Stroup drinks, during break from work, one of the 100 billion cups of coffee that are consumed each year by people in the United States. As representative of the many, he may like it weak, strong, black, with sugar and/or cream; but whatever the case, he likes it----and as a daily routine.

THE STUDIER: College students, such as Charles Cottle at the University, are known as big coffee drinkers. It's used often when time for late studying or examinations arises. And many a college man and coed will drink it on a "coffee date"----an informal, relatively inexpensive and convenient way to socialize with the opposite sex.

THE TAKEOUT: A daily routine at many shops is the buying of coffee in quantities and bringing it back to workmen on the job. Here Jack Fillinger is checking to make sure that he's giving Bob Scheibinger, a compositor at Ann Arbor Press, the right order.

THE NIGHT WATCHMAN: Alone with his thermos bottle of coffee, a radio and a lot of time for thinking, is Charles McLaughlin, who works at Edwards Bros., Inc.

THE BUSINESS BREAK: Some places have a large coffee-maker or hotplate for a pot as a good will gesture. Douglas Williams (left) came in to see Chamber of Commerce Manager William Bott on business and was greeted to a cup of coffee.

THE HOUSEWIVES: A mid-morning break from housework, shopping or other chores is made easy with coffee and, perhaps, with some of the neighbors over for that "wonderful world of talk" as seen here at the home of Mrs. John Paul (right) of 1602 Cherokee Rd. A cup also helps after getting the family off to work and school.

THE MEETING OF MEN: A scene such as this at Curtis Restaurant can be seen almost anywhere from lunch counters to coffee shops. It's the break from work (perhaps with a cigaret or cigar in hand) to talk, as the Alice in Wonderland walrus said, "of many things...sealing wax----of cabbages and kings."