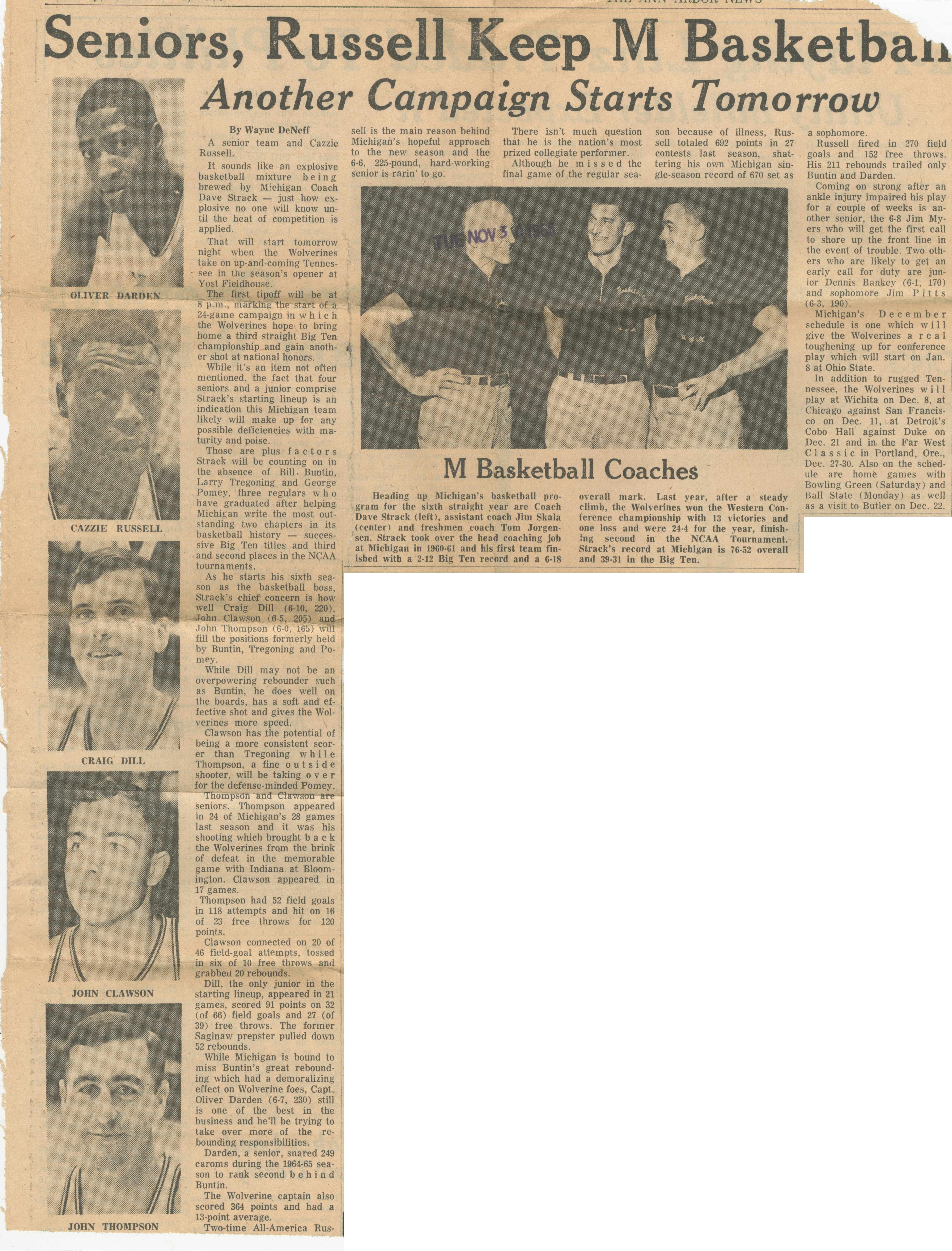 A senior team and Cazzie Russell.

It sounds like an explosive basketball mixture being brewed by Michigan Coach Dave Strack — just how explosive no one will know until the heat of competition is applied.

That will start tomorrow night when the Wolverines take on up-and-coming Tennessee in the season’s opener at Yost Fieldhouse.

The first tipoff will be at 8 p.m. marking the start of a 24-game campaign in which the Wolverines hope to bring home a third straight Big Ten championship and gain another shot at national honors.

While it’s an item not often mentioned, the fact that four seniors and a junior comprise Strack’s starting lineup is an indication this Michigan team likely will make up for any possible deficiencies with maturity and poise.

Those are plus factors Strack will be counting on in the absence of Bill Buntin, Larry Tregoning and George Pomey, three regulars who have graduated after helping Michigan write the most outstanding two chapters in its basketball history — successive Big Ten titles and third and second places in the NCAA tournaments.

While Dill may not be an overpowering rebounder such as Buntin, he does well on the boards, has a soft and effective shot and gives the Wolverines more speed.

Clawson has the potential of being a more consistent scorer than Tregoning while Thompson, a fine outside shooter, will be taking over the defense-minded Pomey.

Thompson and Clawson are seniors. Thompson appeared in 24 of Michigan’s 28 games last season and it was his shooting which brought back the Wolverines from the brink of defeat in the memorable game with Indiana at Bloomington. Clawson appeared in 17 games.

Clawson connected on 20 of 46 field-goal attempts, tossed in six of 10 free throws and grabbed 20 rebounds.

Dill, the only junior in the starting lineup, appeared in 21 games, scored 91 points on 32 (of 66) field goals and 27 (of 39) free throws. The former Saginaw prepster pulled down 52 rebounds.

While Michigan is bound to miss Buntin’s great rebounding which had a demoralizing effect on Wolverine foes, Capt. Oliver Darden (6-7, 230) still is one of the best in the business and he’ll be trying to take over more of the rebounding responsibilities.

Darden, a senior, snared 249 caroms during the 1964-65 season to rank second behind Buntin.

The Wolverine captain also scored 364 points and had a 13-point average.

Two-time All-America Russell is the main reason behind Michigan’s hopeful approach to the new season and the 6-6. 225-pound, hard-working senior is rarin’ to go.

There isn't much question that he is the nation's most prized collegiate performer.

Although he missed the final game of the regular season because of illness, Russell totaled 692 points in 27 contests last season, shattering his own Michigan single-season record of 670 set as a sophomore.

Russell fired in 270 field goals and 152 free throws. His 211 rebounds trailed only Buntin and Darden.

Coming on strong after an ankle injury impaired his play for a couple of weeks is another senior, the 6-8 Jim Myers who will get the first call to shore up the front line in the event of trouble. Two others who are likely to get an early call for duty are junior Dennis Banke.v (6-1, 170) and sophomore Jim Pitts (6-3. 190).

Michigan’s December schedule is one which will give the Wolverines areal toughening up for conference play which will start on Jan. 8 at Ohio State.

In addition to rugged Tennessee, the Wolverines will play at Wichita on Dec. 8, at Chicago against San Francisco on Dec. 11, at Detroit’s Cobo Hall against Duke on Dec. 21 and in the Far West Classic in Portland, Ore., Dec. 27-30. Also on the schedule are home games with Bowling Green (Saturday) and Ball State (Monday) as well as a visit to Butler on Dec. 22.

Heading up Michigan's basketball program for the sixth straight year are Coach Dave Strack (left), assistant coach Jim Skala (center) and freshmen coach Tom Jorgensen. Strack took over the head coaching job at Michigan in 1960-61 and his first team finished with a 2-12 Big Ten record and a 6-18 overall mark. Last year, after a steady climb, the Wolverines won the Western Conference championship with 13 victories and one loss and were 24-4 for the year, finishing second in the NCAA Tournament. Strack’s record at Michigan is 76-52 overall and 39-31 in the Big Ten.