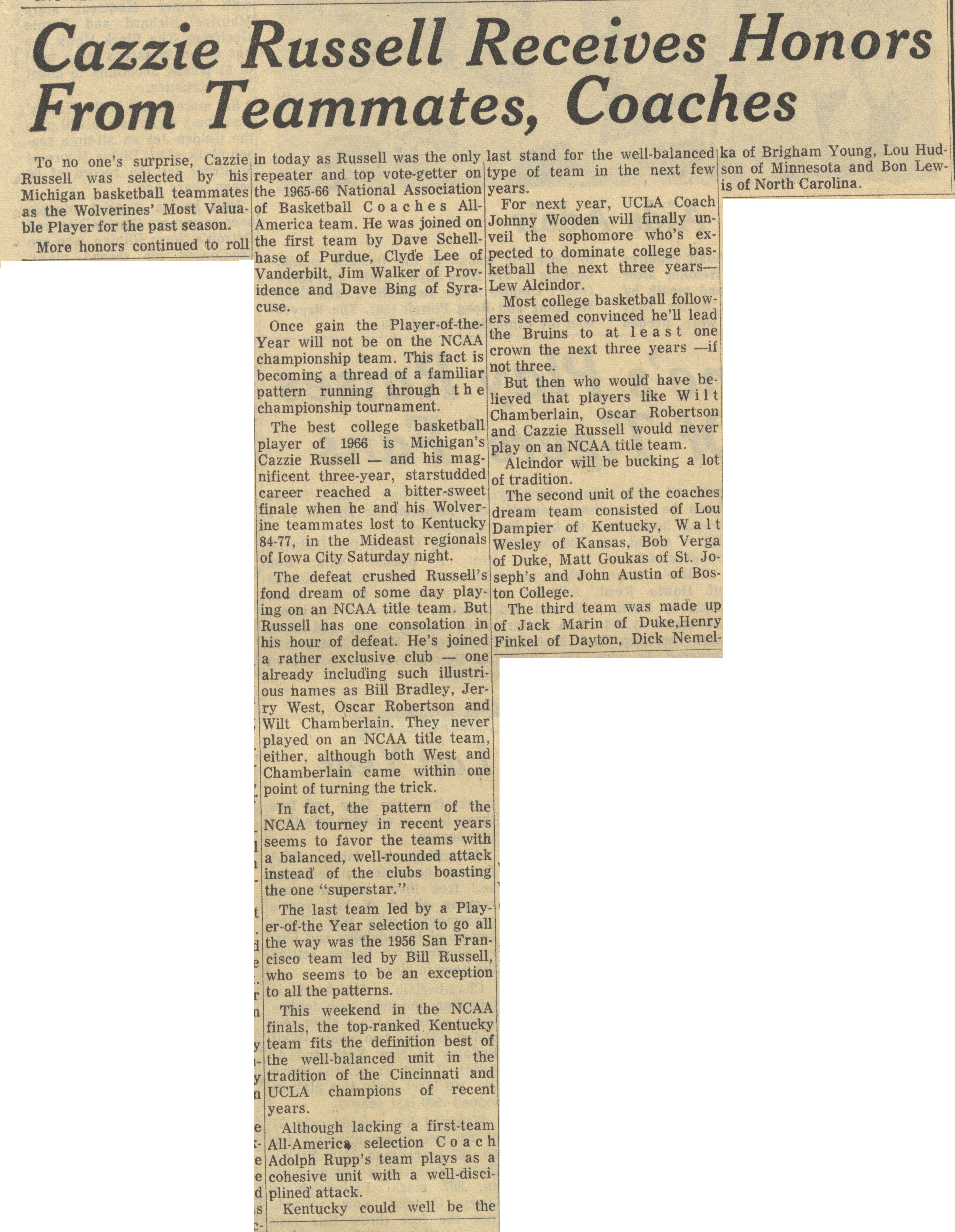 To no one's surprise, Cazzie; in today as Russell was the only.last stand for the well-balanced ka of Brigham Young, Lou Hud
Russell was selected by hisjrepeater and top vote-getter onjtype of team in the next few son of Minnesota and Bon Lew
Michigan basketball teammates | the 1965-66 National Association years. ' is of North Carolina.
as the Wolverines' Most Valua-iof Basketball Coaches All- For next year, UCLA Coach
ble Player for the past season, iAmerica team. He was joined on Johnny Wooden will finally un-
More honors continued to roll I the first team by Dave ScheU- veil the sophomore who's ex-

Once gain the Player-of-the- ers seemed convinced he'll lead
Year will not be on the NCAA the Brums t0 at least one
championship team. This fact is crown the next three ^'^ -lf
becoming a thread of a familiar!1101 t"r.ee• , „ . ,
.pattern ruwn? though t h e ,. Butthen wh0 would have be-

The best coneoe uasketball ^d pazzie Russell would never
player of 1966 is Michigan s ^ ^ ^ ^AA title team.
Cazzie Russell - and his mag_ Alcindor will be bucking a loS
mficent three-year, starstudded ^ tradition '
career reached a bitter-sweet The second unit of the coaches
finale when he and his Wolver-j^^ ^earn consisted of Lou
me teammates lost to Kentucky r>ampier of Kentucky, W a H
84-77, m the Mideast regionals ^^y ^ Kansas, Bob Vergil
of Iowa City Saturday night. |^ p^e ^^ ^^s of St. Jo-

The defeat crushed Russell's seph's and John Austin of Bos-
fond dream of some day play-1 ton College.
ing on an NCAA title team. But| The third team was made up
Russell has one consolation injof Jack Marin of Duke.Henry
his hour of defeat. He's joined i Finkel of Dayton, Dick Nemel-

I, a rather exclusive club — one

i Wilt -'vlain. They never
playi, .: NCAA title team,
either, although both West and
| Chamberlain came within one

'. point of turning the trick.

In fact, the pattern of the

i seems to favor the teams with

- instead of the clubs boasting
the one "superstar." ,

t The last team led by a Play-?

. er-of-the Year selection to go all

:, who seems to be an exception i

c to all the patterns.

n! Tb— weekend in the NCAA
he top-ranked Kentucky

(• the dnced unit in the

;A champions of recent
yttirs.

I Although lacking a first-team

e cohesive unit with a well-disci-

is Kentucky could well be