Broncos Make It Two In Row Over Michigan 'Nine' 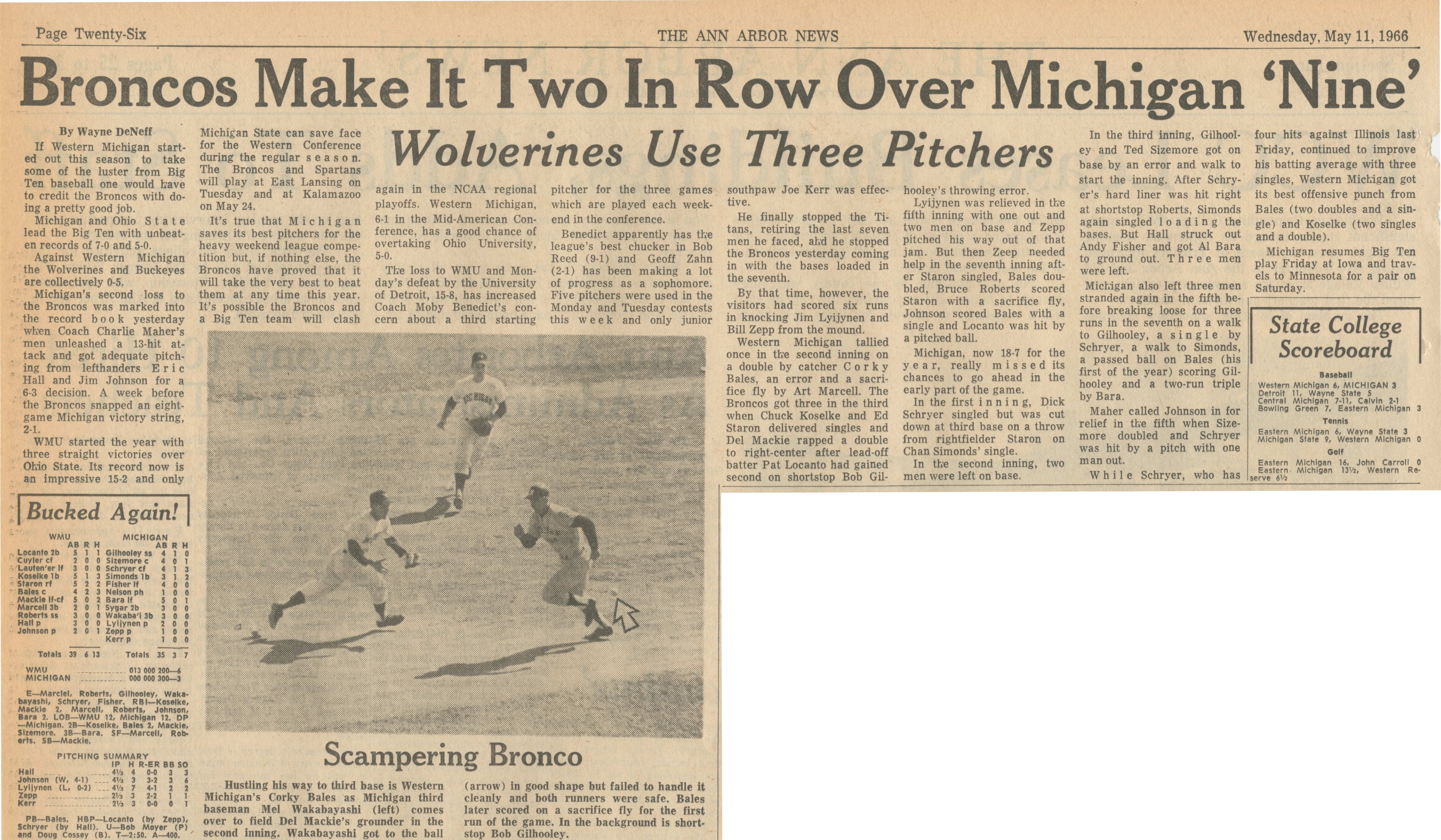 Broncos Make It Two In Row Over Michigan ‘Nine’

If Western Michigan started out this season to take some of the luster from Big Ten baseball one would have to credit the Broncos with doing a pretty good job.

Michigan and Ohio State lead the Big Ten with unbeaten records of 7-0 and 5-0.

Against Western Michigan the Wolverines and Buckeyes are collectively 0-5.

Michigan’s second loss to the Broncos was marked into the record book yesterday when Coach Charlie Maher’s men unleashed a 13-hit attack and got adequate pitching from lefthanders Eric Hall and Jim Johnson for a 6-3 decision. A week before the Broncos snapped an eight-game Michigan victory string, 2-1.

WMU started the year with three straight victories over Ohio State. Its record now is an impressive 15-2 and only Michigan State can save face for the Western Conference during the regular season. The Broncos and Spartans will play at East Lansing on Tuesday and at Kalamazoo on May 24.

It’s true that Michigan saves its best pitchers for the heavy weekend league competition but, if nothing else, the Broncos have proved that it will take the very best to beat them at any time this year. It’s possible the Broncos and a Big Ten team will clash again in the NCAA regional playoffs. Western Michigan, 6-1 in the Mid-American Conference, has a good chance of overtaking Ohio University, 5-0.

The loss to WMU and Monday’s defeat by the University of Detroit, 15-8, has increased Coach Moby Benedict’s concern about a third starting pitcher for the three games which are played each weekend in the conference.

Benedict apparently has the league's best chucker in Bob Reed (9-1) and Geoff Zahn (2-1) has been making a lot of progress as a sophomore. Five pitchers were used in the Monday and Tuesday contests this week and only junior

WMU started the year with three straight victories over Ohio State. Its record now is an impressive 15-2 and only southpaw Joe Kerr was effective.

He finally stopped the Titans, retiring the last seven men he faced, and he stopped the Broncos yesterday coming in with the bases loaded in the seventh.

By that time, however, the visitors had scored six runs in knocking Jim Lyijynen and Bill Zepp from the mound.

Western Michigan tallied once in the second inning on a double by catcher Corky Bales, an error and a sacrifice fly by Art Marcell. The Broncos got three in the third when Chuck Koselke and Ed Staron delivered singles and Del Mackie rapped a double to right-center after lead-off batter Pat Locanto had gained second on shortstop Bob Gilhooley’s throwing error.

Lyijynen was relieved in the fifth inning with one out and two men on base and Zepp pitched his way out of that jam. But then Zeep needed help in the seventh inning after Staron singled, Bales doubled, Bruce Roberts scored Staron with a sacrifice fly, Johnson scored Bales with a single and Locanto was hit by a pitched ball.

Michigan, now 18-7 for the year, really missed its chances to go ahead in the early part of the game.

In the first inning, Dick Sehryer singled but was cut down at third base on a throw from rightfielder Staron on Chan Simonds’ single.

In the second inning, two men were left on base.

In the third inning, Gilhooley and Ted Sizemore got on base by an error and walk to start the inning. After Schryer’s hard liner was hit right at shortstop Roberts, Simonds again singled loading the bases. But Hall struck out Andy Fisher and got Al Bara to ground out. Three men were left.

Michigan also left three men stranded again in the fifth before breaking loose for three runs in the seventh on a walk to Gilhooley, a single by Sehryer, a walk to Simonds, a passed ball on Bales (his first of the year) scoring Gilhooley and a two-run triple by Bara.

Maher called Johnson in for relief in the fifth when Sizemore doubled and Sehryer was hit by a pitch with one man out.

While Sehryer, who has four hits against Illinois last Friday, continued to improve his batting average with three singles, Western Michigan got its best offensive punch from Bales (two doubles and a single) and Koselke (two singles and a double).

Michigan resumes Big Ten play Friday at Iowa and travels to Minnesota for a pair on Saturday.

Hustling his way to third base is Western Michigan’s Corky Bales as Michigan third baseman Mel Wakabayashi (left) comes over to field Del Mackie’s grounder in the second inning. Wakabayashi got to the ball (arrow) in good shape but failed to handle it cleanly and both runners were safe. Bales later scored on a sacrifice fly for the first run of the game. In the background is shortstop Bob Gilhooley.