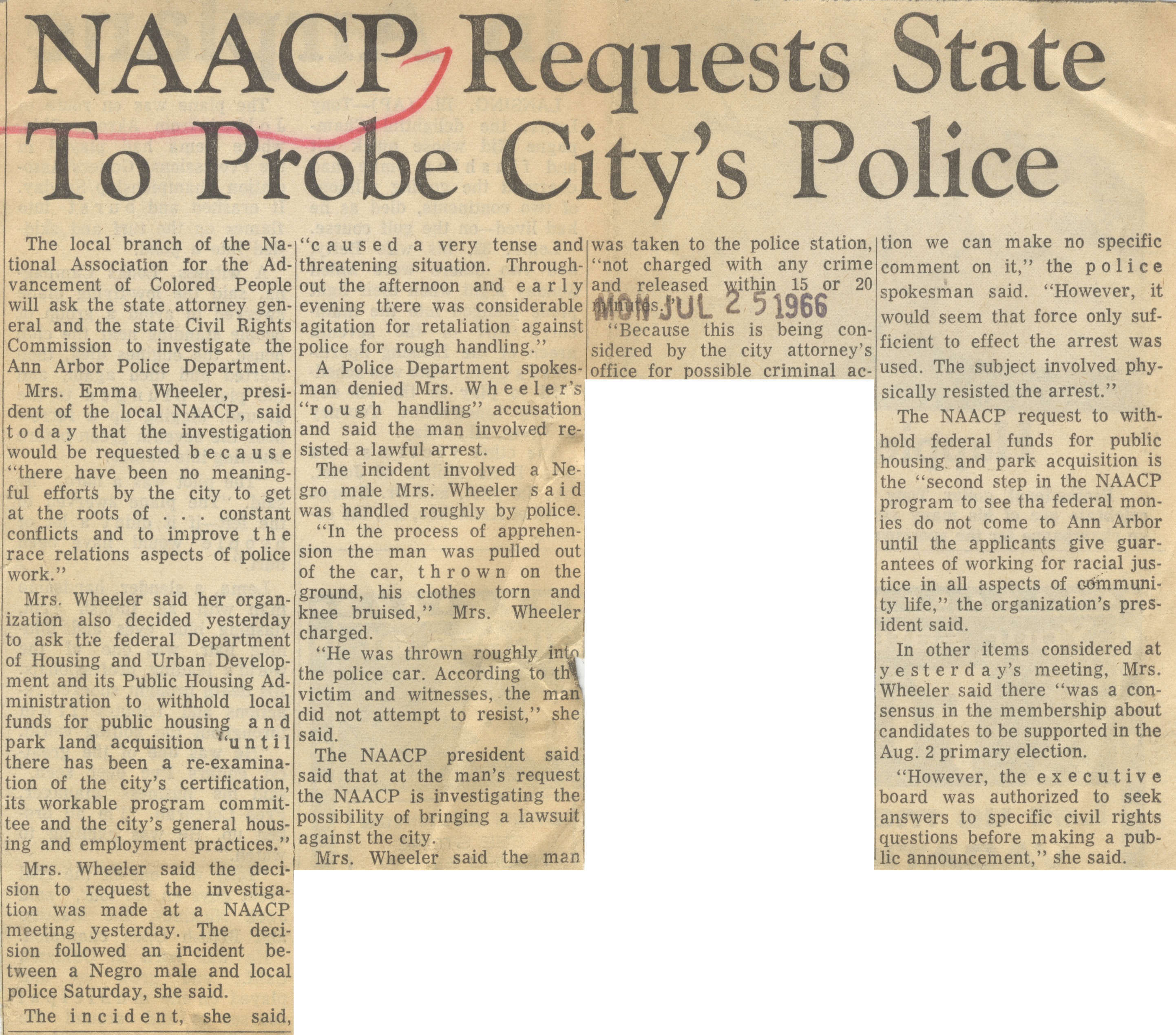 ﻿NAACP Requests State To Probe City’s Police<br><br>The local branch of the National Association lor the Advancement of Colored People will ask the state attorney general and the state Civil Rights Commission to investigate the Ann Arbor Police Department.<br><br>Mrs. Emma Wheeler, president of the local NAACP, said o d a y that the investigation would be requested because there have been no meaningful efforts by the city to get at the roots of . . . constant conflicts and to improve t h race relations aspects of police work.”<br><br>Mrs. Wheeler said her organization also decided yesterday to ask the federal Department of Housing and Urban Development and its Public Housing Administration to withhold local funds for public housing and park land acquisition n t i 1 there has been a re-examina-tion of the city’s certification, its workable program commit tee and the city’s general hous ing and employment practices.’ Mrs. Wheeler said the decision to request the investiga-was made at a NAACP meeting yesterday. The decision followed an incident between a Negro male and local police Saturday, she said.<br><br>The incident, she said,<br><br>was taken to the police station, ‘not charged with any crime and released within 15 or 20<br><br>#&MUL 2 51966<br><br>‘Because this is being considered by the city attorney's<br><br>s e d a very tense and threatening situation. Throughout the afternoon and early evening there was considerable agitation for retaliation against<br><br>police for rough handling.” _________________ __<br><br>A Police Department spokes- office for possible criminal man denied Mrs. Wheeler's ugh handling” accusation and said the man involved resisted a lawful arrest.<br><br>The incident involved a Nero male Mrs. Wheeler said as handled roughly by police.<br><br>“In the process of apprehension the man was pulled out of the car, thrown on the ground, his clothes torn and knee bruised,” Mrs. Wheeler charged.<br><br>He was thrown roughly ink1 the police car. According to tm victim and witnesses, the man' did not attempt to resist,” she lid.<br><br>The NAACP president said said that at the man’s request the NAACP is investigating the possibility of bringing a lawsuit against the city.<br><br>Mrs. Wheeler said the man<br><br>tion we can make no specific comment on it,” the police spokesman said. “However, it would seem that force only sufficient to effect the arrest was used. The subject involved physically resisted the arrest.”<br><br>The NAACP request to withhold federal funds for public housing, and park acquisition is the “second step in the NAACP program to see tha federal monies do not come to Ann Arbor until the applicants give guarantees of working for racial justice in all aspects of community life,” the organization’s president said.<br><br>In other items considered at y e s t e r d a y’s meeting, Mrs. Wheeler said there “was a consensus in the membership about candidates to be supported in the Aug. 2 primary election.<br><br>“However, the executive board was authorized to seek answers to specific civil rights questions before making a public announcement,” she said.