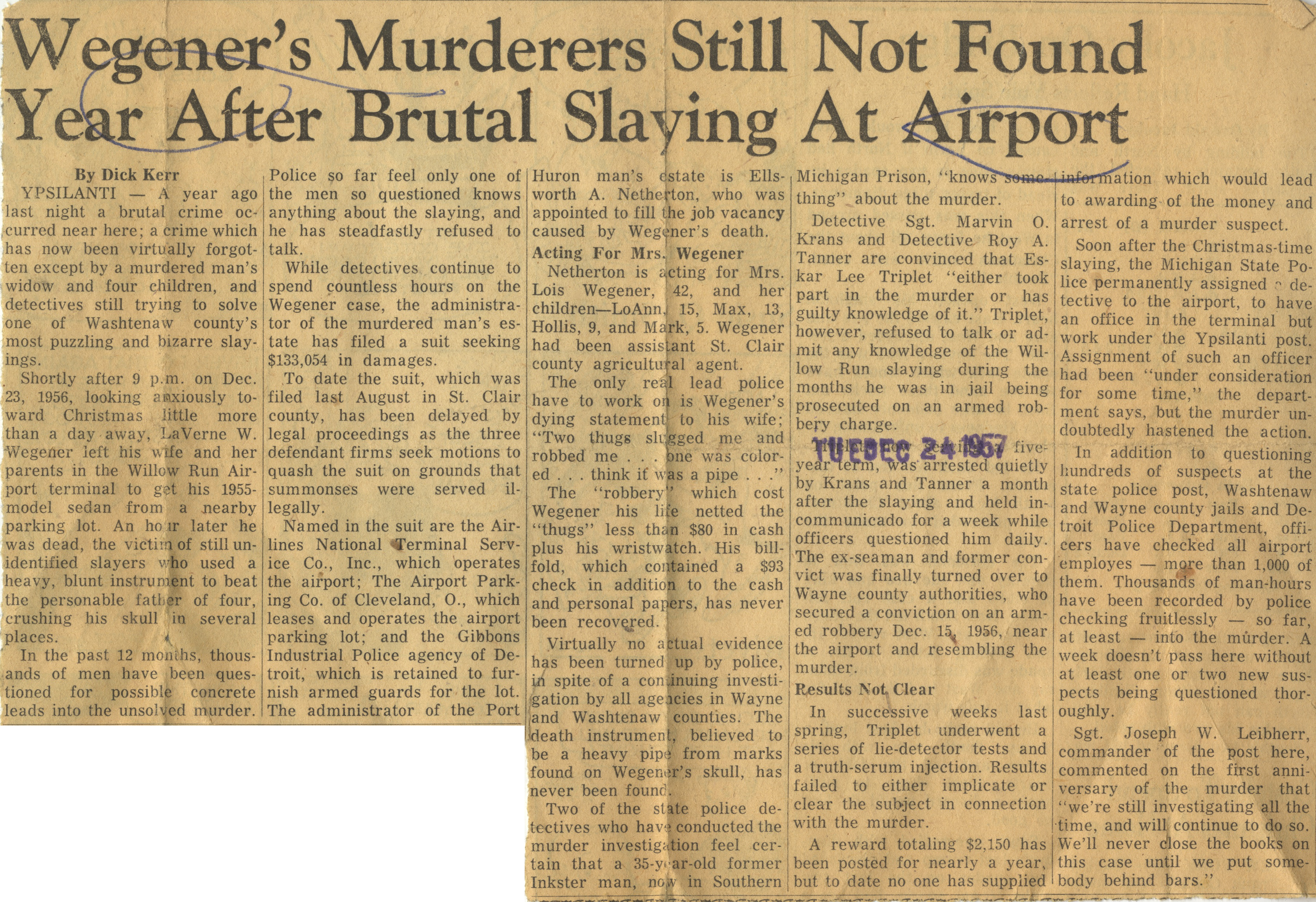 YPSILANTI — A year ago Iast night a brutal crime occurred near here; a crime which has now been virtually forgotten except by a murdered man’s widow and four children, and detectives still trying to solve one of Washtenaw county’s most puzzling and bizarre slayings.

Shortly after 9 p.m. on Dec. 23, 1956, looking anxiously toward Christmas little more than a day away, LaVerne W. Wegener left his wife and her parents in the Willow Run Airport terminal to get his 1955-model sedan from a nearby parking lot. An hour later he was dead, the victim of still unidentified slayers who used a heavy, blunt instrument to beat the personable father of four, crushing his skull in several places.

In the past 12 months, thousands of men have been questioned for possible concrete leads into the unsolved murder.

Police so far feel only one of the men so questioned knows anything about the slaying, and  he has steadfastly refused to talk.

While detectives continue to spend countless hours on the Wegener case, the administrator of the murdered man’s estate has filed a suit seeking $133,054 in damages.

To date the suit, which was filed last August in St. Clair county, has been delayed by legal proceedings as the three defendant firms seek motions to robbed quash the suit on grounds that summonses were served illegally.

Named in the suit are the Airlines National Terminal Service Co., Inc., which operates the airport; The Airport Parking Co. of Cleveland, O., which leases and operates the airport parking lot; and the Gibbons Industrial Police agency of Detroit, which is retained to furnish armed guards for the lot. The administrator of the Port

Huron man's estate is Ellsworth A. Netherton, who was appointed to fill the job vacancy caused by Wegener's death.

Netherton is acting for Mrs. Lois Wegener, 42, and her children--LoAnn, 15, Max, 13, Hollis, 9, and Mark, 5. Wegener had been assistant St. Clair county agricultural agent.

The only real lead police have to work on is Wegener's dying statement to his wife: "Two thugs slugged me and robbed me . . . one was colored . . . think it was a pipe . . ."

The "robbery" which cost Wegener his life netted the "thugs" less than $80 in cash plus his wristwatch. His billfold, which contained a $93 check in addition to the cash and personal papers, has never been recovered.

Virtually no actual evidence has been turned up by police, in spite of a continuing investigation by all agencies in Wayne and Washtenaw counties. The death instrument, believed to be a heavy pipe from marks found on Wegener's skull, has never been found.

Two of the state police detectives who have conducted the murder investigation feel certain that a 35-year-old former Inkster man, now in Southern

Michigan Prison, "knows something" about the murder.

Detective Sgt. Marvin O. Krans and Detective Roy A. Tanner are convinced that Eskar Lee Triplet "either took part in the murder or has guilty knowledge of it." Triplet, however, refused to talk or admit any knowledge of the Willow Run slaying during the months he was in jail being prosecuted on an armed robbery charge.

five-year term, was arrested quietly by Krans and Tanner a month after the slaying and held incommunicado for a week while officers questioned him daily. The ex-seaman and former convict was finally turned over to Wayne county authorities, who secured a conviction on an armed robbery Dec. 15, 1956, near the airport and resembling the murder.

In successive weeks last spring, Triplet underwent a series of lie-detector tests and a truth-serum injection. Results failed to either implicate or clear the subject in connection with the murder.

A reward totaling $2150 has been posted for nearly a year, but to date no one has supplied

information which would lead to awarding the money and arrest of a murder suspect.

Soon after the Christmas-time slaying, the Michigan State Police permanently assigned a detective to the airport, to have an office in the terminal but work under the Ypsilanti post. Assignment of such an officer had been “under consideration for some time,” the department says, but the murder undoubtedly hastened the action.

In addition to questioning hundreds of suspects at the state police post, Washtenaw and Wayne county jails and Detroit Police Department, officers have checked all airport employes — more than 1,000 of them. Thousands of man-hours have been recorded by police checking fruitlessly — so far, at least — info the murder. A week doesn’t pass here without at least one or two new suspects being questioned thoroughly.

Sgt. Joseph W. Leibherr, commander of the post here, commented on the first anniversary of the murder that “we re still investigating all the time, and will continue to do so. We’ll never dose the books on this case until we put somebody behind bars.”