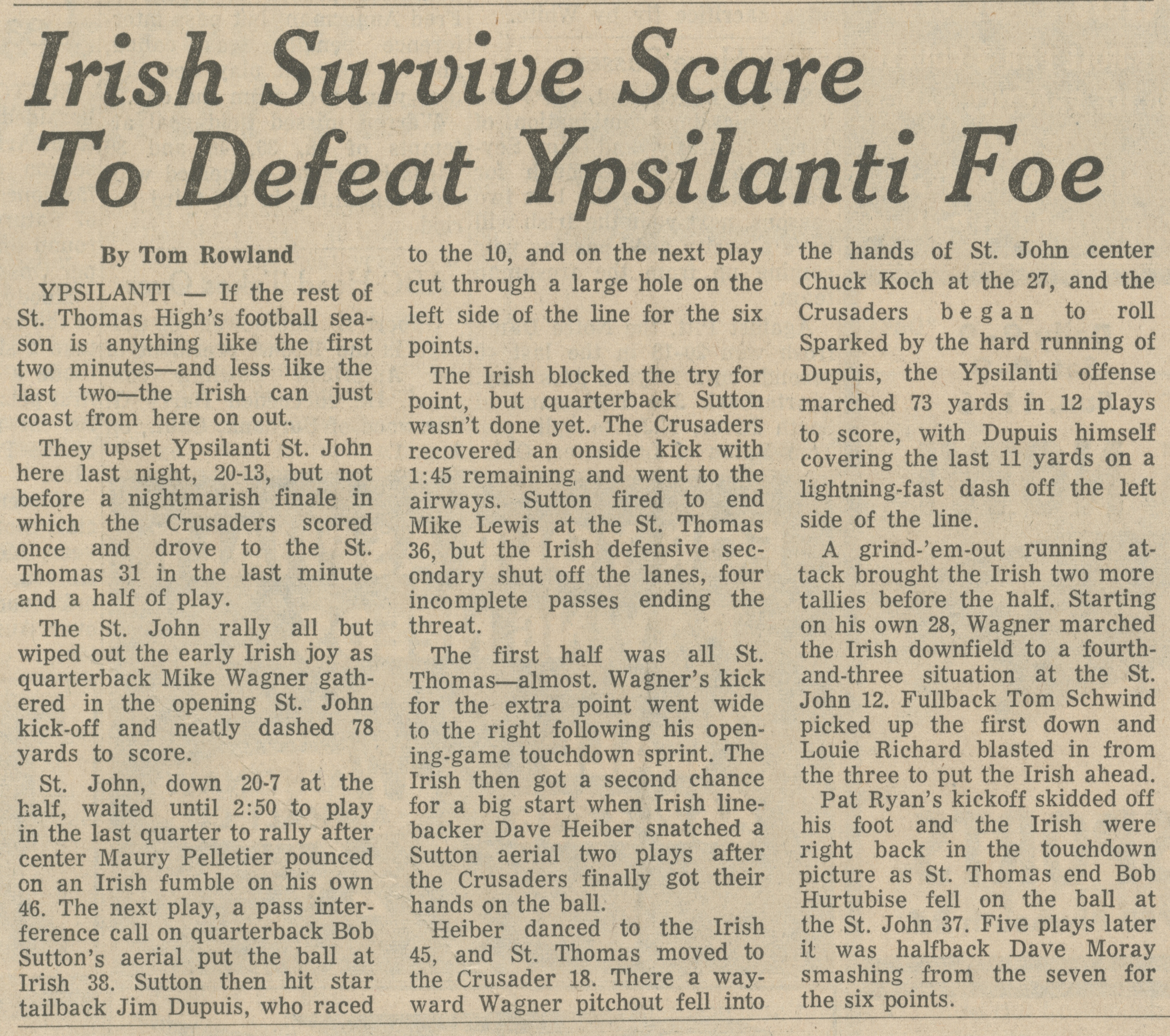 YPSILANTI — If the rest of St. Thomas High’s football season is anything like the first two minutes—and less like the last two—the Irish can just coast from here on out.

They upset Ypsilanti St. John here last night, 20-13, but not before a nightmarish finale in which the Crusaders scored once and drove to the St. Thomas 31 in the last minute and a half of play.

The St. John rally all but wiped out the early Irish joy as quarterback Mike Wagner gathered in the opening St. John kick-off and neatly dashed 78 yards to score.

St. John, down 20-7 at the half, waited until 2:50 to play in the last quarter to rally after center Maury Pelletier pounced on an Irish fumble on his own 46. The next play, a pass interference call on quarterback Bob Sutton’s aerial put the ball at Irish 38. Sutton then hit star tailback Jim Dupuis, who raced to the 10, and on the next play cut through a large hole on the left side of the line for the six points.

The Irish blocked the try for point, but quarterback Sutton wasn’t done yet. The Crusaders recovered an onside kick with 1:45 remaining and went to the airways. Sutton fired to end Mike Lewis at the St. Thomas 36, but the Irish defensive secondary shut off the lanes, four incomplete passes ending the threat.

The first half was all St. Thomas—almost. Wagner’s kick for the extra point went wide to the right following his opening-game touchdown sprint. The Irish then got a second chance for a big start when Irish linebacker Dave Heiber snatched a Sutton aerial two plays after the Crusaders finally got their hands on the ball.

Heiber danced to the Irish 45, and St. Thomas moved to the Crusader 18. There a wayward Wagner pitchout fell into the hands of St. John center Chuck Koch at the 27, and the Crusaders began to roll. Sparked by the hard running of Dupuis, the Ypsilanti offense marched 73 yards in 12 plays to score, with Dupuis himself covering the last 11 yards on a lightning-fast dash off the left side of the line.

A grind-’em-out running attack brought the Irish two more tallies before the half. Starting on his own 28, Wagper marched the Irish downfield to a fourth-and-three situation at the St. John 12. Fullback Tom Schwind picked up the first down and Louie Richard blasted in from the three to put the Irish ahead.

Pat Ryan’s kickoff skidded off his foot and the Irish were right back in the touchdown picture as St. Thomas end Bob Hurtubise fell on the ball at the St. John 37. Five plays later it was halfback Dave Moray smashing from the seven for the six points.