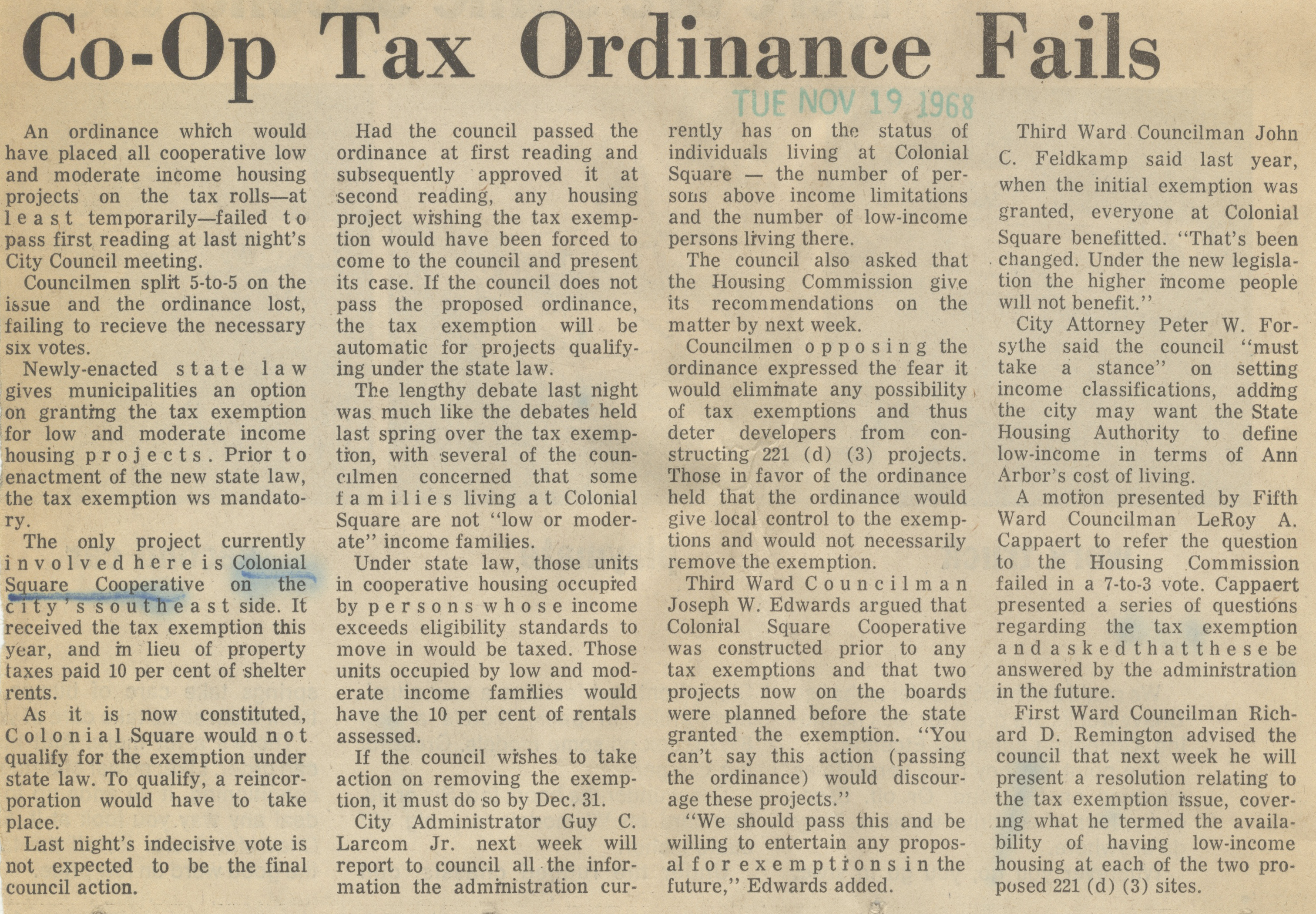 An ordinance which would have placed all cooperative low and moderate income housing projects on the tax rolls—at least temporarily—failed to pass first reading at last night’s City Council meeting.

Councilmen split 5-to-5 on the issue and the ordinance lost, failing to recieve the necessary six votes.

The only project currently involved here is Colonial Square Cooperative on the on the city's southeast side. It received the tax exemption this year, and in lieu of property taxes paid 10 per cent of shelter rents.

As it is now constituted, Colonial Square would not qualify for the exemption under state law. To qualify, a reincorporation would have to take place.

Last night's indecisive vote is not expected to be the final council action.

The lengthy debate last night was much like the debates held last spring over the tax exemption, with several of the councilmen concerned that some families living at Colonial Square are not “low or moderate” income families.

Under state law, those units in cooperative housing occupied by persons whose income exceeds eligibility standards to move in would be taxed. Those units occupied by low and moderate income families would have the 10 per cent of rentals assessed.

If the council wishes to take action on removing the exemption, it must do so by Dec. 31.

City Administrator Guy C. Larcom Jr. next week will report to council all the information the administration currently has on the status of individuals living at Colonial Square — the number of persons above income limitations and the number of low-income persons living there.

The council also asked that the Housing Commission give its recommendations on the matter by next week.

Third Ward Councilman Joseph W. Edwards argued that Colonial Square Cooperative was constructed prior to any tax exemptions and that two projects now on the boards were planned before the state granted the exemption. “You can’t say this action (passing the ordinance) would discourage these projects.”

“We should pass this and be willing to entertain any proposal for exemptions in the future,” Edwards added.

Third Ward Councilman John C. Feldkamp said last year, when the initial exemption was granted, everyone at Colonial Square benefitted. “That’s been changed. Under the new legislation the higher income people will not benefit.”

City Attorney Peter W. Forsythe said the council “must take a stance” on setting income classifications, adding the city may want the State Housing Authority to define low-income in terms of Ann Arbor’s cost of living.

A motion presented by Fifth Ward Councilman LeRoy A. Cappaert to refer the question to the Housing Commission failed in a 7-to-3 vote. Cappaert presented a series of questions regarding the tax exemption and asked that these be answered by the administration in the future.

First Ward Councilman Richard D. Remington advised the council that next week he will present a resolution relating to the tax exemption issue, covering what he termed the availability of having low-income housing at each of the two proposed 221 (d) (3) sites.