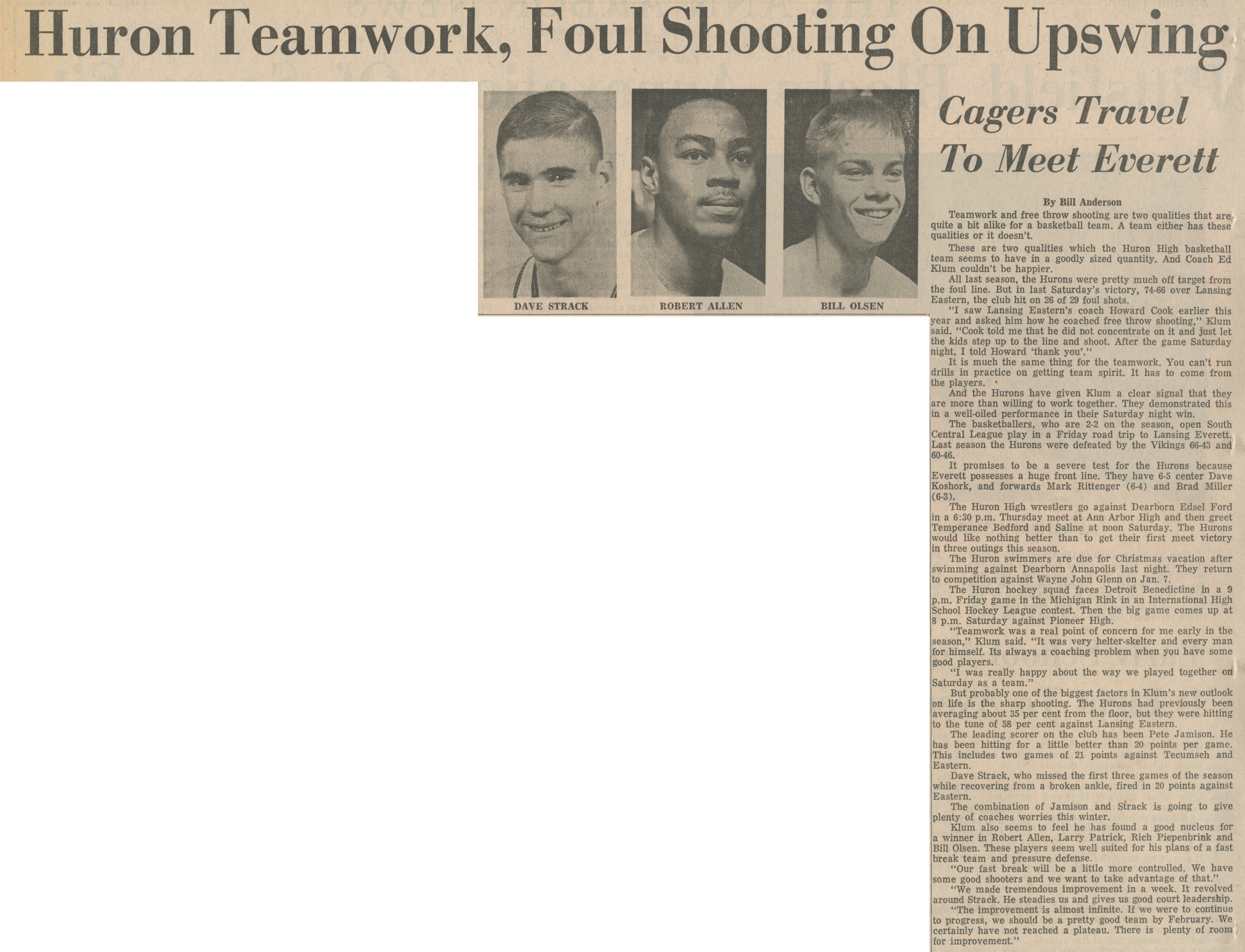 Teamwork and free throw shooting are two qualities that are, quite a bit alike for a basketball team. A team either has these qualities or it doesn’t.

These are two qualities which the Huron High basketball team seems to have in a goodly sized quantity. And Coach Ed Klum couldn’t be happier.

All last season, the Hurons were pretty much off target from the foul line. But in last Saturday’s victory, 74-66 over Lansing Eastern, the club hit on 26 of 29 foul shots.

“I saw Lansing Eastern’s coach Howard Cook earlier this year and asked him how he coached free throw shooting,” Klum said. “Cook told me that he did not concentrate on it and just let the kids step up to the line and shoot. After the game Saturday night, I told Howard ‘thank you’.”

It is much the same thing for the teamwork. You can’t run drills in practice on getting team spirit. It has to come from the players.

And the Hurons have given Klum a clear signal that they are more than willing to work together. They demonstrated this in a well-oiled performance in their Saturday night win.

The basketballers, who are 2-2 on the season, open South Central League play in a Friday road trip to Lansing Everett. Last season the Hurons were defeated by the Vikings 66-43 and 60-46.

It promises to be a severe test for the Hurons because Everett possesses a huge front line. They have 6-5 center Dave Koshork, and forwards Mark Rittenger (6-4) and Brad Miller (6-3).

The Huron High wrestlers go against Dearborn Edsel Ford in a 6:30 p.m. Thursday meet at Ann Arbor High and then greet Temperance Bedford and Saline at noon Saturday. The Hurons would like nothing better than to get their first meet victory in three outings this season.

The Huron swimmers are due for Christmas vacation after swimming against Dearborn Annapolis last night. They return to competition against Wayne John Glenn on Jan. 7.

The Huron hockey squad faces Detroit Benedictine in a 9 p.m. Friday game in the Michigan Rink in an International High School Hockey League contest. Then the big game comes up at 8 p.m. Saturday against Pioneer High.

“Teamwork was a real point of concern for me early in the season,” Klum said. “It was very helter-skelter and every man for himself. Its always a coaching problem when you have some good players.

“I was really happy about the way we played together on Saturday as a team.”

But probably one of the biggest factors in Klum’s new outlook on life is the sharp shooting. The Hurons had previously been averaging about 35 per cent from the floor, but they were hitting to the tune of 58 per cent against Lansing Eastern.

The leading, scorer on the club has been Pete Jamison. He has been hitting for a little better than 20 points per game. This includes two games of 21 points against Tecumseh and Eastern.

Dave Strack, who missed the first three games of the season while recovering from a broken ankle, fired in 20 points against Eastern.

The Combination of Jamison and Strack is going to give plenty of coaches worries this winter.

Klum also seems to feel he has found a good nucleus for a winner in Robert Allen, Larry Patrick, Rich Piepenbrink and Bill Olsen. These players seem well suited for his plans of a fast break team and pressure defense.

“Our fast break will be a little more controlled. We have some good shooters and we want to take advantage of that.”

“We made tremendous improvement in a week. It revolved around Strack. He steadies us and gives us good court leadership.

“The improvement is almost infinite. If we were to continue to progress, we should be a pretty good team by February. We certainly have not reached a plateau. There is plenty of room for improvement.”