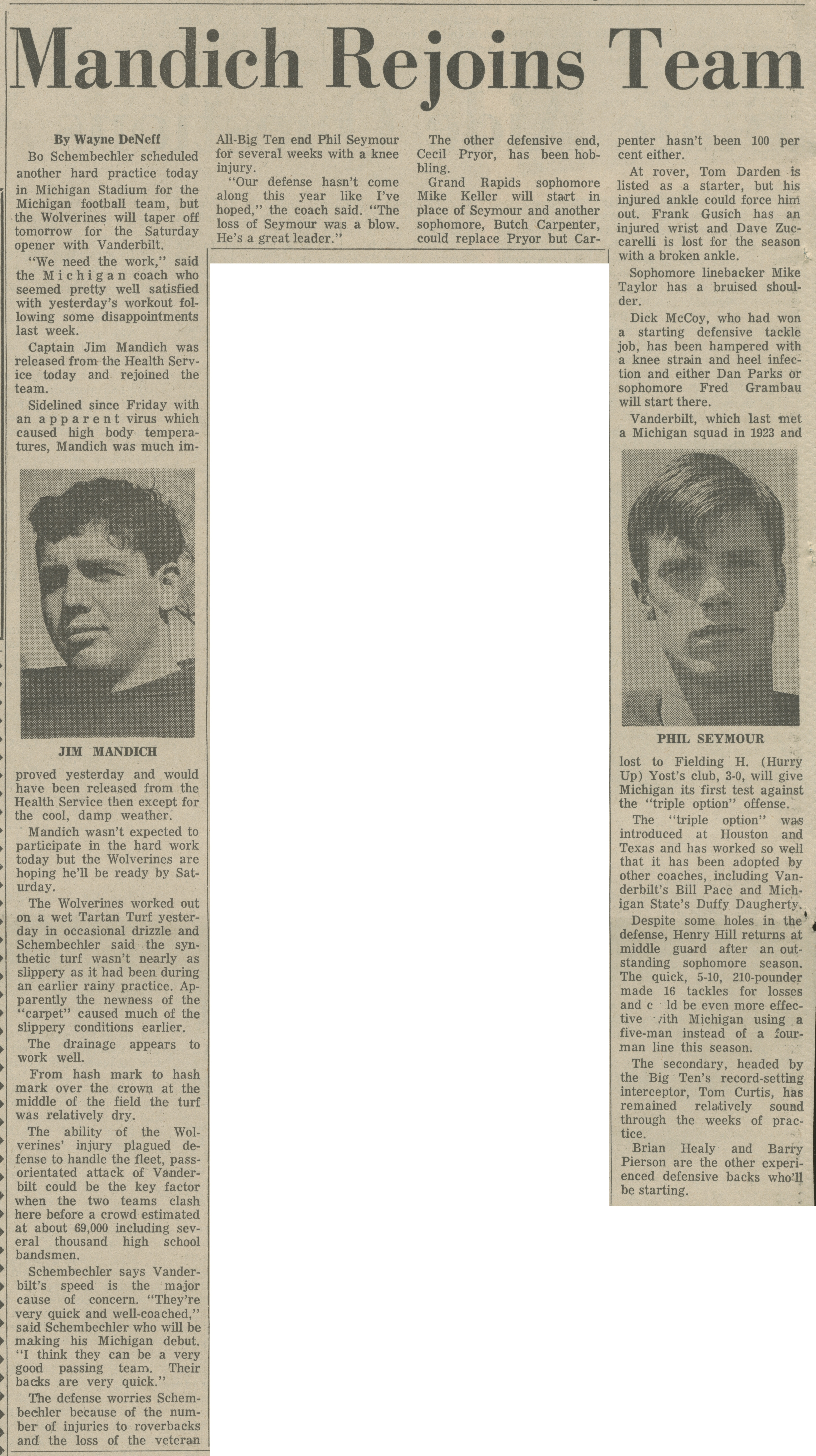 Bo Schembechler scheduled another hard practice today in Michigan Stadium for the Michigan football team, but the Wolverines will taper off tomorrow for the Saturday opener with Vanderbilt.

Captain Jim Mandich was released from the Health Service today and rejoined the team.

Sidelined since Friday with an apparenty virus which caused high body temperatures, Mandich was much improved yesterday and would have been released from the Health Service then except for the cool, damp weather.

Mandich wasn’t expected to participate in the hard work today but the Wolverines are hoping he’ll be ready Saturday.

The Wolverines worked out on a wet Tartan Turf yesterday in occasional drizzle and Schembechler said the synthetic turf wasn’t nearly as slippery as it had been during an earlier rainy practice. Apparently the newness of the “carpet” caused much of the slippery conditions earier.

The drainage appears to work well.

From hash mark to hash mark over the crown at the middle of the field the turf was relatively dry.

The ability of the Wolverines’ injury plagued defense to handle the fleet, pass-oriented attack of Vanderbilt could be the key factor when the two teams clash here before a crowd estimated at about 69,000 including several thousand high school bandsmen.

Schembechler says Vanderbilt’s speed is the major cause of concern. “They’re very quick and well-coached,” said Schembechler who will be making his Michigan debut. “I think they can be a very good passing team. Their backs are very quick.”

The defense worries Schembechler because of the number of injuries to roverbacks and the loss of the veteran All-Big Ten end Phil Seymour for several weeks with a knee injury.

“Our defense hasn’t come along this year like I’ve hoped,” the coach said. “The loss of Seymour was a blow. He’s a great leader.”

The other defensive end, Cecil Pryor, has been hobbling.

Grand Rapids sophomore Mike Keller will start in place of Seymour and another sophomore, Butch Carpenter, could replace Pryor but Carpenter hasn’t been 100 percent either.

At rover, Tom Darden is listed as a starter, but his injured ankle could force him out. Frank Gusich has an injured wrist and Dave Zuccarelli is lost for the season with a broken ankle.

Dick McCoy, who had won a starting defensive tackle job, has been hampered with a knee strain and heel infection and either Dan Parks or sophomore Fred Grambau will start there.

Vanderbilt, which last met a Michigan squad in 1923 and lost to Fielding H. (Hurry Up) Yost’s club, 3-0, will give Michigan its first test against the “triple option” offense.

The “triple option” was introduced at Houston and Texas and has worked so well that it has been adopted by other coaches, including Vanderbilt’s Bill Pace and Michigan State’s Duffy Daugherty.

Despite some holes in the defense, Henry Hill returns at middle guard after an outstanding sophomore season. The quick 5-10, 210-pounder made 16 tackles for losses and could be even more effective with Michigan using a five-man instead of a four-man line this season.

The secondary, headed by the Big Ten’s record-setting interceptor, Tom Curtis, has remained relatively sound through the weeks of practice.

Brian Healy and Barry Pierson are the other experienced defensive backs who’ll be starting.