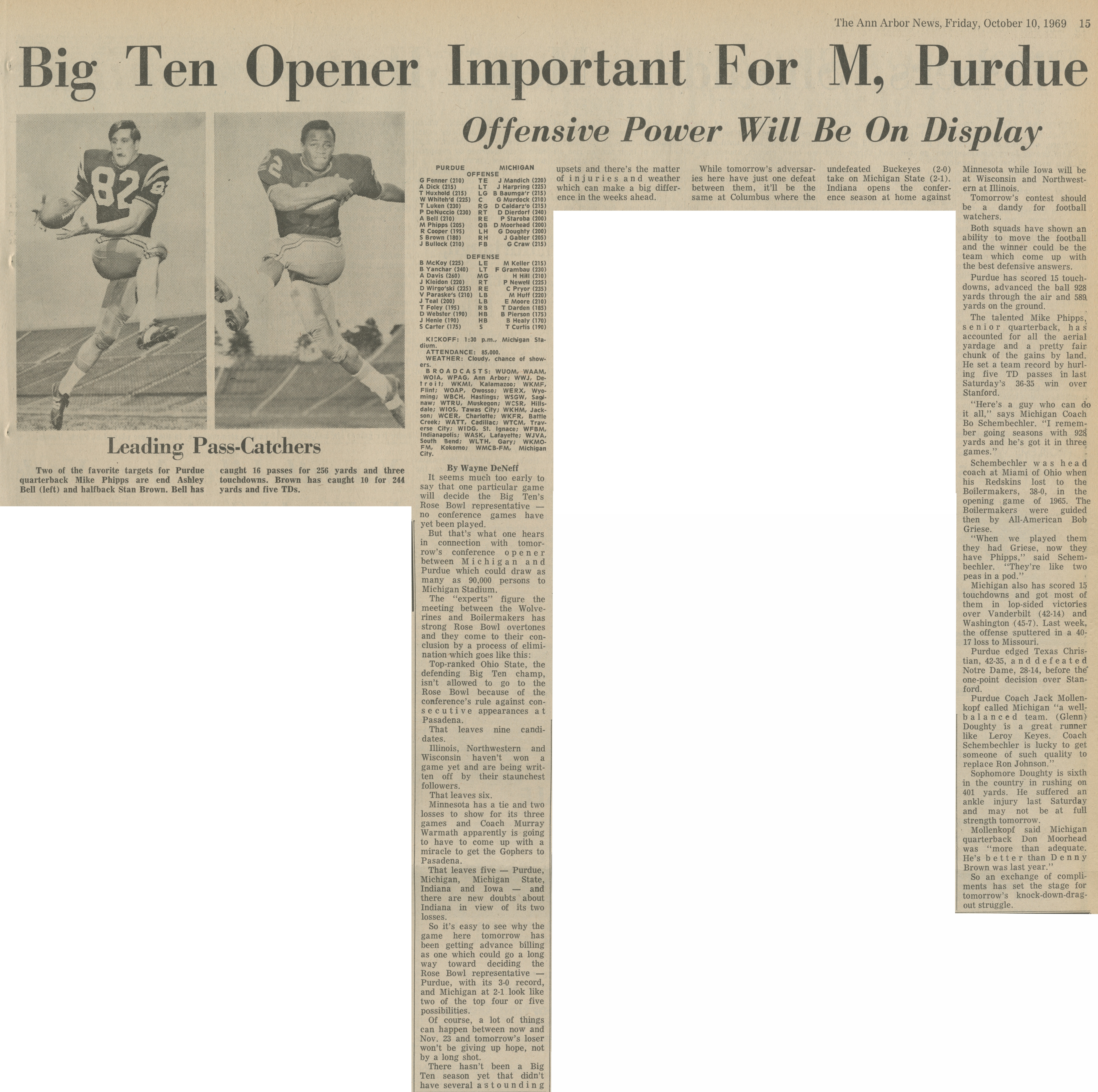 BIG TEN OPENER IMPORTANT FOR M, PURDUE
OFFENSIVE POWER WILL BE ON DISPLAY
By Wayne DeNeff

It seems much too early to say that one particular game will decide the Big Ten’s Rose Bowl representative—no conference games have yet been played.
But that’s what one hears in connection with tomorrow’s conference opener between Michigan and Purdue which could draw as many as 90,000 persons to Michigan Stadium.
The “experts” figure the meeting between the Wolverines and Boilermakers has strong Rose Bowl overtones and they come to their conclusion by a process of elimination which goes like this:
Top-ranked Ohio State, the defending Big Ten champ, isn’t allowed to go to the Rose Bowl because of the conference rule against consecutive appearances at Pasadena.
That leaves nine candidates.
Illinois, Northwestern and Wisconsin haven’t won a game yet and are being written off by their staunchest followers.
That leaves six.
Minnesota has a tie and two losses to show for its three games and Coach Murray Warmath apparently is going to have to come up with a miracle to get the Gophers to Pasadena.
That leaves five—Purdue, Michigan, Michigan State, Indiana and Iowa—and there are new doubts about Indiana in view of its two losses.
So it’s easy to see why the game here tomorrow has been getting advance billing as one which could go a long way toward deciding the Rose Bowl representative—Purdue, with its 3-0 record, and Michigan at 2-1 look like two of the top four or five possibilities.
Of course, a lot of things can happen between now and Nov. 23 and tomorrow’s loser won’t be giving up hope, not by a long shot.
There hasn’t been a Big Ten season yet that didn’t have several astounding upsets and there’s the matter of injuries and weather which can make a big difference in the weeks ahead.
While tomorrow’s adversaries here have just one defeat between them, it’ll be the same at Columbus where the undefeated Buckeyes (2-0) take on Michigan State (2-1). Indiana opens the conference season at home against Minnesota while Iowa will be at Wisconsin and Northwestern at Illinois.
Tomorrow’s contest should be a dandy for football watchers.
Both squads have shown an ability to move the football and the winner could be the team which come up with the best defensive answers.
Purdue has scored 15 touchdowns, advanced the ball 928 yards through the air and 589 yards on the ground.
The talented Mike Phipps, senior quarterback, has accounted for all the aerial yardage and a pretty fair chunk of the gains by land. He set a team record by hurling five TD passes in last Saturday’s 36-35 win over Stanford.
“Here’s a guy who can do it all,” says Michigan Coach Bo Schembechler. “I remember going seasons with 928 yards and he’s got it in three games.”
Schembechler was head coach at Miami of Ohio when his Redskins lost to the Boilermakers, 38-0, in the opening game of 1965. The Boilermakers were guided then by All-American Bob Griese.
“When we played them they had Griese, now they have Phipps,” said Schembechler. “They’re like two peas in a pod.”
Michigan also has scored 15 touchdowns and got most of them in lop-sided victories over Vanderbilt (42-14) and Washington (45-7). Last week, the offense sputtered in a 40-17 loss to Missouri.
Purdue edged Texas Christian, 42-35, and defeated Notre Dame, 28-14, before the one-point decision over Stanford.
Purdue Coach Jack Mollenkopf called Michigan “a well-balanced team. (Glenn) Doughty is a great runner like Leroy Keyes. Coach Schembechler is lucky to get someone of such quality to replace Ron Johnson.”
Sophomore Doughty is sixth in the country in rushing on 401 yards. He suffered an ankle injury last Saturday and may not be at full strength tomorrow.
Mollenkopf said Michigan quarterback Don Moorhead was “more than adequate. He’s better than Denny Brown was last year.”
So an exchange of compliments has set the stage for tomorrow’s knock-down-drag-out struggle.