Bishop Is Found Innocent On The Basis Of Insanity 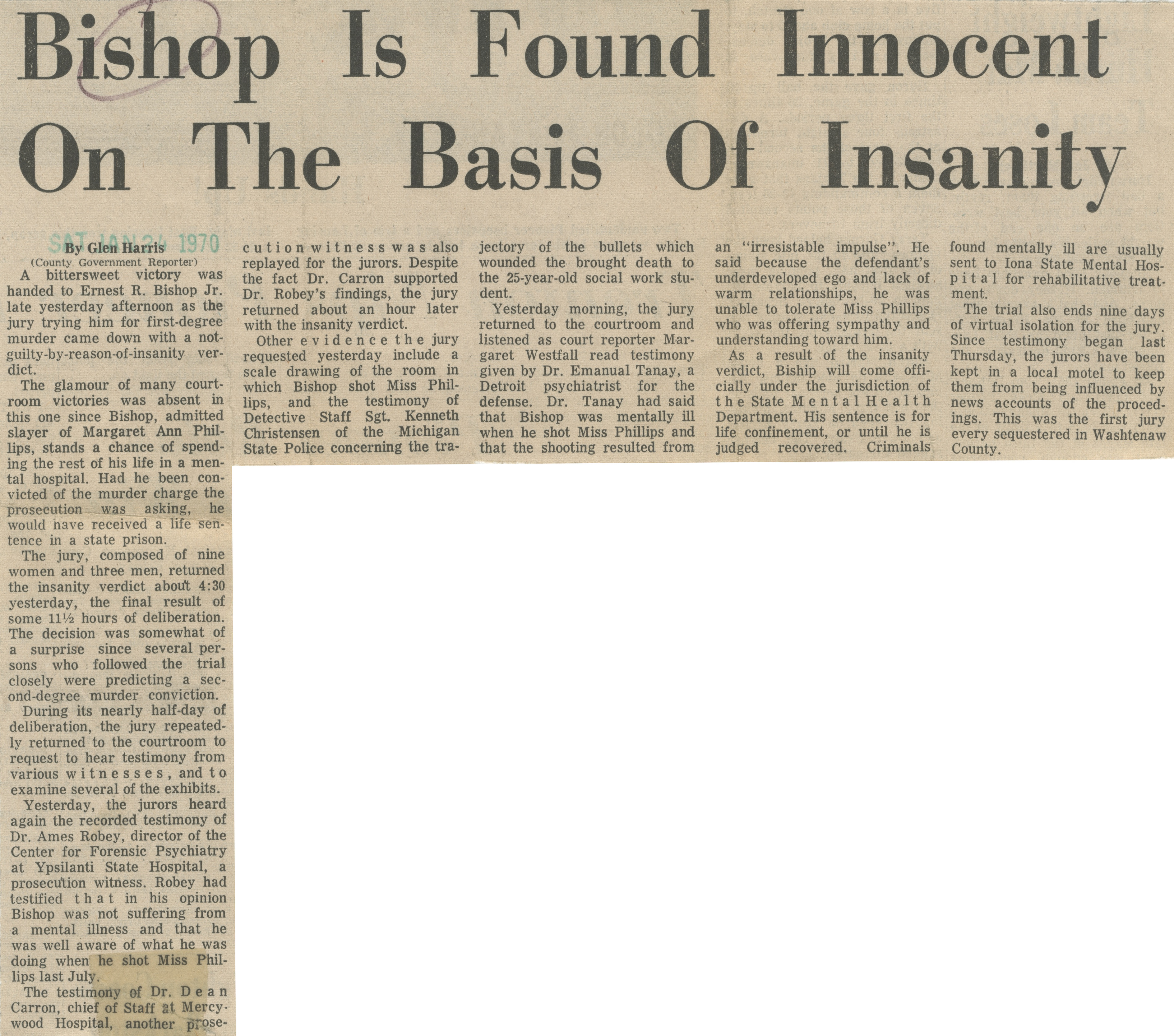 ﻿Bjshdp Is Found Innocent On The Basis Of Insanity

A bittersweet victory was handed to Ernest R. Bishop Jr. late yesterday afternoon as the jury trying him for first-degree murder came down with a not-guilty-by-reason-of-insanity verdict.

The glamour of many courtroom victories was absent in this one since Bishop, admitted slayer of Margaret Ann Phillips, stands a chance of spending the rest of his life in a mental hospital. Had he been convicted of the murder charge the prosecution was asking, he would have received a life sentence in a state prison.

The jury, composed of nine women and three men, returned the insanity verdict about 4:30 yesterday, the final result of some 11 1/2 hours of deliberation. The decision was somewhat of a surprise since several persons who followed the trial closely were predicting a second-degree murder conviction.

During its nearly half-day of deliberation, the jury repeatedly returned to the courtroom to request to hear testimony from various witnesses, and to examine several of the exhibits.

Yesterday, the jurors heard again the recorded testimony of Dr. Ames Robey, director of the Center for Forensic Psychiatry at Ypsilanti State Hospital, a prosecution witness. Robey had testified that in his opinion Bishop was not suffering from a mental illness and that he was well aware of what he was doing when he shot Miss Phillips last July.

The testimony of Dr. Dean Carron, chief of Staff at Mercy-wood Hospital, another prosecution witness was also replayed for the jurors. Despite the fact Dr. Carron supported Dr. Robey's findings, the jury returned about an hour later with the insanity verdict.

Other evidence the jury requested yesterday include a scale drawing of the room in which Bishop shot Miss Phillips, and the testimony of Detective Staff Sgt. Kenneth Christensen of the Michigan State Police concerning the trajectory of the bullets which wounded the brought death to the 25-year-old social work student.

Yesterday morning, the jury returned to the courtroom and listened as court reporter Margaret Westfall read testimony given by Dr. Emanual Tanay, a Detroit psychiatrist for the defense. Dr. Tanay had said that Bishop was mentally ill when he shot Miss Phillips and that the shooting resulted from an “irresistible impulse”. He said because the defendant’s underdeveloped ego and lack of warm relationships, he was unable to tolerate Miss Phillips who was offering sympathy and understanding toward him.

As a result of the insanity verdict, Bishop will come officially under the jurisdiction of the State Mental Health Department. His sentence is for life confinement, or until he is judged recovered. Criminals found mentally ill are usually sent to Iona State Mental Hospital for rehabilitative treatment.

The trial also ends nine days of virtual isolation for the jury. Since testimony began last Thursday, the jurors have been kept in a local motel to keep them from being influenced by news accounts of the proceedings. This was the first jury every sequestered in Washtenaw County.