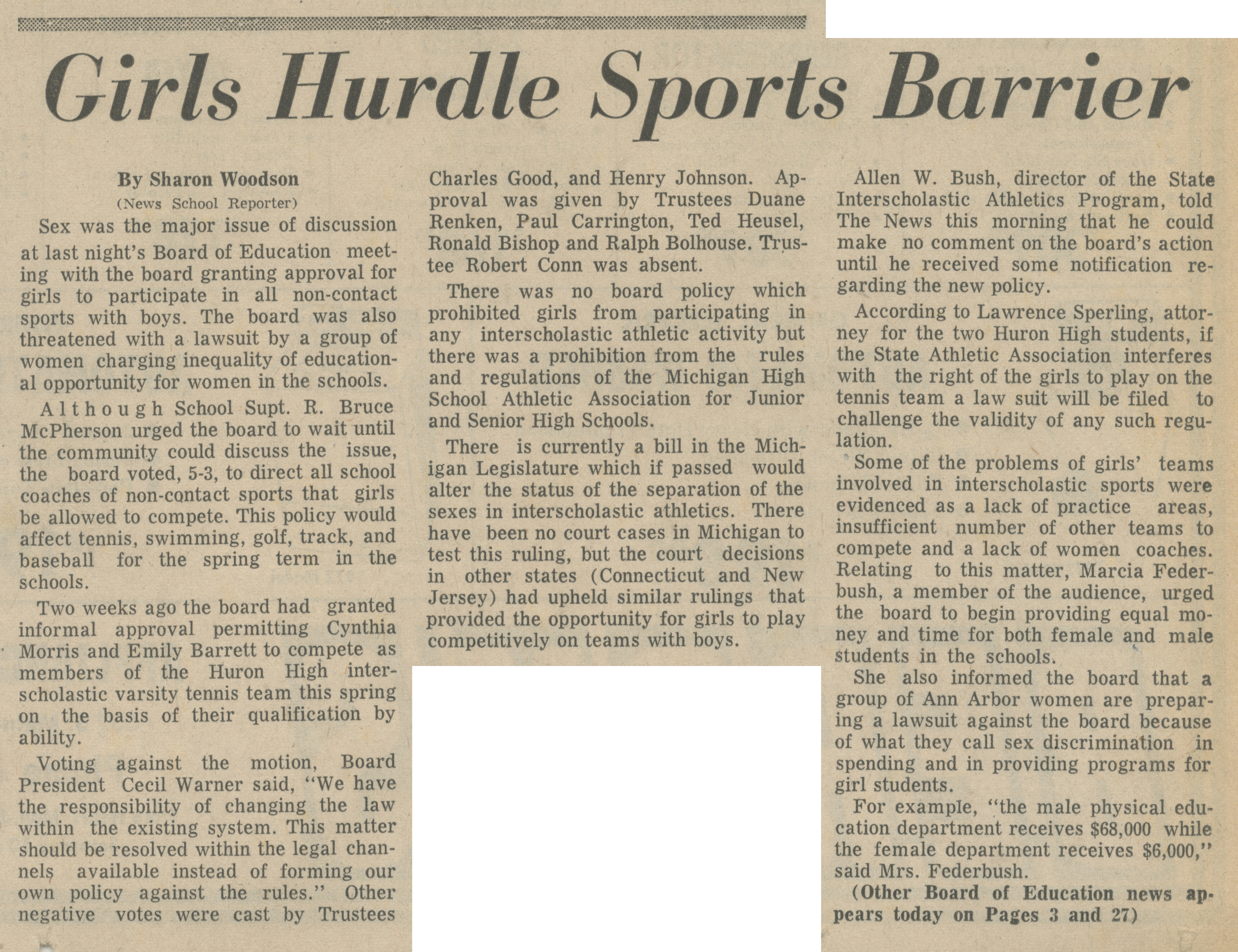 Sex was the major issue of discussion at last night's Board of Education meeting with the board granting approval for girls to particípate in all non-contact sports with boys. The board was also threatened with a lawsuit by'a group of women charging inequality of educational opportunity for women in the schools. A 1 1 h o u g h School Supt. R. Bruce McPherson urged the board to wait until the community could discuss the issue, the board voted, 5-3, to direct all school coaches of non-contact sports that girls be allowed to compete. This policy would affect tennis, swimming, golf, track, and I baseball for the spring term in the schools. I Two weeks ago the board had granted I informal approval permitting Cynthia I Morris and Emily Barrett to compete as I members of the Huron High interI scholastic varsity tennis team this spring I on the basis of their qualification by I ability. Voting against the motion, Board I President Cecil Warner said, "We have I the responsibility of changing the law I within the existing system. This matter I should be resolved within the legal chanI neis available instead of forming our own policy against the "rules." Other I negative votes were cast by Trustees Charles Good, and Henry Johnson. Approval was given by Trustees Duane Renken, Paul Carrington, Ted Heusel, Ronald Bishop and Ralph Bolhouse. Trustee Robert Conn was absent. There was no board policy which prohibited girls from participating in any interscholastic athletic activity but there was a prohibition from the rules and regulations of the Michigan High School Athletic Association for Junior and Senior High Schools. There is currently a bilí in the Michigan Legislature which if passed would alter the status of the separation of the sexes in interscholastic athletics. There have been no court cases in Michigan to test this ruling, but the court decisions . in other states (Connecticut and New Jersey) had upheld similar rulings that provided the opportunity for girls to play competitively on teams with boys. Alien W. Bush, director of the State Interscholastic Athletics Program, told The News this morning that he could make no comment on the board's action until he received some notification regarding the new policy. According to Lawrence Sperling, attorney for the two Hurón High students, if the State Athletic Association interferes with the right of the girls to play on the tennis team a law suit will be filed to challenge the validity of any such regulation. Some of the problems of girls' teams involved in interscholastic sports were evidenced as a lack of practice áreas, insufficient number of other teams to compete and a lack of women coaches. Relating to this matter, Marcia Federbush, a member of the audience, ürged the board to begin providing equal money and time for both female and male students in the schools, She also informed the board that a , group of Ann.Arbor women are preparing a lawsuit against the board because I of what they cali sex discrimination in I i spending and in providing programs for I girl students. For example, "the male physical edu-l catión department receives $68,000 whilel the female department receives $6,000, "I said Mrs. Federbush. I