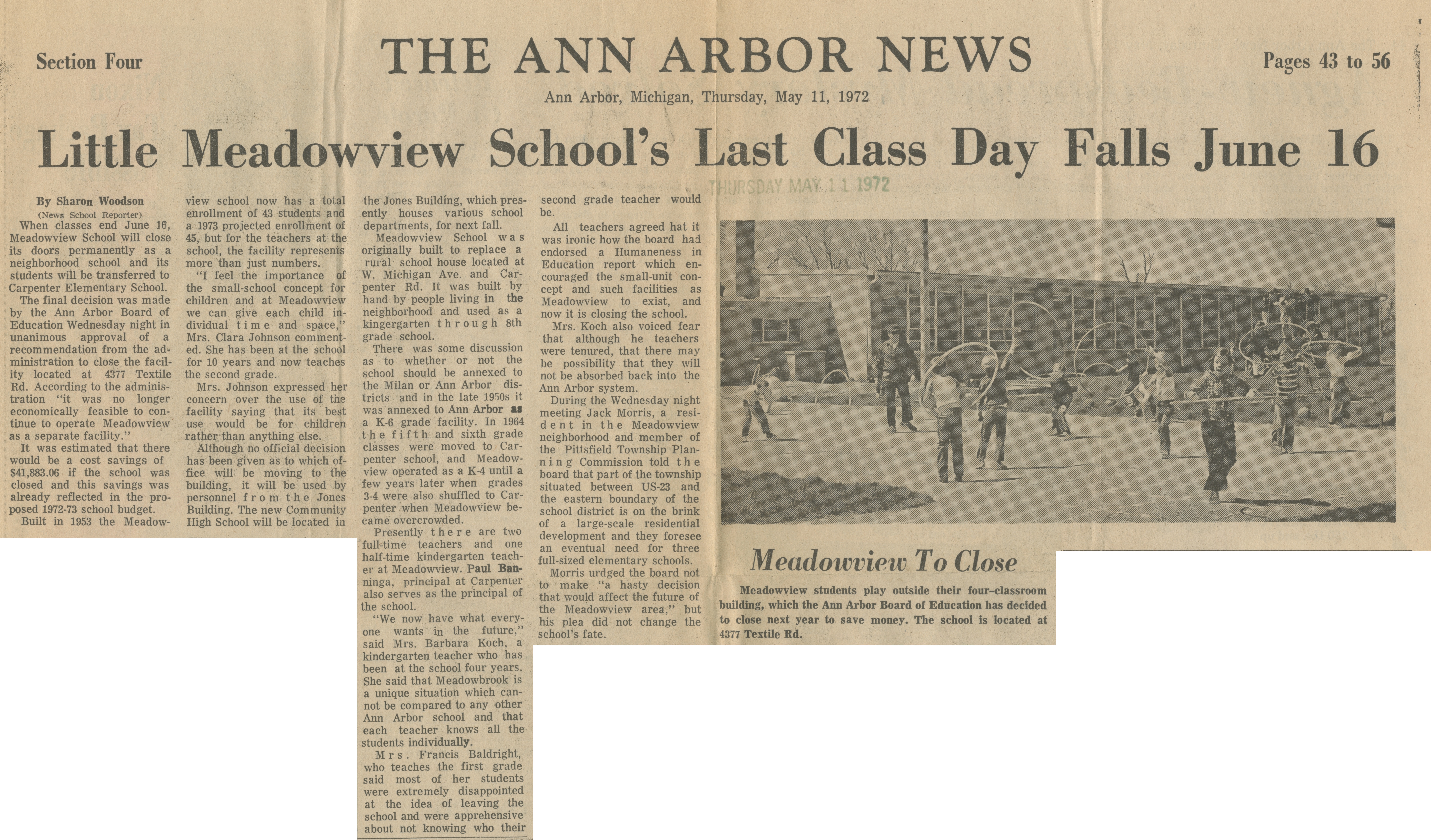 When classes end June 16, Meadowview School will close its doors permanently as a neighborhood school and its students will be transferred to Carpenter Elementary School. The final decision was made by the Ann Arbor Board of Education Wednesday night in unanimous approval of a recommendation from the administration to close the facilIity located at 4377 Textile Rd. According to the administration "it was no longer economically feasible to continue to operate Meadowview as a separate facility." It was estimated that there would be a cost savings of $41,883.06 if the school was closed and this savings was already reflected in the proposed 1972-73 school budget. Built in 1953 the Meadowview school now has a total enrollment of 43 students and a 1973 projected enrollment of 45, but for the teachers, at the school, the facility represents more than just numbers. "I feel the importance of the small-school concept for children and at Meadowview we can give each child individual time and space," Mrs. Clara Johnson commented. She has been at the school for 10 years and now teaches the second grade. Mrs. Johnson expressed her concern over the use of the facility saying that its best use would be for children rather than anything else. Although no official decision has been given as to which , office will be moving to the building, it will be used by personnel from the Jones Building. The new Community High School will be located in the Jones Building, which presently houses various school departments, for next fall. Meadowview School was originally built to replace a rural school house located at W. Michigan Ave. and Carpenter Rd. It was built by hand by people living in the neighborhood and used as a kingergarten through 8th grade school. There was some discussion as to whether or not the school should be annexed to the Milan or Ann Arbor districts and in the late 1950s it was annexed to Ann Arbor as a K-6 grade facility. In 1964 the fifth and sixth grade classes were moved to Carpenter school, and Meadowview operated as a K-4 until a few years later when grades 3-4 were also shuffled to Carpenter when Meadowview became overcrowded. Presently there are two full-time teachers and one half-time kindergarten teacher at Meadowview. Paul Banninga, principal at Carpenter also serves as the principal of the school. "We now have what everyone wants in the future," said Mrs. Barbara Koch, a kindergarten teacher who has been at the school four years. She said that Meadowbrook is a unique situation which cannot be compared to any other Ann Arbor school and that each teacher knows all the students individually. Mrs. Francis Baldright, who teaches the first grade said most her students were extremely disappointed at the idea of leaving the school and were apprehensive about not knowing who their second grade teacher would be. All teachers agreed hat it was ironic how the board had endorsed a Humaneness in Education report which encouraged the small-unit concept and such facilities as Meadowview to exist, and now it is closing the school. Mrs. Koch also voiced fear that although he teachers were tenured, that there may be possibility that they will not be absorbed back into the Ann Arbor system. During the Wednesday night meeting Jack Morris, a resident in the Meadowview neighborhood and member of the Pittsfield Townshíp  ning Commission told the board that part of the township situated between US-23 and I the eastern boundary of the school district is on the brink of a large-scale residential development and they foresee an eventual need for three full-sized elementary schools. Morris urged the board not to make "a hasty decisión that would affect the future of the Meadowview area," but his plea did not change the school's fate.