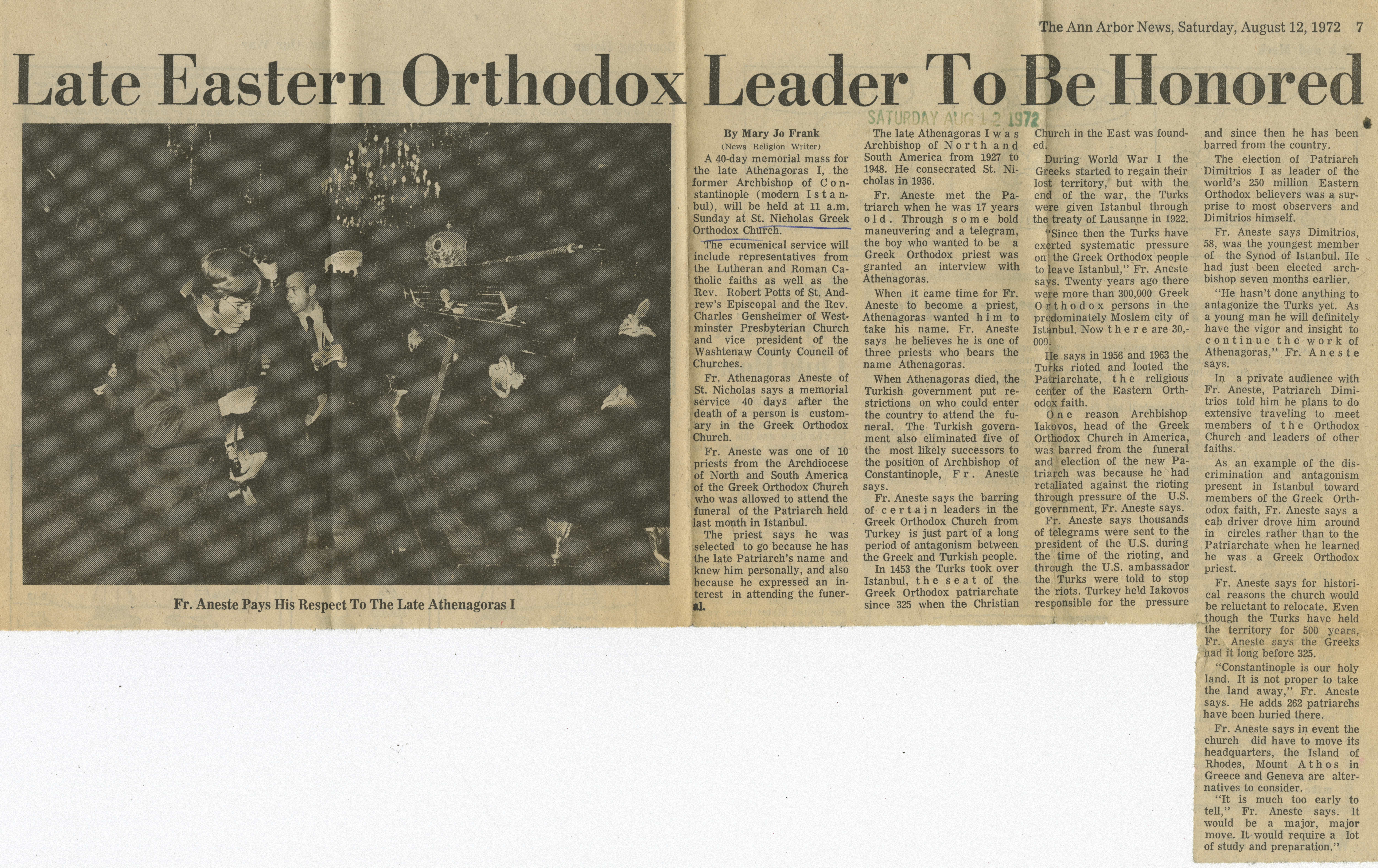 A 40-day memorial mass for the late Athenagoras I, the former Archbishop of Constantinople (modern Istanbul), will be held at 11 a.m. Sunday at St. Nicholas Greek Orthodox Church.

The ecumenical service will include representatives from the Lutheran and Roman Catholic faiths as well as the Rev. Robert Potts of St. Andrew’s Episcopal and the Rev. Charles Gensheimer of Westminster Presbyterian Church and vice president of the Washtenaw County Council of Churches.

Fr. Athenagoras Aneste of St. Nicholas says a memorial service 40 days after the death of a person is customary in the Greek Orthodox Church.

Fr. Aneste was one of 10 priests from the Archdiocese of North and South America of the Greek Orthodox Church who was allowed to attend the funeral of the Patriarch held last month in Istanbul.

The priest says he was selected to go because he has the late Patriarch’s name and knew him personally, and also because he expressed an interest in attending the funeral.

The late Athenagoras I was Archbishop of North and South America from 1927 to 1948. He consecrated St. Nicholas in 1936.

Fr. Aneste met the Patriarch when he was 17 years old. Through some bold maneuvering and a telegram, the boy who wanted to be a Greek Orthodox priest was granted an interview with Athenagoras.

When it came time for Fr. Aneste to become a priest, Athenagoras wanted him to take his name. Fr. Aneste says he believes he is one of three priests who bears the name Athenagoras.

Fr. Aneste says the barring of certain leaders in the Greek Orthodox Church from Turkey is just part of a long period of antagonism between the Greek and Turkish people.

In 1453 the Turks took over Istanbul, the seat of the Greek Orthodox patriarchate since 325 when the Christian Church in the East was founded.

During World War I the Greeks started to regain their lost territory, but with the end of the war, the Turks were given Istanbul through the treaty of Lausanne in 1922.

“Since then the Turks have exerted systematic pressure on the Greek Orthodox people to leave Istanbul,” Fr. Aneste says. Twenty years ago there were more than 300,000 Greek Orthodox persons in the predominately Moslem city of Istanbul. Now t h e r e are 30,000.

He says in 1956 and 1963 the Turks rioted and looted the Patriarchate, the religious center of the Eastern Orthodox faith.

One reason Archbishop Iakovos, head of the Greek Orthodox Church in America, was barred from the funeral and election of the new Patriarch was because he had retaliated against the rioting through pressure of the U.S. government, Fr. Aneste says.

Fr. Aneste says thousands of telegrams were sent to the president of the U.S. during the time of the rioting, and through the U.S. ambassador the Turks were told to stop the riots. Turkey held Iakovos responsible for the pressure and since then he has been barred from the country.

The election of Patriarch Dimitrios I as leader of the world’s 250 million Eastern Orthodox believers was a surprise to most observers and Dimitrios himself.

Fr. Aneste says Dimitrios, 58, was the youngest member of the Synod of Istanbul. He had just been elected archbishop seven months earlier.

“He hasn’t done anything to antagonize the Turks yet. As a young man he will definitely have the vigor and insight to continue the work of Athenagoras,” Fr. Aneste says.

In a private audience with Fr. Aneste, Patriarch Dimitrios told him he plans to do extensive traveling to meet members of the Orthodox Church and leaders of other faiths.

As an example of the discrimination and antagonism present in Istanbul toward members of the Greek Orthodox faith, Fr. Aneste says a cab driver drove him around in circles rather than to the Patriarchate when he learned he was a Greek Orthodox priest.

Fr. Aneste says for historical reasons the church would be reluctant to relocate. Even though the Turks have held the territory for 500 years, Fr. Aneste says the Greeks had it long before 325.

“Constantinople is our holy land. It is not proper to take the land away,” Fr. Aneste says. He adds 262 patriarchs have been buried there.

Fr. Aneste says in event the church did have to move its headquarters, the Island of Rhodes, Mount Athos in Greece and Geneva are alternatives to consider.

“It is much too early to tell,” Fr. Aneste says. It would be a major, major move. It would require a lot of study and preparation.”

Fr. Aneste Pays His Respect To The Late Athenagoras I