Struggles Turn Into Rewards For BEDL 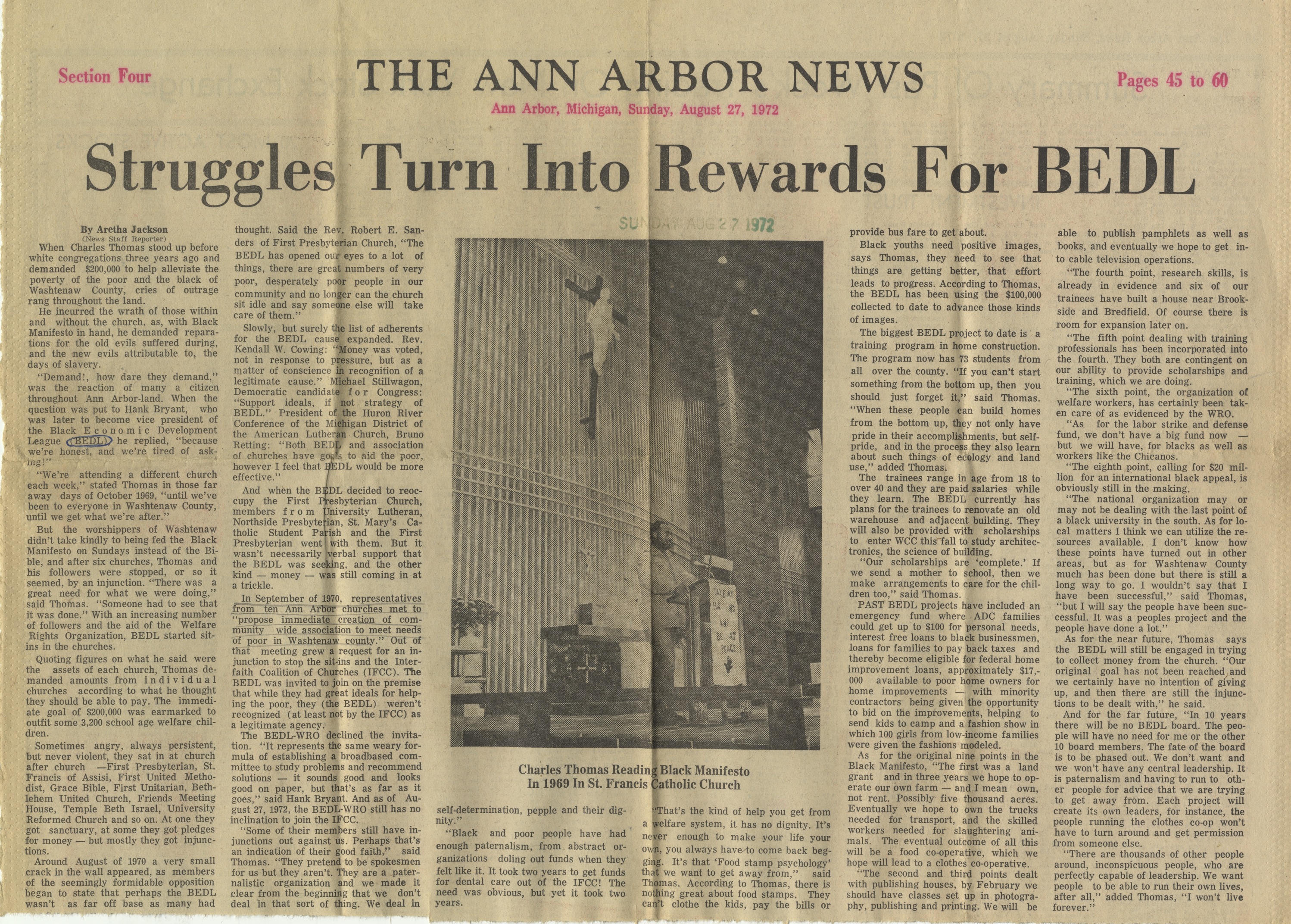 Struggles Turn Into Rewards For BEDL

When Charles Thomas stood up before white congregations three years ago and demanded $200,000 to help alleviate the poverty of the poor and the black of Washtenaw County, cries of outrage rang throughout the land.

He incurred the wrath of those within and without the church, as, with Black Manifesto in hand, he demanded reparations for the old evils suffered during, and the new evils atttributable to, the days of slaver.

"Demand!, how dare they demand," was the reaction of many a citizen throughout Ann Arbor-land. When the question was put to Hank Bryant, who was later to become vice president of the Black Economic Development League (BEDL), he replied, "because we're honest, and we're tired of asking!"

"We're attending a different church each week," stated Thomas in those far away days of October 1969, "until we've been to everyone in Washtenaw County, until we get what we're after."

But the worshippers of Washtenaw didn't take kindly to being fed the Black Manifesto on Sundays instead of the Bible, and after six churches, Thomas and his followers were stopped, or so it seemed, by an injunction. "There was a great need for what we were doing," said Thomas. "Someone had to see that it was done." With an increasing number of followers and the aid of the Welfare Rights Organization, BEDL started sit-ins in the churches.

Quoting figures on what he said were the assets of each church, Thomas demanded amounts from individual churches according to what he thought they should be able to pay. The immediate goal of $200,000 was earmarked to outfit some 3,200 school age welfare children.

Sometimes angry, always persistent, but never violent, they sat in at church after church--First Presbyterian, St. Francis of Assisi, First United Methodist, Grace Bible, First Unitarian, Bethlehem United Church, Friends Meeting House, Temple Beth Israel, University Reformed Church and so on. At one they got sanctuary, at some they got pledges for money--byt mostly they got injunctions

Around August of 1970 a very small crack in the wall appeared, as members of the seemingly formidable opposition began to state that perhaps the BEDL wasn't as far off base as many had thought. Said the Rev. Robert E. Sanders of First Presbyterian Church, "The BEDL has opened out eyes to a lot of things, there are great numbers of very poor, desperately poor people in our community and no longer can the church sit idle and say someone else will take care of them."

Slowly, but surely the list of adherents for the BEDL cause expanded. Rev. Kendal W. Cowing: "Money was voted, not in response to pressure, but as a matter of conscience in recognition of a legitimate cause." Michael Stillwagon, Democratic candidate for Congress: "Support ideals, if not strategy of BEDL." President of the Huron River Conference of the Michigan District of the American Lutheran Church, Bruno Retting: "Both BEDL and association of churches have goals to aid the poor, however I feel that BEDL would be more effective."

In September of 1970, representatives from ten Ann Arbor churches met to "propose immediate creation of community wide association to meet needs of poor in Washtenaw county.
Out of that meeting grew a request for an injunction to stop the sit-ins and the Interfaith Coalition of Churches (IFCC). The BEDL was invited to join on the premise that while they had great ideals for helping the poor, the (the BEDL) weren't recognized (at least not by the IFCC) as a legitimate agency.

The BEDL-WRO declined the invitation. "It represents the same weary formula of establishing a broadbased committee to study problems and recommend solutions--it sounds good and looks good on paper, but that's as far as it goes," said Hank Bryant. And as of August 27, 1972, the BEDL-WRO still has no inclination to join the IFCC.

"Some of their members still have injunctions out against us. Perhaps that's an indication of their good faith," said Thomas. "They pretend to be spokesmen for us, but they aren't. They are a paternalistic organization and we made it clear from the beginning that we don't deal in that sort of thing.  We deal in self-determination, pepple and their dignity."

"Black and poor people have had enough paternalism, from abstract organizations doling out funds when they felt like it. It took two years to get funds for dental care out of the IFCC! The need was obvious, but yet it took two years.

"That's the kidn of help you get from a welfare system, it has no dignity. It's never enough to make your life your own, you always have to come back begging. It's that 'Food stamp psychology' that we want to get away from," said Thomas. According to Thomas, there is nothing great about food stamps. They can't clothe the kids, pay the bills or provide bus fare to get about.

Black youths need positive images, says Thomas, they need to see that things are getting better, that effort leads to progress. According to Thomas, the BEDL has been using the $100,000 collected to date to advance those kinds of images.

The biggest BEDL project to date is a training program in home construction. The program now has 73 students from all over the county. "If you can't start something from the bottom up, then you should just forget it," said Thomas. "When these people can build homes from the bottom up, they not only have pride in their accomplishments, but self-pride, and in the process they also learn about such things of ecology and land use," added Thomas.

The trainees range in age from 18 to over 40 and they are paid salaries while they learn. The BEDL currently has plans for the trainees to renovate an old warehouse and adjacent building. They will also be provided with scholarships to enter WCC this fall to study architectronics, the science of building.

"Our scholarships are 'complete.' If we send a mother to school, then we make arrangements to care for the children too," said Thomas.

PAST BEDL projects have included an emergency fund where ADC families could get up to $100 for personal needs, interest free loans to black businessment, loans for families to pay back taxes and thereby become eligible for federal home improvement loans, approximately $17,000 available to poor home owners for home improvements--with minority contractors being given the opportunity to bid on the improvements, helping to send kids to camp and a fashion show in which 100 girls from low-income families were given the fashions modeled.

As for the original nine points in the Black Manifesto, "The first was a land grant and in three years we hope to operate our own farm--and I mean own, not rent. Possibly five thousand acres. Eventually we hope to own the trucks needed for transport, and the skilled workers needed for slaughtering animals. The eventual outcome of all this will be a food co-operative, which we hope will lead to a clothes co-operative.

"The second and third points dealt with publishing houses, by February we should have classes set up in photography, publishing and printing. We will be able to publish pamphlets as well as books, and eventually we hope to get into cable television operations.

The fourth point, research skills, is already in evidence and six of our trainees have built a house near Brookside and Bredfield. Of course there is room for expansion later on.

"The fifth point dealing with training professionals has been incorporated into the fourth.  They both are contingent on our ability to provide scholarships and training, which we are doing.

"The sixth point, the organization of welfare workers, has certainly been taken care of as evidenced by the WRO.

"As for the labor strike and defense fund, we don't have a big fund now--but we will have, for blacks as well as workers like the Chicanos.

"The eighth point, calling for $20 million, for an international black appeal, is obviously still in the making.

"The national organization may or may not be dealing with the last point of a black university in the south. As for local matters I think we can utilize the resources available. I don't know how these points have turned out in other areas, but as for Washtenaw County much has been done but there is still a long way to go. I wouldn't say that I have been successful," said Thomas, "but I will say the people have been successful. It was a peoples project and the people have done a lot."

As for the near future, Thomas says the BEDL will still be engaged in trying to collect money from the church. "Our original goal has not been reached and we certainly have no intention of giving up, and then there are still the injunctions to be dealt with," he said.

And for the far future, "In 10 years there will be no BEDL board. The people will have no need for me or the other 10 board members. The fate of the board is to be phased out. We don't want and we won't have any central leadership. It is paternalism and having to run to other people for advice that we are trying to get away from. Each project will create its own leaders, for instance, the people running the clothes co-op won't have to turn around and get permission from someone else.

"There are thousands of other people around, inconspicuous people, who are perfectly capable of leadership. We want people to be able to run their own lives, after all," added Thomas, "I won't live forever."