Jessye Norman: From U-M Student To Top Of Music World 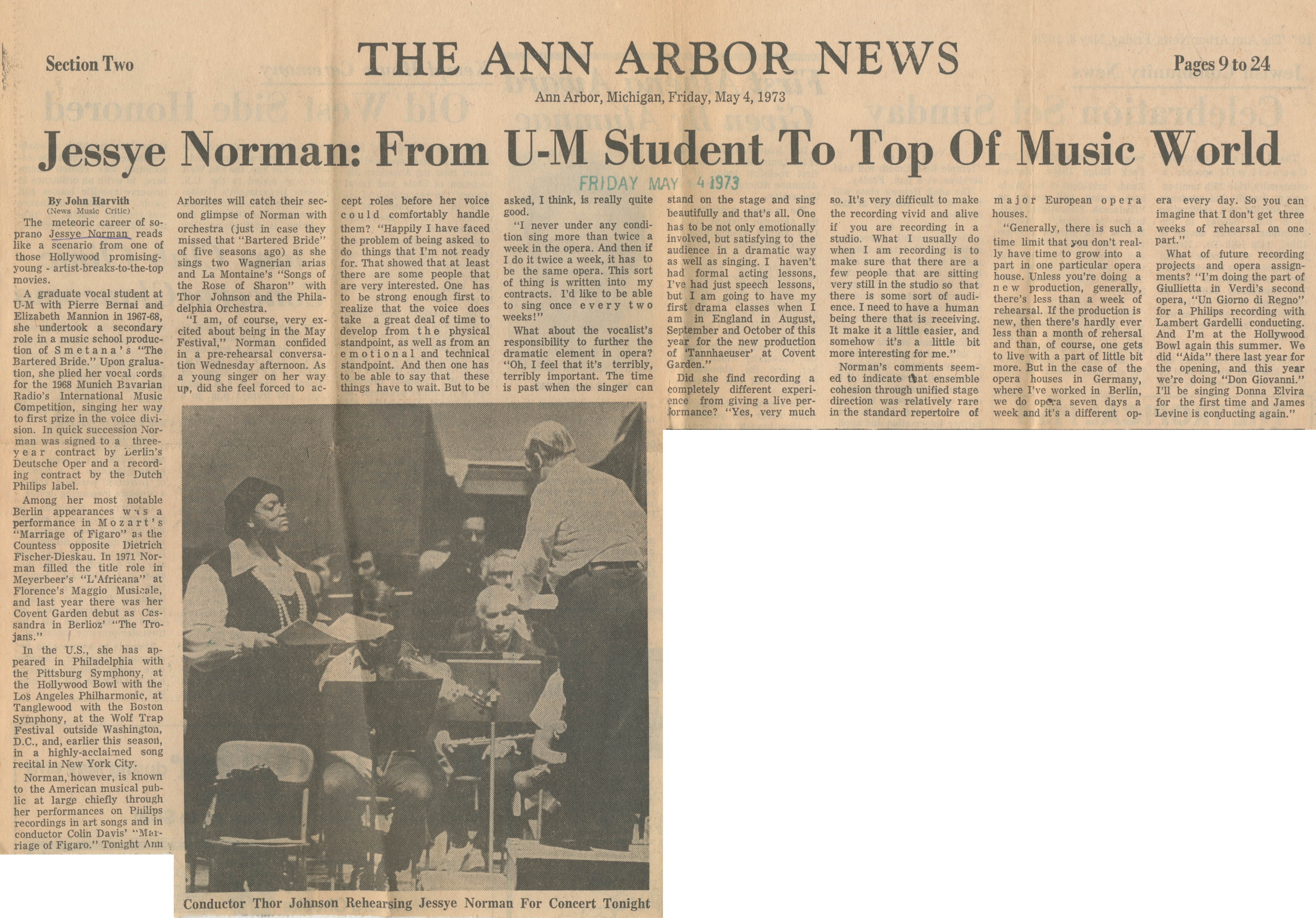 The meteoric career of soprano Jessye Norman reads like a scenario from one of those Hollywood promisingyoung - artist-breaks-to-the-top movies. A gradúate vocal student at U-M with Pierre Bernai and Elizabeth Mannion in 1967-68, she undertook a secondary role in a music school production of Smetana's "The Bartered Bride." Upon graluation, she plied her vocal ords for the 1968 Munich E a varían Radio's International Music Competition, singing her way to firstprize in the voice división. In quick succession Norman was signed to a threey e a r contract by lierlin's Deutsche Oper and a recording contract by the Dutch Philips label. Among her most notable Berlín appearances wis a performance in Mozart's "Marriage of Figaro" as the Countess opposite Dietrich Fischer-Dieskau. In 1971 Norman filled the title role in Meyerbeer's "L'Africana" at Florence's Maggio Musitóle, and last year there was her Covent Garden debut as Cassandra in Berlioz' "The Trojans." In the U.S., she has appeared in Philadelphia with the Pittsburg Symphony. at the Hollywood Bowl with the Los Angeles Philharmonic, at Tanglewood with the Boston Symphony, at the Wolf Trap Festival outside Washington, D.C., and, earlier this seasoii, in a highly-acclaimed song recital in New York City. Norman, however, is known to the American musical public at large chiefly through her performances on Piiilips recordings in art songs and in conductor Colin Davis' "Marriage of Figaro." Tonight Arm Arborites will catch M ond gMmpse of Norman with ■ orchestra (just in case they ■ missed that "Bartered Bride" ■ of five seasons ago) as she ■ sings two Wagnerian arias ■ and La Montaine's "Songs of the Rose of Sharon" with Thor Johnson and the Philadelphia Orchestra. "I am, of course, very excited about being in the May Festival," Norman confided in a pre-rehearsal conversation Wednesday afternoon. As a young singer on her way up, did she feel forced to accept roles before her voice c o u 1 d comfortably handle them? "Happily I have faced the problem of being asked to do things 'that I'm not reády for. That showed that at least there are some people that are very interested. One has to be strong enough first to realize that the voice does take a great deal of time to develop from the physical standpoint, as well as from an emotional and technical standpoint. And then one has ;o be able to say that these things have to wait. But to be asked, I think, is really quite good. "I never under any condition sing more than twice a week in the opera. And then if I do it twice a week, it has to be the same opera. This sort of thing is written into my j contracts. I'd like to be able ' to sing once every twoj weeks!" What about the vocalist' s ; responsibility to further the dramatic element in opera? i "Oh, I feel that it's terribly, I terribly important. The time 1 is past when the singer can I stand on the stage and sing I beautifully and that's all. One I has to be not only emotionally I involved, but satisfying.to the I audience in a dramatic way as well as singing. I haven't I I had formal acting lessons, I I I've had just speech lessons, but I am going to have my I I first drama classes when 1 1  am in England in August, September and October of this I I year for the new production I I of 'Tannhaeuser' at Covent Garden." Did she , find recording a I I completely different 1 I ence from giving a live perLformance? "Yes, very much so. It's very diíficult to make I the recording vivid and alive I if you are recording in a I studio. What I usually do I when I am recording is to I make sure that there are a I few people that are sitting I very still in the studio so that I there is some sort of audience. I need to have a human being there that is receiving. It make it a little easier, and I somehow it's a little bit I more interesting for me." I Norman's comments I ed to indícate tfcat ensemble I cohesión through uniñed stage I direction was relatively rare I in the standard repertoire of I major European opera 1 iouses. I "Generally, there is such a I time limit that you don't I ly have time to grow into a I part in one particular opera I house. Unless you're doing a I n e w production, generally, I there's less than a week of rehearsal. If the production is new, then there's hardly ever less than a month of rehersal and than, of course, one gets to live with a part of little bit more. But in the case of the opera houses in Germany, where I've worked in Berlin, we do opftra seven days a week and it's a different opera every day. So you can imagine that I don't get three I weeks of rehearsal on one I part." What of future recording I projects and opera assignments? "I'm doing the part of Giullietta in Verdi's second opera, "Un Giorno di Regno" for a Philips recording with Lambert Gardelli conducting. And I'm at the Hollywood Bowl again this summer. We did "Aida" there last year for the opening, and this year we're doing "Don Giovanni.' I'll be singing Donna Elvira I for the first time and James I Levine is conducting again."