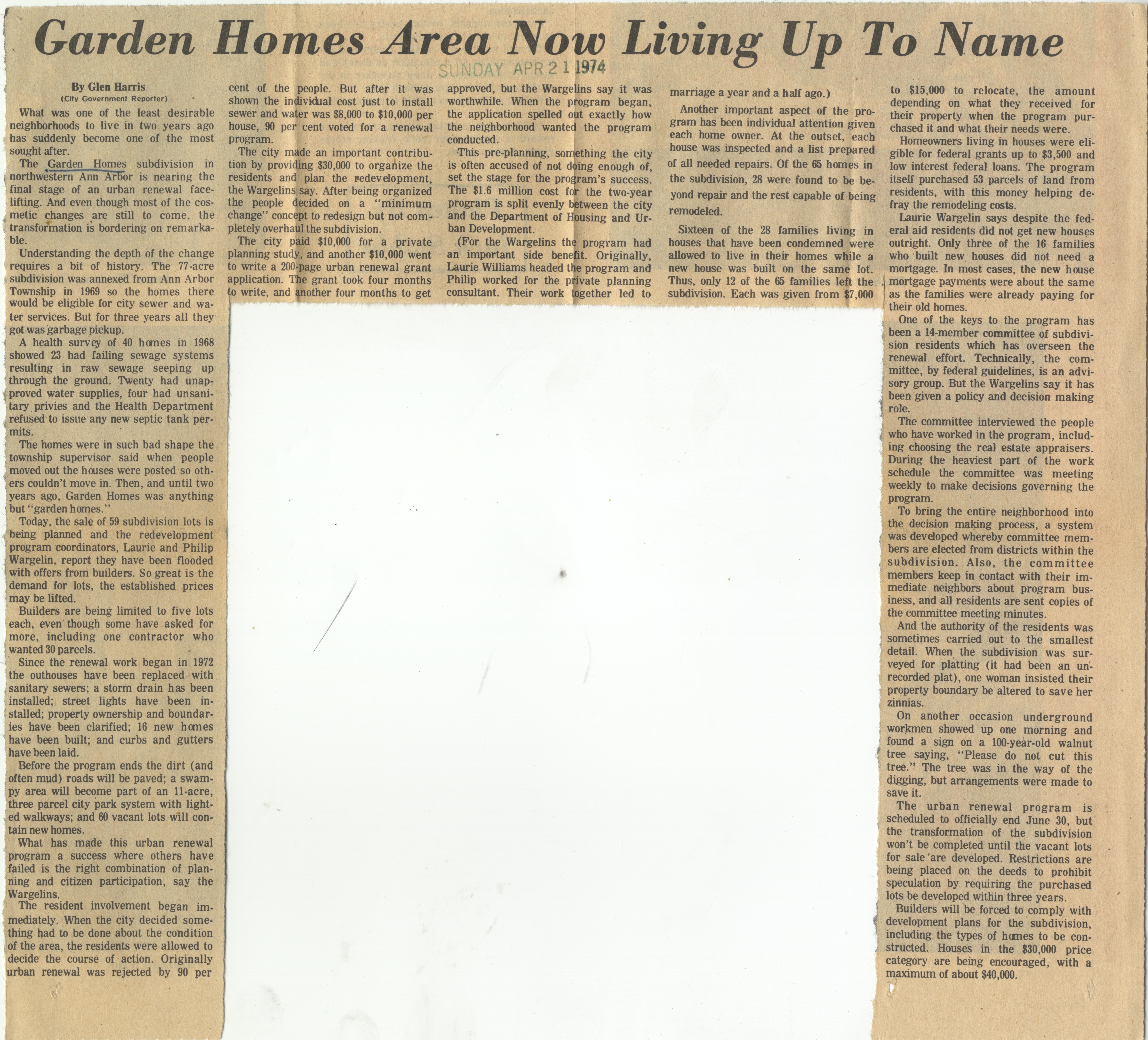 What was one of the least desirable neighborhoods to live in two years ago has suddenly become one of the most sought after.

The Garden Homes subdivision in northwestern Ann Arbor is nearing the final stage of an urban renewal face-lifting. And even though most of the cosmetic changes are still to come, the transformation is bordering on remarkable.

Understanding the depth of the change requires a bit of history. The 77-acre subdivision was annexed from Ann Arbor Township in 1969 so the homes there would be eligible for city sewer and water services. But for three years all they got was garbage pickup.

A health survey of 40 homes in 1968 showed 23 had failing sewage systems resulting in raw sewage seeping up through the ground. Twenty had unapproved water supplies, four had unsanitary privies and the Health Department refused to issue any new septic tank permits.

The homes were in such bad shape the township supervisor said when people moved out the houses were posted so others couldn’t move in. Then, and until two years ago. Garden Homes was anything but “garden homes.”

Today, the sale of 59 subdivision lots is being planned and the redevelopment program coordinators, Laurie and Philip Wargelin, report they have been flooded with offers from builders. So great is the demand for lots, the established prices may be lifted.

Builders are being limited to five lots each, even though some have asked for more, including one contractor who wanted 30 parcels.

Before the program ends the dirt (and often mud) roads will be paved; a swampy area will become part of an 11-acre, three parcel city park system with lighted walkways; and 60 vacant lots will contain new homes.

What has made this urban renewal program a success where others have failed is the right combination of planning and citizen participation, say the Wargelins.

The resident involvement began immediately. When the city decided something had to be done about the condition of the area, the residents were allowed to decide the course of action. Originally urban renewal was rejected by 90 per cent of the people. But after it was shown the individual cost just to install sewer and water was $8,000 to $10,000 per house, 90 per cent voted for a renewal program.

The city made an important contribution by providing $30,000 to organize the residents and plan the redevelopment, the Wargelins say. After being organized the people decided on a "minimum change" concept to redesign but not completely overhaul the subdivision.

This pre-planning, something the city is often accused of not doing enough of, set the stage for the program’s success. The $1.6 million cost for the two-year program is split evenly between the city and the Department of Housing and Urban Development.

(For the Wargelins the program had an important side benefit. Originally, Laurie Williams headed the program and Philip worked for the private planning consultant. Their work together led to marriage a year and a half ago.)

Another important aspect of the program has been individual attention given each home owner. At the outset, each house was inspected and a list prepared of all needed repairs. Of the 65 homes in the subdivision, 28 were found to be beyond repair and the rest capable of being remodeled.

Sixteen of the 28 families living in houses that have been condemned were allowed to live in their homes while a new house was built on the same lot. Thus, only 12 of the 65 families left the subdivision. Each was given from $7,000 to $15,000 to relocate, the amount depending on what they received for their property when the program purchased it and what their needs were.

Homeowners living in houses were eligible for federal grants up to $3,500 and low interest federal loans. The program itself purchased 53 parcels of land from residents, with this money helping defray the remodeling costs.

Laurie Wargelin says despite the federal aid residents did not get new houses outright. Only three of the 16 families who built new houses did not need a mortgage. In most cases, the new house mortgage payments were about the same as the families were already paying for their old homes.

One of the keys to the program has been a 14-member committee of subdivision residents which has overseen the renewal effort. Technically, the committee, by federal guidelines, is an advisory group. But the Wargelins say it has been given a policy and decision making role.

The committee interviewed the people who have worked in the program, including choosing the real estate appraisers. During the heaviest part of the work schedule the committee was meeting weekly to make decisions governing the program.

And the authority of the residents was sometimes carried out to the smallest detail. When the subdivision was surveyed for platting (it had been an unrecorded plat), one woman insisted their property boundary be altered to save her zinnias.

On another occasion underground workmen showed up one morning and found a sign on a 100-year-old walnut tree saying, “Please do not cut this tree.” The tree was in the way of the digging, but arrangements were made to save it.

The urban renewal program is scheduled to officially end June 30, but the transformation of the subdivision won’t be completed until the vacant lots for sale are developed. Restrictions are being placed on the deeds to prohibit speculation by requiring the purchased lots be developed within three years.

Builders will be forced to comply with development plans for the subdivision, including the types of homes to be constructed. Houses in the $30,000 price category are being encouraged, with a maximum of about $40,000.