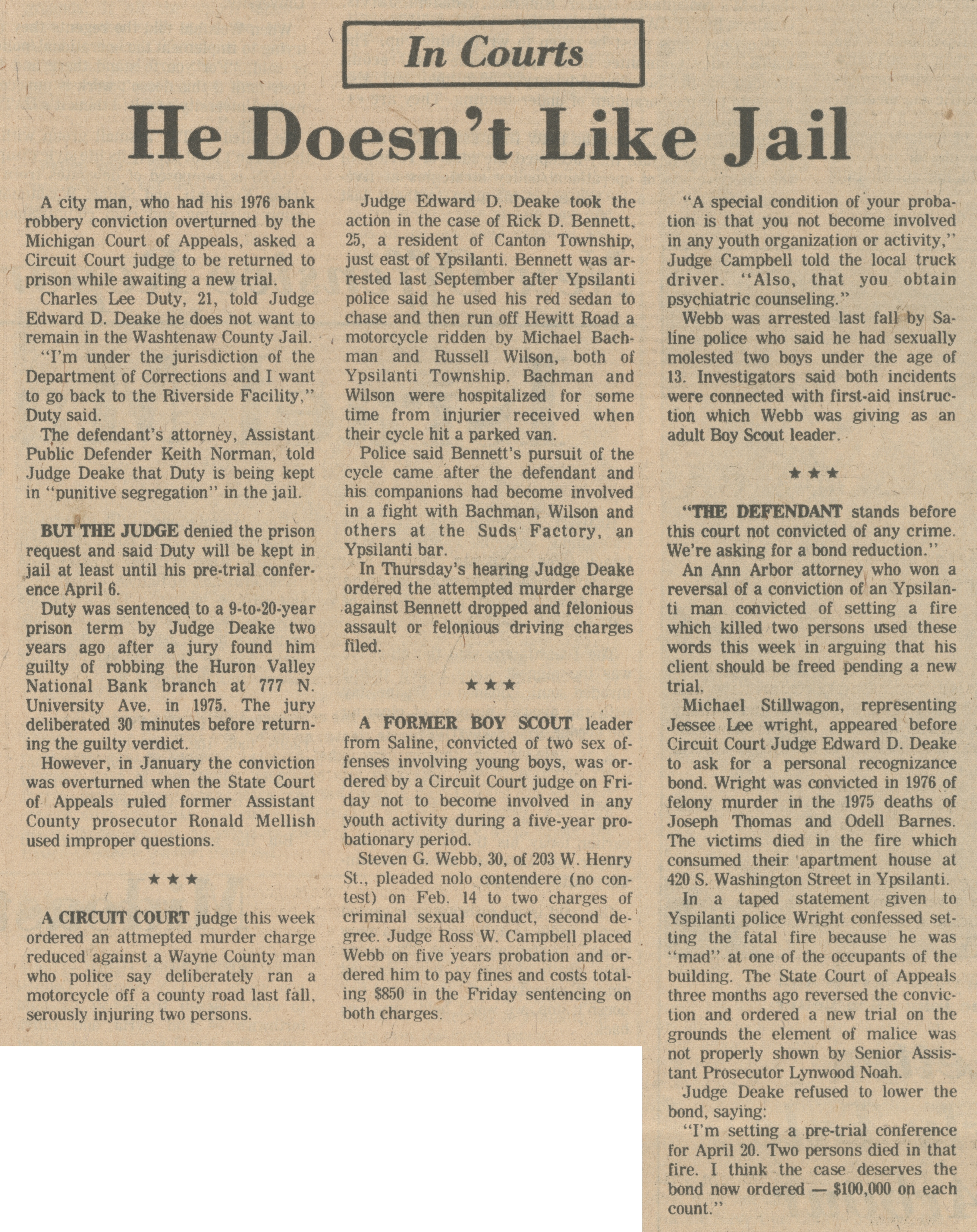 A city man, who had his 1976 bank robbery conviction overturned by the Michigan Court of Appeals, asked a Circuit Court judge to be returned to prison while awaiting a new trial.

Charles Lee Duty, 21, told Judge Edward D. Deake he does not want to remain in the Washtenaw County Jail.

“I’m under the jurisdiction of the Department of Corrections and I want to go back to the Riverside Facility,” Duty said.

The defendant’s attorney. Assistant Public Defender Keith Norman, told Judge Deake that Duty is being kept in “punitive segregation” in the jail.

BUT THE JUDGE denied the prison request and said Duty will be kept in jail at least until his pre-trial conference April 6.

Duty was sentenced, to a 9-to-20-year prison term by Judge Deake two years ago after a jury found him guilty of robbing the Huron Valley National Bank branch at 777 N. University Ave. in 1975. The jury deliberated 30 minutes before returning the guilty verdict.

However, in January the conviction was overturned when the State Court of Appeals ruled former Assistant County prosecutor Ronald Mellish used improper questions.

Judge Edward D. Deake took the action in the case of Rick D. Bennett, 25, a resident of Canton Township, just east of Ypsilanti. Bennett was arrested last September after Ypsilanti police said he used his red sedan to chase and then run off Hewitt Road a motorcycle ridden by Michael Bachman and Russell Wilson, both of Ypsilanti Township. Bachman and Wilson were hospitalized for some time from injuries received when their cycle hit a parked van.

Police said Bennett’s pursuit of the cycle came after the defendant and his companions had become involved in a fight with Bachman, Wilson, and others at the Suds Factory, an Ypsilanti bar.

A FORMER BOY SCOUT leader from Saline, convicted of two sex offenses involving young boys, was ordered by a Circuit Court judge on Friday not to become involved in any youth activity during a five-year probationary period.

“A special condition of your probation is that you not become involved in any youth organization or activity,” Judge Campbell told the local truck driver. “Also, that you obtain psychiatric counseling.”

Webb was arrested last fall by Saline police who said he had sexually molested two boys under the age of 13. Investigators said both incidents were connected with first-aid instruction which Webb was giving as an adult Boy Scout leader.

“THE DEFENDANT stands before this court not convicted of any crime. We’re asking for a bond reduction.” An Ann Arbor attorney who won a reversal of a conviction of an Ypsilanti man convicted of setting a fire that killed two persons used these words this week in arguing that his client should be freed pending a new trial.

Michael Stillwagon, representing Jessee Lee wright, appeared before Circuit Court Judge Edward D. Deake to ask for a personal recognizance bond. Wright was convicted in 1976 of felony murder in the 1975 deaths of Joseph Thomas and Odell Barnes. The victims died in the fire which consumed their apartment house at 420 S. Washington Street in Ypsilanti.

In a taped statement given to Ypsilanti police Wright confessed setting the fatal fire because he was “mad” at one of the occupants of the building. The State Court of Appeals three months ago reversed the conviction and ordered a new trial on the grounds the element of malice was not properly shown by Senior Assistant Prosecutor Lynwood Noah.

“I'm setting a pre-trial conference for April 20. Two persons died in that fire. I think the case deserves the bond now ordered — $100,000 on each count.”