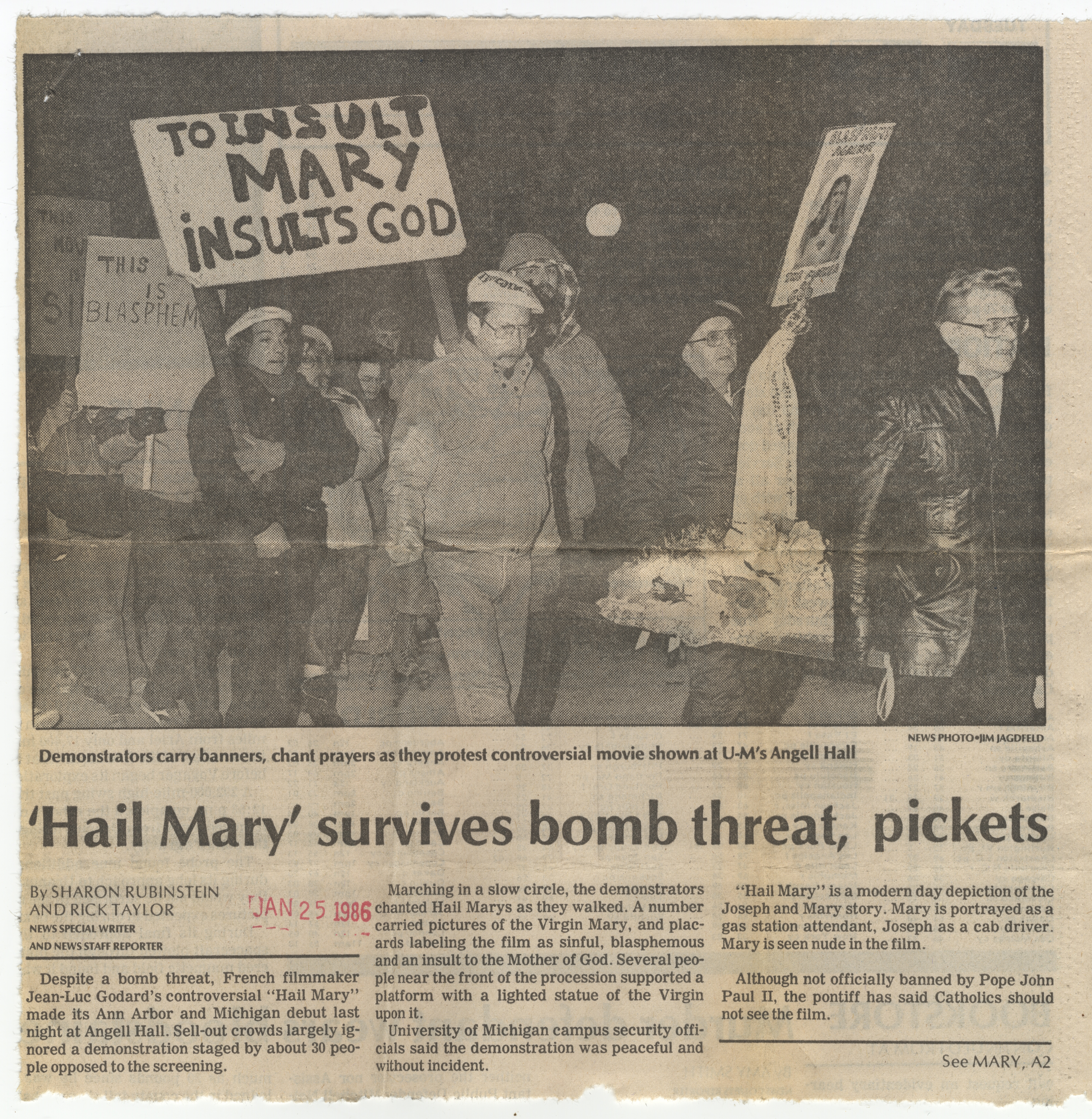 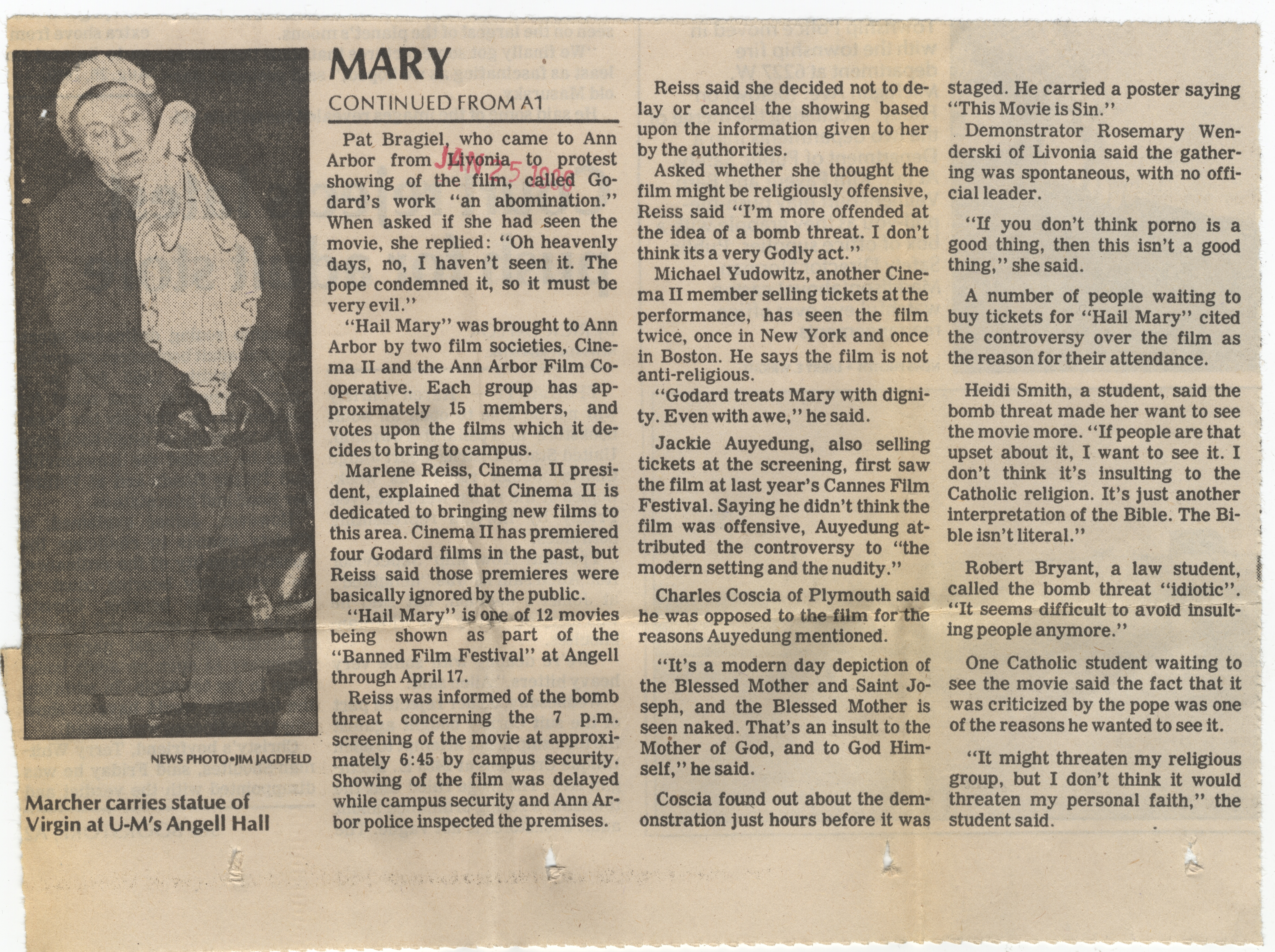 Marching in a slow circle, the demonstrators "Hail Mary" is a modern day depiction of the
AND RICK TAYLOR JAN 2 5 A3QO chanted Hai1 Marys as they walked. A number Joseph and Mary story. Mary is portrayed as a
- - -~ .. carried pictures of the Virgin Mary, and plac- gas station attendant, Joseph as a cab driver.
'WNFWS STAFF REPORTER .•________ ards labeling the film as sinful, blasphemous Mary is seen nude in the film.

iJt-'apite a bomb threat, French filmmaker pie near the front of the procession supported a Although not officially banned by Pope John
Jean-Luc Godard's controversial "Hail Mary" platform with a lighted statue of the Virgin Paul II, the pontiff has said Catholics should
made its Ann Arbor and Michigan debut last upon it. not see the film.
• night at Angell Hall. Sell-out crowds largely ig- University of Michigan campus security offi- ____________ ____

pie opposed to the screening, without incident. See MARY, A2

Marcher carries statue of
Virgin at U-M's A ill

Pat, Bragiel, who came to Ann
Arbor from^wftfi^ic tp protest
showing of the film, called Go-
dard's work "an abomination."
When asked if she had seen the
movie, she replied: "Oh heavenly
days, no. I haven't seen it. The
pope condemned it, so it must be
very evil."

i Each group has ap-

y 15 members, and
votes upon the films which it de-
cides to bring to campus.

Marlene Reiss, Cinema II presi-
dent, explained that Cinema n is
dedicated to bringing new films to
this area. Cinema II has premiered
fror Onr'nrd films in the past, but

those premieres were
0£tt)iC(»n,v ignored by the public.

i of the bomb
..irfct-l c-i—— —;io the 7 p.m.
screening of the movie at approxi-
mately 6:45 by campus security.
Showing of the film was delayed
while campus security and Ann Ar-
bor police inspected the premises.

Reiss said she decided not to de-
lay or cancel the showing based
upon the information given to her
by the authorities.

Asked whether she thought the
film might be religiously offensive,
Reiss said "I'm more offended at
the idea of a bomb threat. I don't
think its a very Godly act."

Michael Yudowltz, another Cine-
ma II member sei'irn» tickets at the
performance, 'i. the film
twice, once in New i aih and once
in Boston. He says the film is not
anti-religious.

"Godard treats Mary with digni-
ty. Even with awe," he said.

Jackie Auyedung, also selling
tickets at the screening, first saw
the film at last year's Cannes Film
Festival. Saying he didn't think the
film was offensive, Auyedung at-
tributed the controversy to "the
modern setting and the nudity."

staged. He carried a poster saying
"This Movie is Sin."

ing was spontaneous, with no offi-
cial leader.

A number of people waiting to
buy tickets for "Hail Mary" cited
the controversy over the film as
the reason tor their attendance.

don't think it's insulting to the
Catholic religion. It's just another
interpretation of the Bible. The Bi-
ble isn't literal."

One Catholic student waiting to
see the movie said the fact that it
was criticized by the pope was one
of the reasons he wanted to see it.

"It might threaten my religious
group, but I don't think it would
threaten my personal faith." the
student said. '