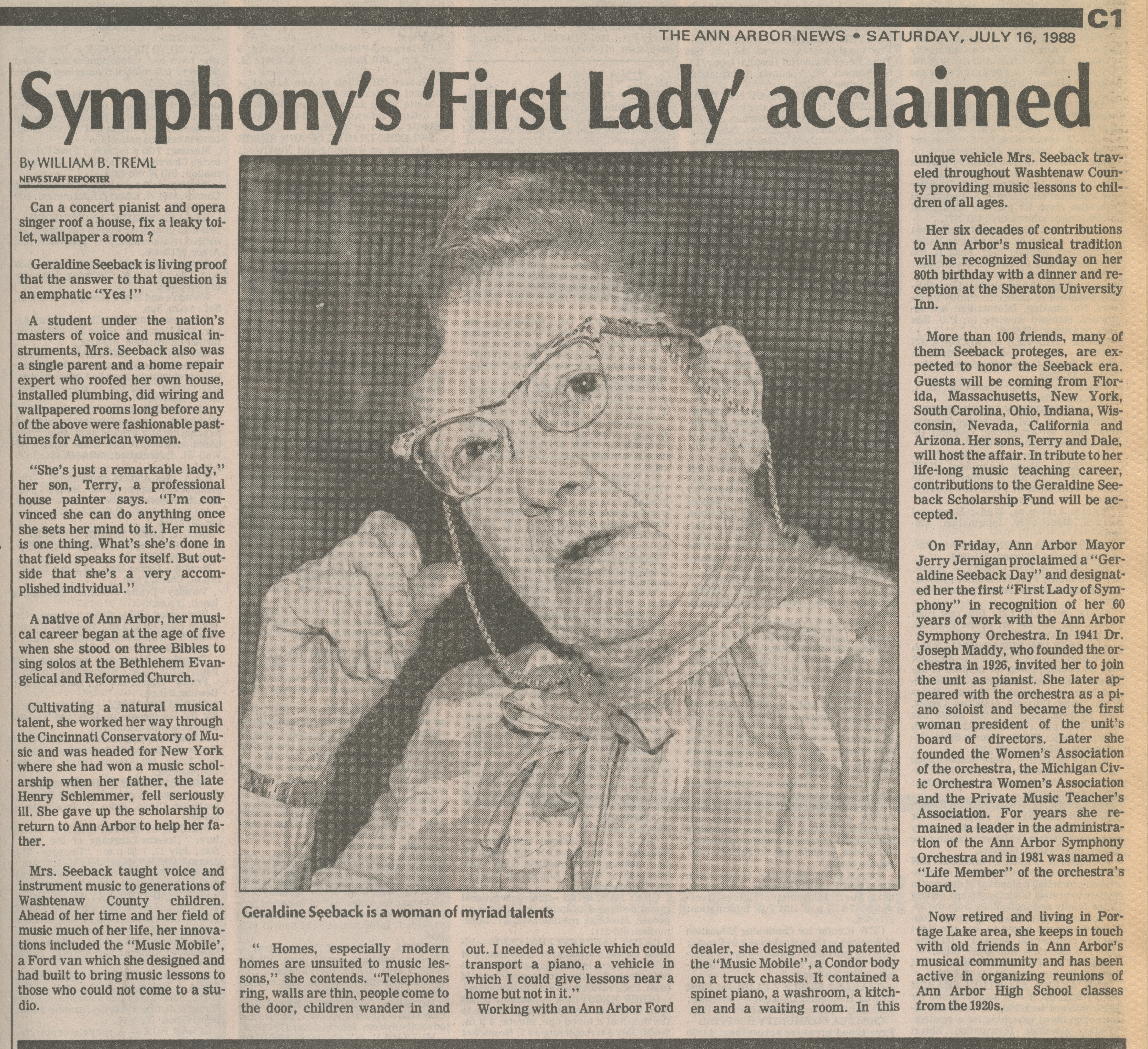 Geraldine Seeback is a woman of myriad talents

Can a concert pianist and opera singer roof a house, fix a leaky toilet, wallpaper a room?

Geraldine Seeback is living proof that the answer to that question is an emphatic “Yes!”

A student under the nation’s masters of voice and musical instruments, Mrs. Seeback also was a single parent and a home repair expert who roofed her own house, installed plumbing, did wiring and wallpapered rooms long before any of the above were fashionable past-times for American women.

“She’s just a remarkable lady,” her son, Terry, a professional house painter says. “I’m convinced she can do anything once she sets her mind to it. Her music is one thing. What’s she’s done in that field speaks for itself. But outside that she’s a very accomplished individual.”

A native of Ann Arbor, her musical career began at the age of five when she stood on three Bibles to sing solos at the Bethlehem Evangelical and Reformed Church.

Cultivating a natural musical talent, she worked her way through the Cincinnati Conservatory of Music and was headed for New York where she had won a music scholarship when her father, the late Henry Schlemmer, fell seriously ill. She gave up the scholarship to return to Ann Arbor to help her father.

Mrs. Seeback taught voice and instrument music to generations of Washtenaw County children. Ahead of her time and her field of music much of her life, her innovations included the “Music Mobile’, a Ford van which she designed and had built to bring music lessons to those who could not come to a studio.

“Homes, especially modern homes are unsuited to music lessons,” she contends. “Telephones ring, walls are thin, people come to the door, children wander in and out. I needed a vehicle which could transport a piano, a vehicle in which I could give lessons near a home but not in it.”

Working with an Ann Arbor Ford dealer, she designed and patented the “Music Mobile", a Condor body on a truck chassis. It contained a spinet piano, a washroom, a kitchen and a waiting room. In this unique vehicle Mrs. Seeback traveled throughout Washtenaw County providing music lessons to children of all ages.

More than 100 friends, many of them Seeback proteges, are expected to honor the Seeback era. Guests will be coming from Florida, Massachusetts, New York, South Carolina, Ohio, Indiana, Wisconsin, Nevada, California and Arizona. Her sons, Terry and Dale, will host the affair. In tribute to her life-long music teaching career, contributions to the Geraldine Seeback Scholarship Fund will be accepted.

On Friday, Ann Arbor Mayor Jerry Jemigan proclaimed a “Geraldine Seeback Day” and designated her the first “First Lady of Symphony” in recognition of her 60 years of work with the Ann Arbor Symphony Orchestra. In 1941 Dr. Joseph Maddy, who founded the orchestra in 1926, invited her to join the unit as pianist. She later appeared with the orchestra as a piano soloist and became the first woman president of the unit’s board of directors. Later she founded the Women’s Association of the orchestra, the Michigan Civic Orchestra Women’s Association and the Private Music Teacher’s Association. For years she remained a leader in the administration of the Ann Arbor Symphony Orchestra and in 1981 was named a “Life Member” of the orchestra’s board.

Now retired and living in Portage Lake area, she keeps in touch with old friends in Ann Arbor’s musical community and has been active in organizing reunions of Ann Arbor High School classes from the 1920s.