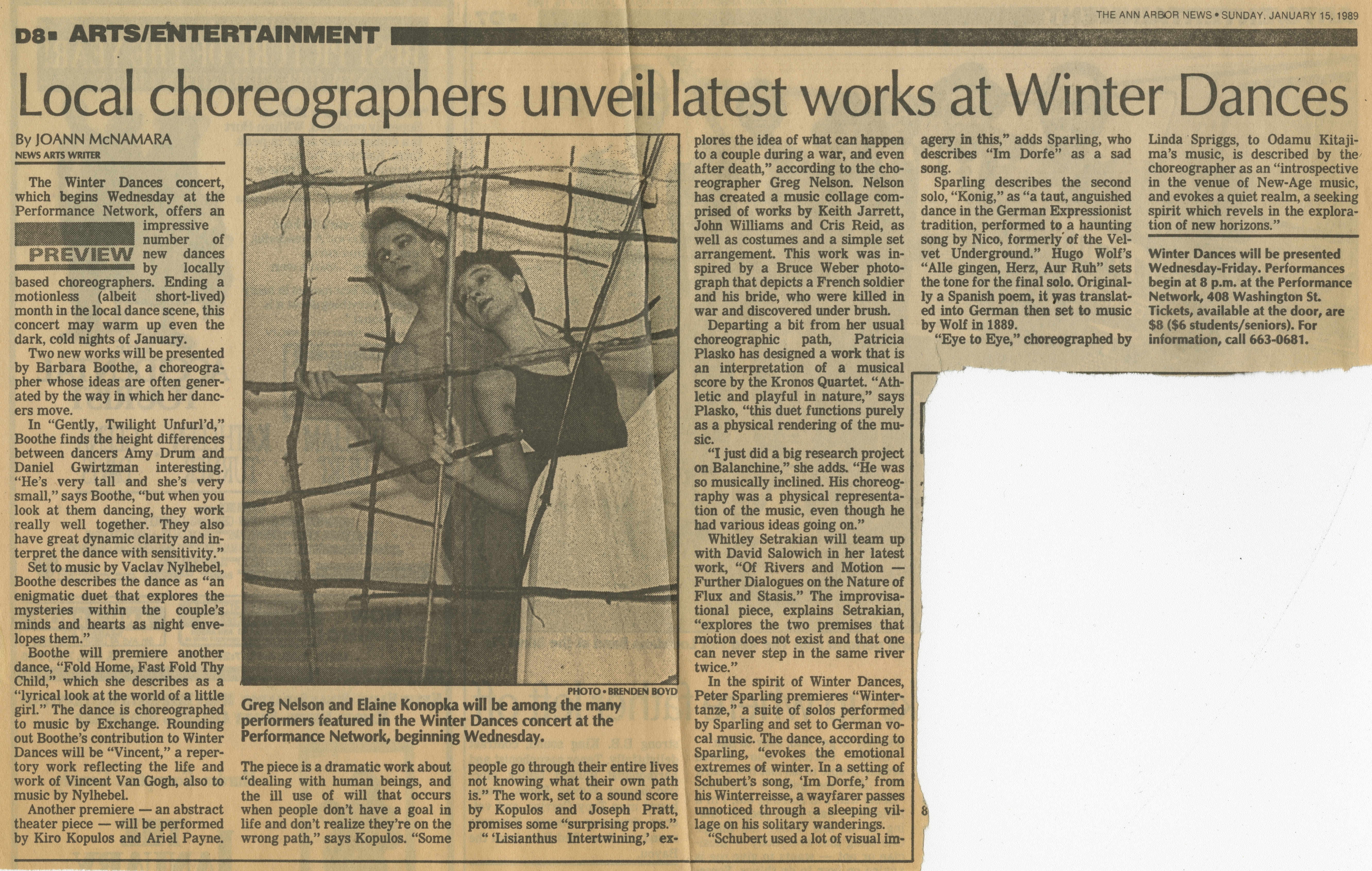 Greg Nelson and Elaine Konopka will be among performers featured in the Winter Dances concert a Performance Network, beginning Wednesday.
PHOTO ■ BRENDEN BOYD

The Winter Dances concert, which begins Wednesday at the Performance Network, offers an impressive number of new dances by locally based choreographers. Ending a motionless (albeit short-lived) month in the local dance scene, this concert may warm up even the dark, cold nights of January.

Two new works will be presented by Barbara Boothe, a choreographer whose ideas are often generated by the way in which her dancers move.

In “Gently, Twilight Unfurl’d,” Boothe finds the height differences between dancers Amy Drum and Daniel Gwirtzman interesting. “He’s very tall and she’s very small,” says Boothe, “but when you look at them dancing, they work really well together. They also have great dynamic clarity and interpret the dance with sensitivity.” Set to music by Vaclav Nylhebel, Boothe describes the dance as “an enigmatic duet that explores the mysteries within the couple’s minds and hearts as night envelopes them.”

Boothe will premiere another dance, “Fold Home, Fast Fold Thy Child,” which she describes as a “lyrical look at the world of a little girl.” The dance is choreographed to music by Exchange. Rounding out Boothe’s contribution to Winter Dances will be “Vincent,” a repertory work reflecting the life and work of Vincent Van Gogh, also to music by Nylhebel.

Another premiere — an abstract theater piece — will be performed by Kiro Kopulos and Ariel Payne.

The piece is a dramatic work about “dealing with human beings, and the ill use of will that occurs when people don’t have a goal in life and don’t realize they’re on the wrong path,” says Kopulos. “Some people go through their entire lives not knowing what their own path is.” The work, set to a sound score by Kopulos and Joseph Pratt, promises some “surprising props.”

“‘Lisianthus Intertwining,’ explores the idea of what can happen to a couple during a war, and even after death,” according to the choreographer Greg Nelson. Nelson has created a music collage comprised of works by Keith Jarrett, John Williams and Cris Reid, as well as costumes and a simple set arrangement. This work was inspired by a Bruce Weber photograph that depicts a French soldier and his bride, who were killed in war and discovered under brush.

Departing a bit from her usual choreographic path, Patricia Plasko has designed a work that is an interpretation of a musical score by the Kronos Quartet. “Athletic and playful in nature,” says Plasko, “this duet functions purely as a physical rendering of the music.

“I just did a big research project on Balanchine,” she adds. “He was so musically inclined. His choreography was a physical representation of the music, even though he had various ideas going on.”

Whitley Setrakian will team up with David Salowich in her latest work, “Of Rivers and Motion — Further Dialogues on the Nature of Flux and Stasis.” The improvisational piece, explains Setrakian, “explores the two premises that motion does not exist and that one can never step in the same river twice.”

In the spirit of Winter Dances, Peter Sparling premieres “Wintertanze,” a suite of solos performed by Sparling and set to German vocal music. The dance, according to Sparling, “evokes the emotional extremes of winter. In a setting of Schubert’s song, ‘Im Dorfe,’ from his Winterreisse, a wayfarer passes unnoticed through a sleeping village on his solitary wanderings.

“Schubert used a lot of visual imagery in this,” adds Sparling, who describes “Im Dorfe” as a sad song.

Sparling describes the second solo, “Konig,” as “a taut, anguished dance in the German Expressionist tradition, performed to a haunting song by Nico, formerly of the Velvet Underground.” Hugo Wolf’s “Alle gingen, Herz, Aur Ruh” sets the tone for the final solo. Originally a Spanish poem, it was translated into German then set to music by Wolf in 1889.

“Eye to Eye,” choreographed by Linda Spriggs, to Odamu Kitajima’s music, is described by the choreographer as an “introspective in the venue of New-Age music, and evokes a quiet realm, a seeking spirit which revels in the exploration of new horizons.”

Winter Dances will be presented Wednesday-Friday. Performances begin at 8 p.m. at the Performance Network, 408 Washington St. Tickets, available at the door, are $8 ($6 students/seniors). For information, call 663-0681.