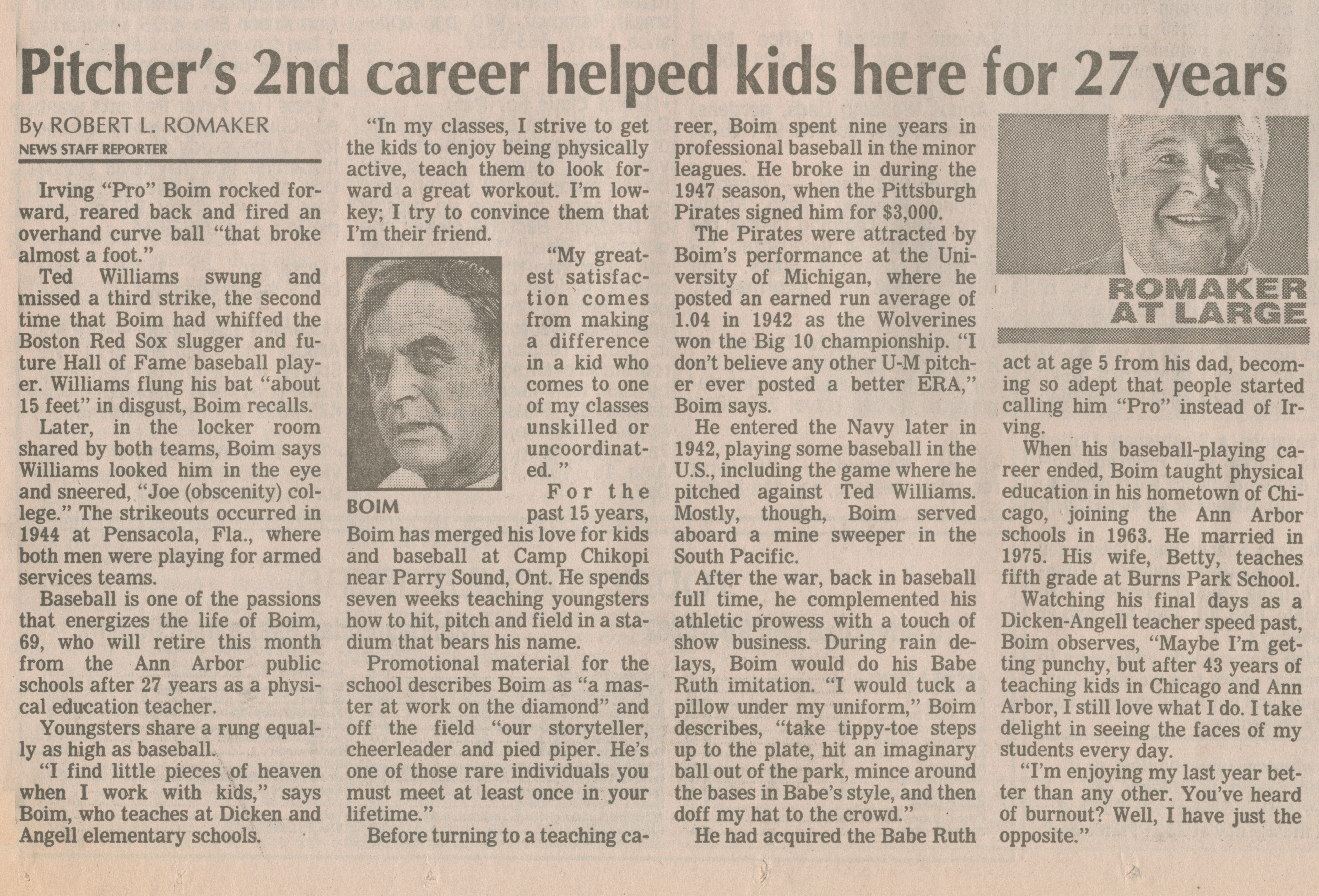 Later, in the locker room shared by both teams, Boim says Williams looked him in the eye and sneered, “Joe (obscenity) college.” The strikeouts occurred in 1944 at Pensacola, Fla., where both men were playing for armed services teams.

Baseball is one of the passions that energizes the life of Boim, 69, who will retire this month from the Ann Arbor public schools after 27 years as a physical education teacher.

Youngsters share a rung equally as high as baseball.

“I find little pieces of heaven when I work with kids,” says Boim, who teaches at Dicken and Angell elementary schools.

“In my classes, I strive to get the kids to enjoy being physically active, teach them to look forward a great workout. I’m low-key; I try to convince them that I’m their friend.

“My greatest satisfaction comes from making a difference in a kid who comes to one of my classes unskilled or uncoordinated. ”

For the past 15 years, Boim has merged his love for kids and baseball at Camp Chikopi near Parry Sound, Ont. He spends seven weeks teaching youngsters how to hit, pitch and field in a stadium that bears his name.

Promotional material for the school describes Boim as “a master at work on the diamond” and off the field “our storyteller, cheerleader and pied piper. He’s one of those rare individuals you must meet at least once in your lifetime.”

Before turning to a teaching career, Boim spent nine years in professional baseball in the minor leagues. He broke in during the 1947 season, when the Pittsburgh Pirates signed him for $3,000.

The Pirates were attracted by Boim’s performance at the University of Michigan, where he posted an earned run average of 1.04 in 1942 as the Wolverines won the Big 10 championship. “I don’t believe any other U-M pitcher ever posted a better ERA,” Boim says.

He entered the Navy later in 1942, playing some baseball in the U.S., including the game where he pitched against Ted Williams. Mostly, though, Boim served aboard a mine sweeper in the South Pacific.

After the war, back in baseball full time, he complemented his athletic prowess with a touch of show business. During rain delays, Boim would do his Babe Ruth imitation. “I would tuck a pillow under my uniform,” Boim describes, “take tippy-toe steps up to the plate, hit an imaginary ball out of the park, mince around the bases in Babe’s style, and then doff my hat to the crowd.”

He had acquired the Babe Ruth act at age 5 from his dad, becoming so adept that people started calling him “Pro” instead of Irving.

When his baseball-playing career ended, Boim taught physical education in his hometown of Chicago, joining the Ann Arbor schools in 1963. He married in 1975. His wife, Betty, teaches fifth grade at Burns Park School.

Watching his final days as a Dicken-Angell teacher speed past, Boim observes, “Maybe I’m getting punchy, but after 43 years of teaching kids in Chicago and Ann Arbor, I still love what I do. I take delight in seeing the faces of my students every day.

“I’m enjoying my last year better than any other. You’ve heard of burnout? Well, I have just the opposite.”