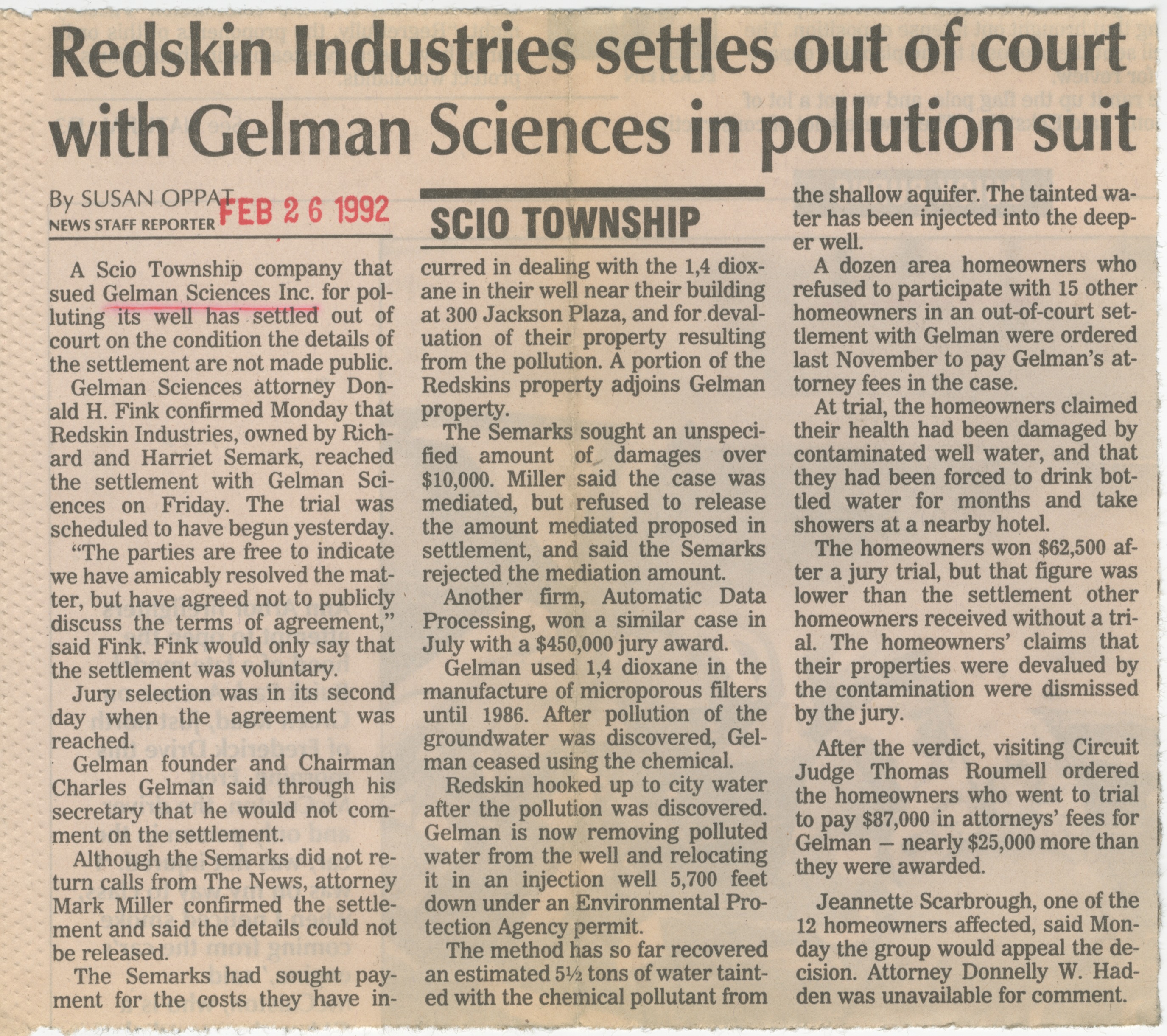 ﻿Redskin Industries settles out of court

with Gelman Sciences in pollution suit

Gelman Sciences attorney Donald H. Fink confirmed Monday that Redskin Industries, owned by Richard and Harriet Semark, reached the settlement with Gelman Sciences on Friday. The trial was scheduled to have begun yesterday.

“The parties are free to indicate we have amicably resolved the matter, but have agreed not to publicly discuss the terms of agreement,” said Fink. Fink would only say that the settlement was voluntary.

Jury selection was in its second day when the agreement was reached.

Gelman founder and Chairman Charles Gelman said through his secretary that he would not comment on the settlement.

Although the Semarks did not return calls from The News, attorney Mark Miller confirmed the settlement and said the details could not be released.

The Semarks had sought payment for the costs they have incurred in dealing with the 1,4 dioxane in their well near their building at 300 Jackson Plaza, and for devaluation of their property resulting from the pollution. A portion of the Redskins property adjoins Gelman property.

The Semarks sought an unspecified amount of damages over $10,000. Miller said the case was mediated, but refused to release the amount mediated proposed in settlement, and said the Semarks rejected the mediation amount.

Another firm, Automatic Data Processing, won a similar case in July with a $450,000 jury award.

Gelman used 1,4 dioxane in the manufacture of microporous filters until 1986. After pollution of the groundwater was discovered, Gelman ceased using the chemical.

Redskin hooked up to city water after the pollution was discovered. Gelman is now removing polluted water from the well and relocating it in an injection well 5,700 feet down under an Environmental Protection Agency permit.

The method has so far recovered an estimated 5½ tons of water tainted with the chemical pollutant from the shallow aquifer. The tainted water has been injected into the deeper well.

A dozen area homeowners who refused to participate with 15 other homeowners in an out-of-court settlement with Gelman were ordered last November to pay Gelman’s attorney fees in the case.

At trial, the homeowners claimed their health had been damaged by contaminated well water, and that they had been forced to drink bottled water for months and take showers at a nearby hotel.

The homeowners won $62,500 after a jury trial, but that figure was lower than the settlement other homeowners received without a trial. The homeowners’ claims that their properties were devalued by the contamination were dismissed by the jury.

After the verdict, visiting Circuit Judge Thomas Roumell ordered the homeowners who went to trial to pay $87,000 in attorneys’ fees for Gelman - nearly $25,000 more than they were awarded.

Jeannette Scarbrough, one of the 12 homeowners affected, said Monday the group would appeal the decision. Attorney Donnelly W. Hadden was unavailable for comment.