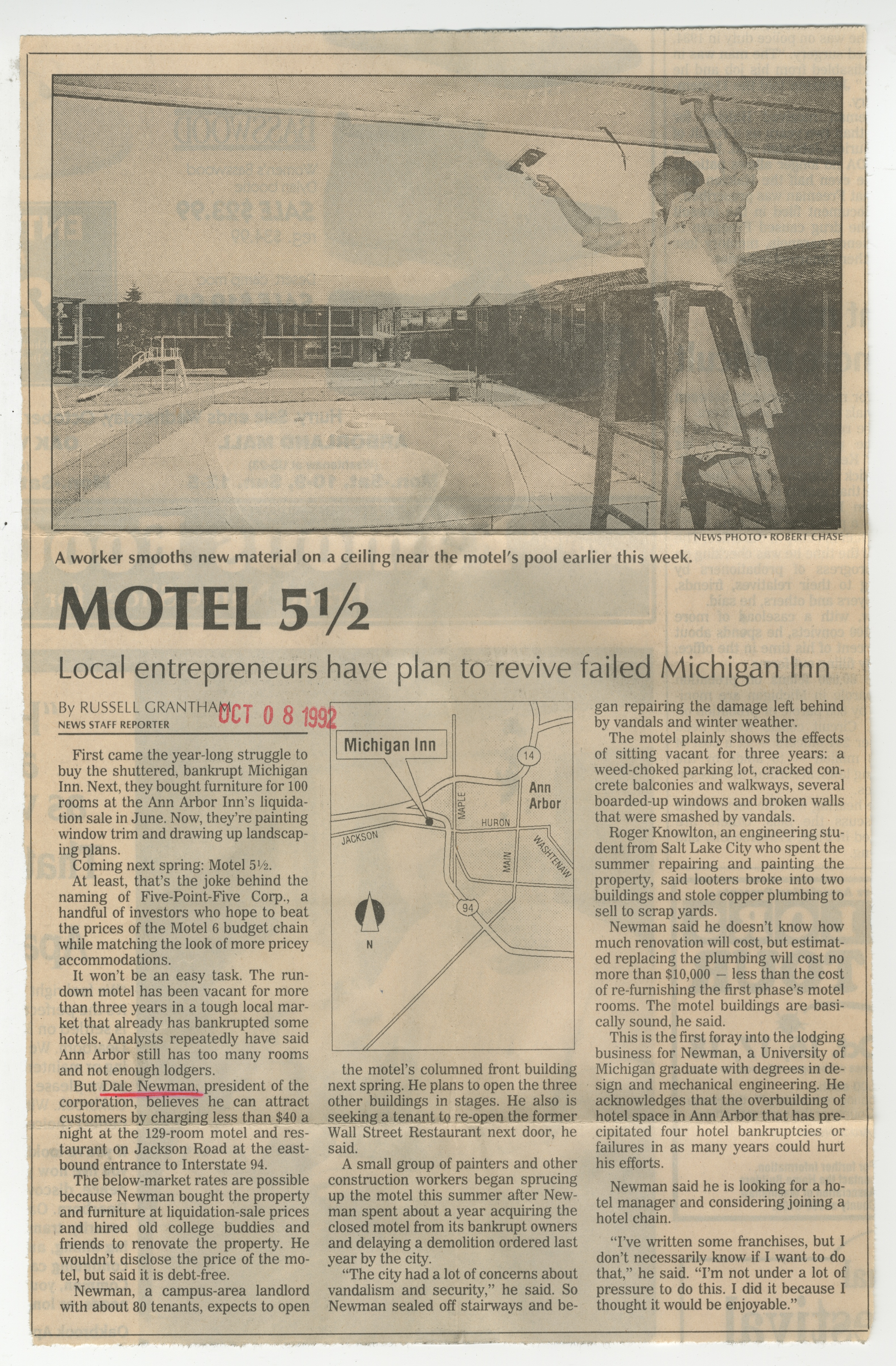 ﻿A worker smooths new material on a ceiling near the motel's pool earlier this week.

At least, that’s the joke behind the naming of Five-Point-Five Corp., a handful of investors who hope to beat the prices of the Motel 6 budget chain while matching the look of more pricey accommodations.

It won’t be an easy task. The rundown motel has been vacant for more than three years in a tough local market that already has bankrupted some hotels. Analysts repeatedly have said Ann Arbor still has too many rooms and not enough lodgers.

But Dale Newman, president of the corporation, believes he can attract customers by charging less than $40 a night at the 129-room motel and restaurant on Jackson Road at the east-bound entrance to Interstate 94.

The below-market rates are possible because Newman bought the property and furniture at liquidation-sale prices and hired old college buddies and friends to renovate the property. He wouldn't disclose the price of the motel, but said it is debt-free.

Newman, a campus-area landlord with about 80 tenants, expects to open the motel’s columned front building next spring. He plans to open the three other buildings in stages. He also is seeking a tenant to re-open the former Wall Street Restaurant next door, he said.

A small group of painters and other construction workers began sprucing up the motel this summer after Newman spent about a year acquiring the closed motel from its bankrupt owners and delaying a demolition ordered last year by the city.

“The city had a lot of concerns about vandalism and security,” he said. So Newman sealed off stairways and began repairing the damage left behind by vandals and winter weather.

The motel plainly shows the effects of sitting vacant for three years: a weed-choked parking lot, cracked concrete balconies and walkways, several boarded-up windows and broken walls that were smashed by vandals.

Roger Knowlton, an engineering student from Salt Lake City who spent the summer repairing and painting the property, said looters broke into two buildings and stole copper plumbing to sell to scrap yards.

Newman said he doesn’t know how much renovation will cost, but estimated replacing the plumbing will cost no more than $10,000 -- less than the cost of re-furnishing the first phase’s motel rooms. The motel buildings are basically sound, he said.

This is the first foray into the lodging business for Newman, a University of Michigan graduate with degrees in design and mechanical engineering. He acknowledges that the overbuilding of hotel space in Ann Arbor that has precipitated four hotel bankruptcies or failures in as many years could hurt his efforts.

Newman said he is looking for a hotel manager and considering joining a hotel chain.

“I’ve written some franchises, but I don’t necessarily know if I want to do that,” he said. “I’m not under a lot of pressure to do this. I did it because I thought it would be enjoyable.”