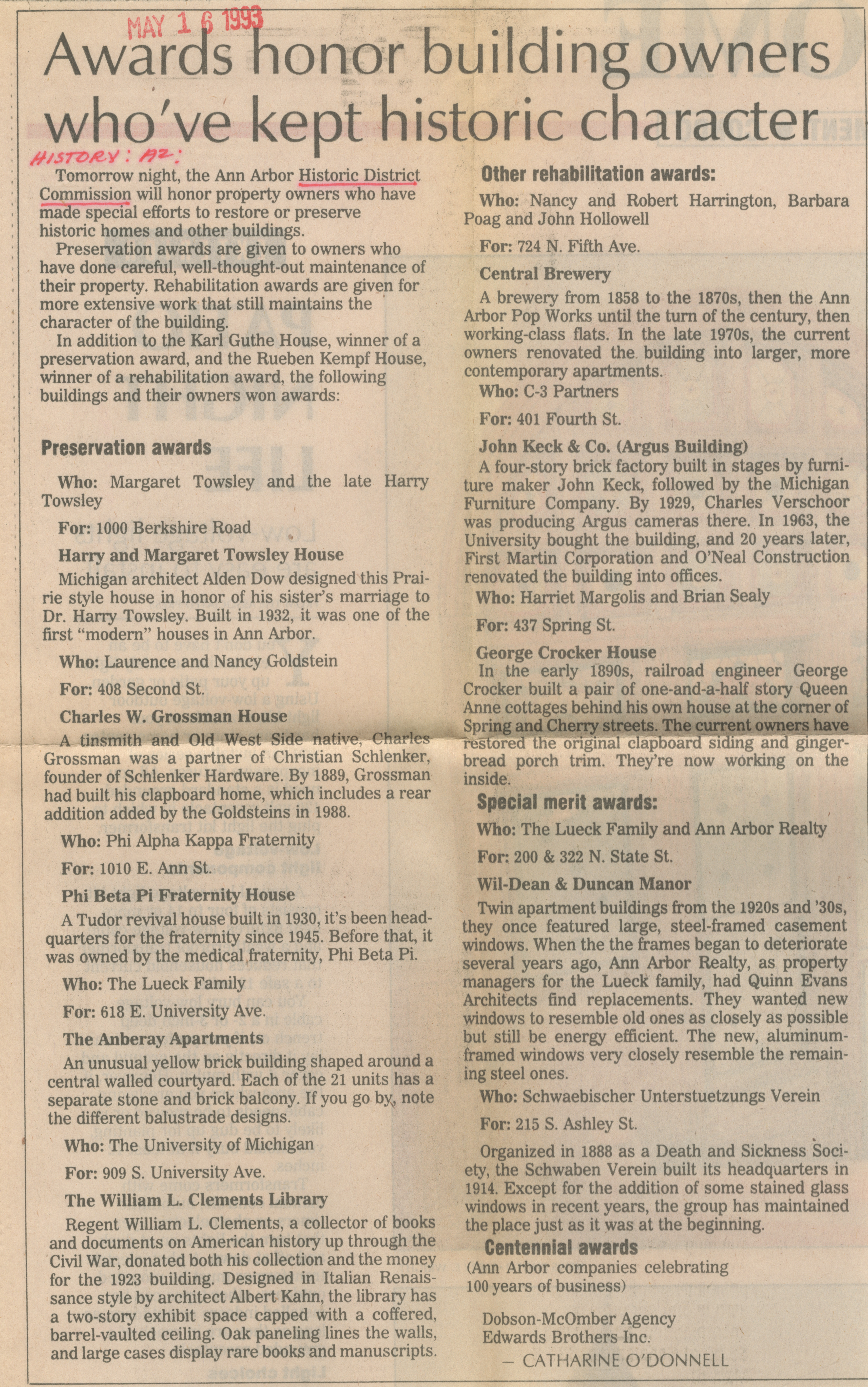 Tomorrow night, the Ann Arbor Historic District Commission will honor property owners who have made special efforts to restore or preserve historic homes and other buildings.

Who: Margaret Towsley and the late Harry Towsley

Michigan architect Alden Dow designed this Prairie style house in honor of his sister’s marriage to Dr. Harry Towsley. Built in 1932, it was one of the first “modern” houses in Ann Arbor.

Who: Laurence and Nancy Goldstein

A tinsmith and Old West Side native. Charles Grossman was a partner of Christian Schlenker, founder of Schlenker Hardware. By 1889, Grossman had built his clapboard home, which includes a rear addition added by the Goldsteins in 1988.

A Tudor revival house built in 1930, it’s been headquarters for the fraternity since 1945. Before that, it was owned by the medical fraternity, Phi Beta Pi.

Who: The Lueck Family

An unusual yellow brick building shaped around a central walled courtyard. Each of the 21 units has a separate stone and brick balcony. If you go by, note the different balustrade designs.

Who: The University of Michigan

Regent William L. Clements, a collector of books and documents on American history up through the Civil War, donated both his collection and the money for the 1923 building. Designed in Italian Renaissance style by architect Albert Kahn, the library has a two-story exhibit space capped with a coffered, barrel-vaulted ceiling. Oak paneling lines the walls, and large cases display rare books and manuscripts.

Who: Nancy and Robert Harrington, Barbara Poag and John Hollowell

A brewery from 1858 to the 1870s, then the Ann Arbor Pop Works until the turn of the century, then working-class flats. In the late 1970s, the current owners renovated the building into larger, more contemporary apartments.

A four-story brick factory built in stages by furniture maker John Keck, followed by the Michigan Furniture Company. By 1929, Charles Verschoor was producing Argus cameras there. In 1963, the University bought the building, and 20 years later, First Martin Corporation and O’Neal Construction renovated the building into offices.

Who: Harriet Margolis and Brian Sealy

In the early 1890s, railroad engineer George Crocker built a pair of one-and-a-half story Queen Anne cottages behind his own house at the comer of Spring and Cherry streets. The current owners have
"restored the original clapboard siding and gingerbread porch trim. They’re now working on the inside.

Who: The Lueck Family and Ann Arbor Realty

Twin apartment buildings from the 1920s and ’30s, they once featured large, steel-framed casement windows. When the the frames began to deteriorate several years ago, Ann Arbor Realty, as property managers for the Lueck family, had Quinn Evans Architects find replacements. They wanted new windows to resemble old ones as closely as possible but still be energy efficient. The new, aluminum framed windows very closely resemble the remaining steel ones.

Organized in 1888 as a Death and Sickness Society, the Schwaben Verein built its headquarters in 1914. Except for the addition of some stained glass windows in recent years, the group has maintained the place just as it was at the beginning.