Alive And Thriving At 75 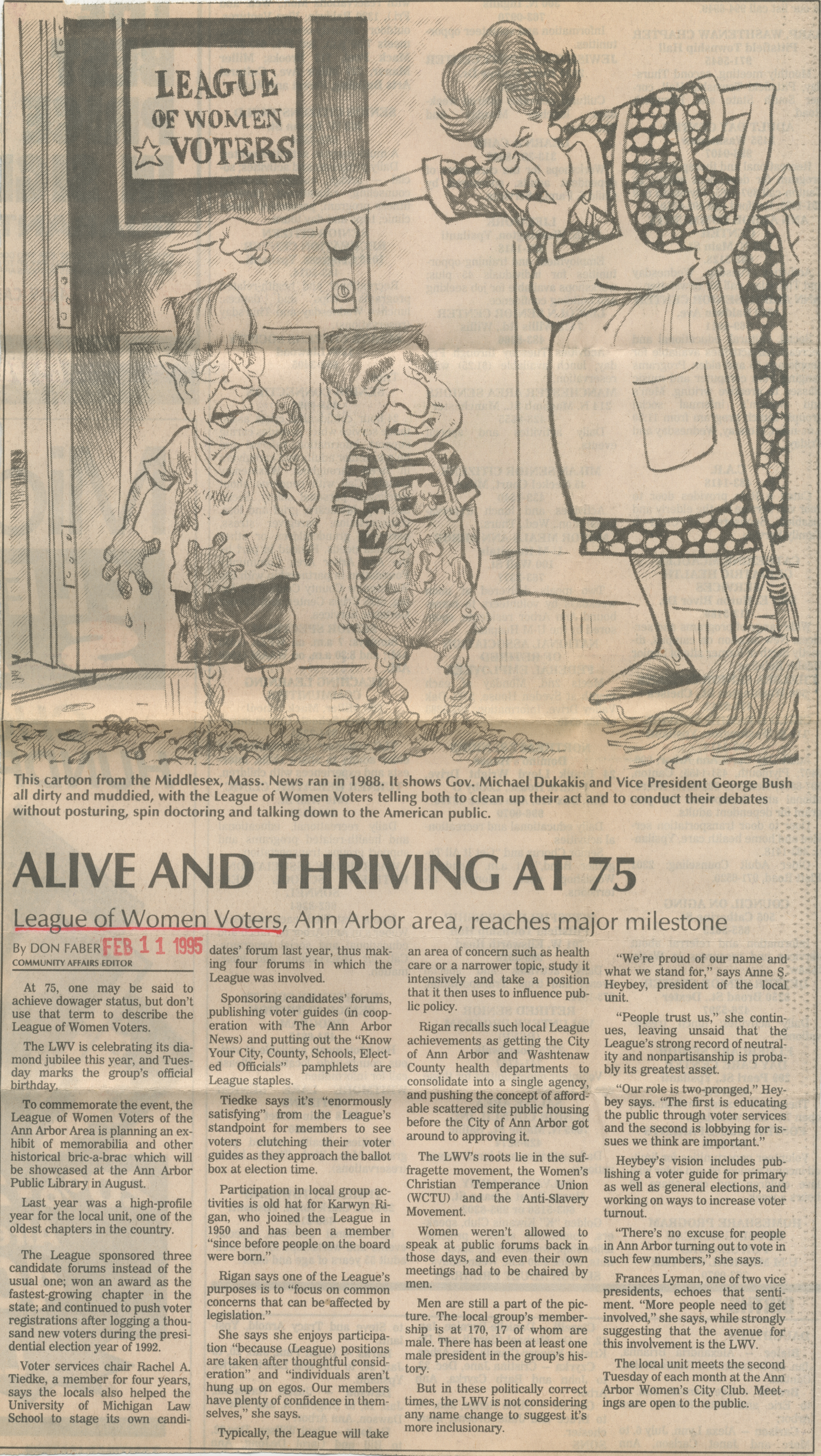 ALIVE AND THRIVING AT 75

At 75, one may be said to achieve dowager status, but don’t use that term to describe the League of Women Voters.

The LWV is celebrating its diamond jubilee this year, and Tuesday marks the group’s official birthday,

To commemorate the event, the League of Women Voters of the Ann Arbor Area is planning an exhibit of memorabilia and other historical bric-a-brac which will be showcased at the Ann Arbor Public Library in August.

Last year was a high-profile year for the local unit, one of the oldest chapters in the country.

The League sponsored three candidate forums instead of the usual one; won an award as the fastest-growing chapter in the state; and continued to push voter registrations after logging a thousand new voters during the presidential election year of 1992.

Voter services chair Rachel A. Tiedke, a member for four years, says the locals also helped the University of Michigan Law School to stage its own candidates’ forum last year, thus making four forums in which the League was involved.

Tiedke says it’s “enormously satisfying” from the League’s standpoint for members to see voters clutching their voter guides as they approach the ballot box at election time.

Participation in local group activities is old hat for Karwyn Rigan, who joined the League in 1950 and has been a member “since before people on the board were born.”

Rigan says one of the League’s purposes is to “focus on common concerns that can be affected by legislation.”

She says she enjoys participation “because (League) positions are taken after thoughtful consideration” and “individuals aren’t hung up on egos. Our members have plenty of confidence in themselves,” she says.

Typically, the League will take an area of concern such as health care or a narrower topic, study it intensively and take a position that it then uses to influence public policy.

The LWV’s roots lie in the suffragette movement, the Women’s Christian Temperance Union (WCTU) and the Anti-Slavery Movement.

Women weren’t allowed to speak at public forums back in those days, and even their own meetings had to be chaired by men.

Men are still a part of the picture. The local group’s membership is at 170, 17 of whom are male. There has been at least one male president in the group’s history.

But in these politically correct times, the LWV is not considering any name change to suggest it’s more inclusionary.

“We’re proud of our name and what we stand for,” says Anne S. Heybey, president of the local unit.

“People trust us,” she continues, leaving unsaid that the League’s strong record of neutrality and nonpartisanship is probably its greatest asset.

“Our role is two-pronged,” Heybey says. “The first is educating the public through voter services and the second is lobbying for issues we think are important.”

Heybey’s vision includes publishing a voter guide for primary as well as general elections, and working on ways to increase voter turnout.

“There’s no excuse for people in Ann Arbor turning out to vote in such few numbers,” she says.

Frances Lyman, one of two vice presidents, echoes that sentiment. “More people need to get involved,” she says, while strongly suggesting that the avenue for this involvement is the LWV.

The local unit meets the second Tuesday of each month at the Ann Arbor Women’s City Club. Meetings are open to the public.

This cartoon from the Middlesex, Mass. News ran in 1988. It shows Gov. Michael Dukakis and Vice President George Bush all dirty and muddied, with the League of Women Voters telling both to clean up their act and to conduct their debates without posturing, spin doctoring and talking down to the American public.