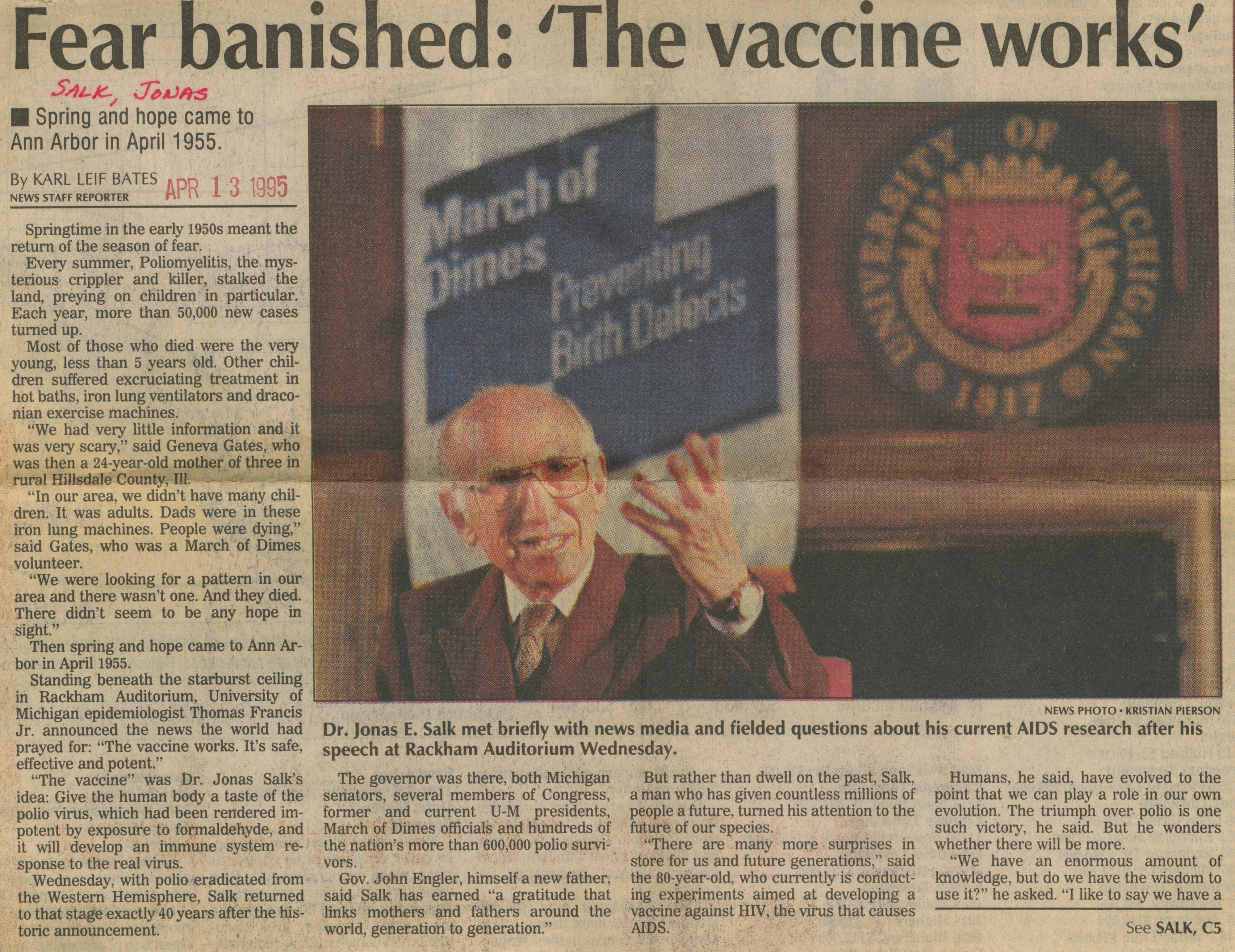 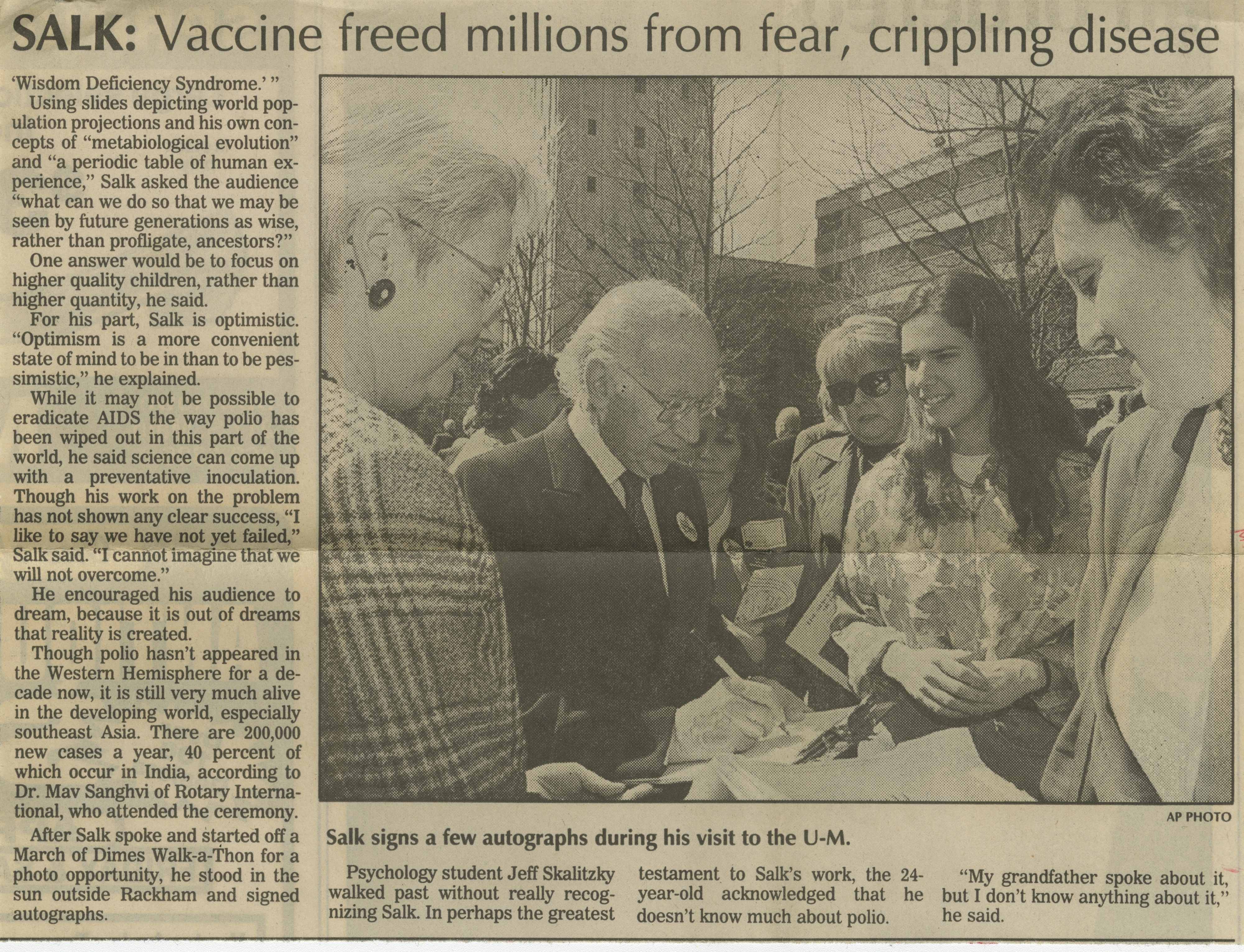 F~~!>anished: 'The vaccme wor~ 1
• Spring and hope came to i
Ann Arbor in April1955.
Springtime in the early 1950s meant the
return of the season of fear.
Every summer, Poliomyelitis, the mysterious
crippler and killer, stalked the
land, preying on children in particular.
Each year, more than 50,000 new cases
tumed up.
Most of those who died were the very
young, less than 5 years old. Other children
suffered excruciating treatment in
hot baths, iron lung ventilators and draconian
exercise machines.
"We had very little information and it
was very scary," said Geneva Gates, who
was then a 24-year-old mother of three in
rural Hillsdale County. ru
"ln our area, we didn't have many children.
It was adults. Dads were in these
iron lung machines. People were dying,"
said Gates, who was a March of Dimes
volunteer.
"We were looking for a pattern in our
area and there wasn't one. And they died.
There didn't seem to be any hope in
sighl"
Then spring and hope came to Ann Ar·
bor in April 1955.
Standing beneath the starburst ceiling
in Rackham Auditorium, University of
Michigan epidemiologist Th()mas Francis
Jr. announced the news the world had
prayed for: ''The vaccine works. It's safe,
effective and potenl"
"The vaccine" was Dr. Jonas Salk's
idea: Give the human body a taste of the
polio virus, which had been rendered impotent
by exposure to formaldehyde, and
it will develop an immune system reo
sponse to the real virus.
Wednesday. with polio eradicated from
the Western Hemisphere, Salk returned
to that stage exactly 40 years after the historic
announcement.
"'£WS I'HOTO• KRISTIA~ PI£RS0~
Or. Jonas E. Salk met briefly with news media and fielded questions about his current AIDS research after his
speech at Rackham Auditorium Wednesday.
The g()vernor was there, both Michigan
senators, severaJ members of Congress,
former and current U·M presidenlS,
March of Dimes officials and hundreds of
the nation's more than 600,000 polio survi·
vors.
Gov. John Engler, himself a new father,
said Salk has earned "a gratitude that
links mothers and fathers around the
world, generation to generation."
But rather than dwell on the past, Salk,
a man who has given counlless millions of
people a future. turned his attention to the
future of our species.
"There are many more surprises in
store for us and future generations;• said
the 80-year-{)ld, who currently is conducting
experimenlS aimed at developing a
vaccine against HIV, the virus that causes
AIDS.
Humans, he said. have evolved to the
point that we can play a role in our own
evolution. The triumph over polio is one
such vict01y, he said. But he wonders
whether there will be more
"We have an enormous amount of
knowledge. but do we have the wisdom to
use it?" he asked. "I like to say we have a
See SALK, CS

'Wisdom Deficiency Syndrome.' "
Using slides depicting world population
projections and his own con·
cepts of "metabiological evolution"
and "a periodic table of human ex·
perience," Salk asked the audience
"what can we do so that we may be
seen by future generations as wise,
rather than profligate, ancestors?"
One answer would be to focus on
higher quality children, rather than
higher quantity, he said.
For his part, Salk is optimistic.
"Optimism is a more convenient
state of mind to he in than to he pessimistic/'
he explained.
While it may not he possible to
eradicate AIDS the way polio has
heen wiped out in this part of the
world, he said science can come up
with a preventative inoculation.
Though his work on the problem
has 1101.-., any clear success, "I
lilre to IIIIYft bavellllt_Jet fllillll,"
Salk said. "I cannot imagme Uiarw e
will not overcome."
He encouraged his audience to
dream, because it is out of dreams
that reality is created.
Though polio hasn't appeared in
the Western Hemisphere for a decade
now, it is still >ery much ali>e
in the developing world, especially
southeast Asia. There are 200,000
new cases a year, 40 percent of
which occur in India, according to
Dr. Mav Sanghvi of Rotary International,
who attended the ceremony.
Alter Salk spoke and started off a
March of Dimes Walk-a-'i'hon for a
photo opportunity, he stood in the
sun outside Rackham and signed
autographs.
Salk signs a few autographs during his visit to the U-M.
Psychology student Jeff Skalitzky testament to Salk's work, the 24· "My grandfather spoke about it,
walked past without really recog- year-old acknowledged that he but I don't know anything about it,"
nizing Salk. In perhaps the greatest doesn't know much about polio. he said.