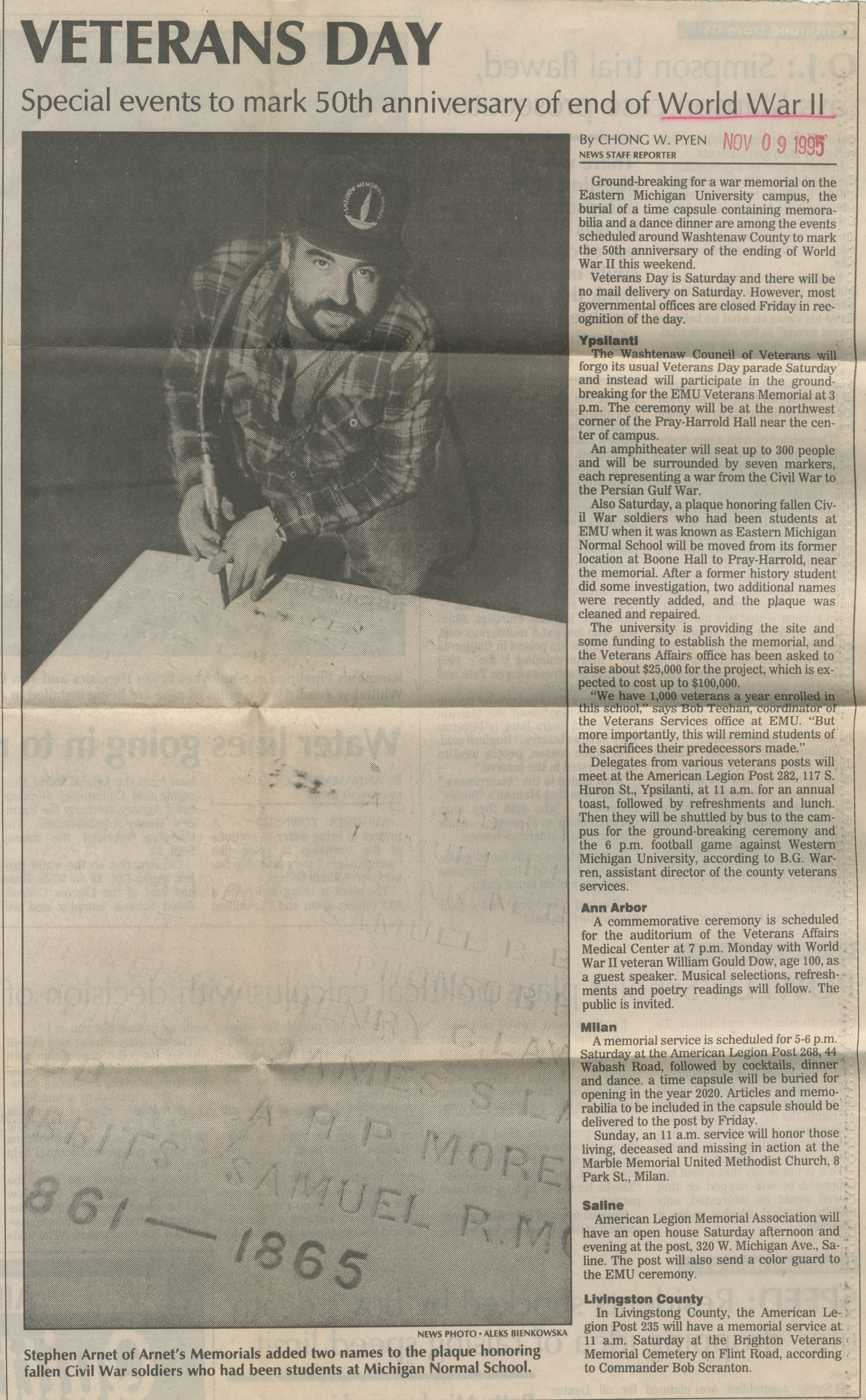 Ground-breaking for a war memorial on the Eastern Michigan University campus, the burial of a time capsule containing memorabilia and a dance dinner are among the events scheduled around Washtenaw County to mark the 50th anniversary of the ending of World War II this weekend.

Veterans Day is Saturday and there will be no mail delivery on Saturday. However, most governmental offices are closed Friday in recognition of the day.

The Washtenaw Council of Veterans will forgo its usual Veterans Day parade Saturday and instead will participate in the groundbreaking for the EMU Veterans Memorial at 3 p.m. The ceremony will be at the northwest comer of the Pray-Harrold Hall near the center of campus.

An amphitheater will seat up to 300 people and will be surrounded by seven markers, each representing a war from the Civil War to the Persian Gulf War.

Also Saturday, a plaque honoring fallen Civil War soldiers who had been students at EMU when it was known as Eastern Michigan Normal School will be moved from its former location at Boone Hall to Pray-Harrold, near the memorial. After a former history student did some investigation, two additional names were recently added, and the plaque was cleaned and repaired.

The university is providing the site and some funding to establish the memorial, and the Veterans Affairs office has been asked to raise about $25,000 for the project, which is expected to cost up to $100,000.

“We have 1,000 veterans a year enrolled in this school," says Bob Teehan, coordinator of he Veterans Services office at EMU. “But more importantly, this will remind students of the sacrifices their predecessors made.”

Delegates from various veterans posts will meet at the American Legion Post 282, 117 S. Huron St., Ypsilanti, at 11 a.m. for an annual toast, followed by refreshments and lunch. Then they will be shuttled by bus to the campus for the ground-breaking ceremony and the 6 p.m. football game against Western Michigan University, according to B.G. Warren, assistant director of the county veterans services.

A commemorative ceremony is scheduled for the auditorium of the Veterans Affairs Medical Center at 7 p.m. Monday with World War II veteran William Gould Dow, age 100, as a guest speaker. Musical selections, refreshments and poetry readings will follow. The public is invited.

A memorial service is scheduled for 5-6 p.m. Saturday at the American Legion Post 268, 44 Wabash Road, followed by cocktails, dinner and dance, a time capsule will be buried for opening in the year 2020. Articles and memorabilia to be included in the capsule should be delivered to the post by Friday.

Sunday, an 11 a.m. service will honor those living, deceased and missing in action at the Marble Memorial United Methodist Church, 8 Park St., Milan.

American Legion Memorial Association will have an open house Saturday afternoon and evening at the post, 320 W. Michigan Ave., Saline. The post will also send a color guard to the EMU ceremony.

In Livingston County, the American Legion Post 235 will have a memorial service at 11 a.m. Saturday at the Brighton Veterans Memorial Cemetery on Flint Road, according to Commander Bob Scranton.