'Fiddler' Tinged With Visions Of Chagall 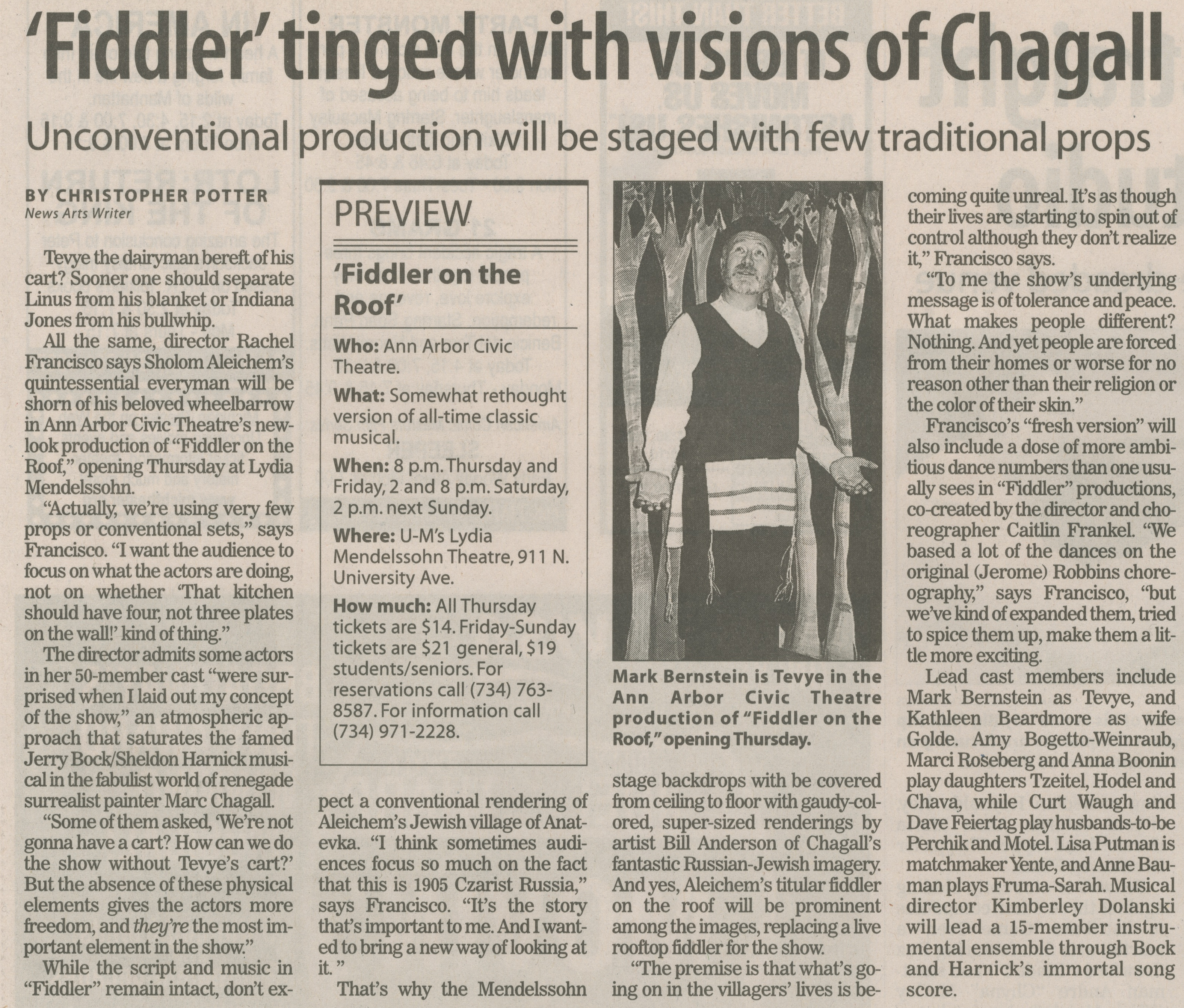 ﻿'Fiddler' tinged with visions of Chagall

Unconventional production will be staged with few traditional props

Tevye the dairyman bereft of his cart? Sooner one should separate Linus from his blanket or Indiana Jones from his bullwhip.

All the same, director Rachel Francisco says Sholom Aleichem’s quintessential everyman will be shorn of his beloved wheelbarrow in Ann Arbor Civic Theatre’s new-look production of “Fiddler on the Roof,” opening Thursday at Lydia Mendelssohn.

“Actually, we’re using very few props or conventional sets,” says Francisco. “I want the audience to focus on what the actors are doing, not on whether That kitchen should have four, not three plates on the wall!’ kind of thing.”

The director admits some actors in her 50-member cast “were surprised when I laid out my concept of the show,” an atmospheric approach that saturates the famed Jerry Bock/Sheldon Hamick musical in the fabulist world of renegade surrealist painter Marc Chagall.

“Some of them asked, “We’re not gonna have a cart? How can we do the show without Tevye’s cart?’ But the absence of these physical elements gives the actors more freedom, and they’re the most important element in the show.”

While the script and music in “Fiddler” remain intact, don’t expect a conventional rendering of Aleichem’s Jewish village of Anatevka. “I think sometimes audiences focus so much on the fact that this is 1905 Czarist Russia,” says Francisco. “It’s the story that’s important to me. And I wanted to bring a new way of looking at it.”

That’s why the Mendelssohn stage backdrops with be covered from ceiling to floor with gaudy-colored, super-sized renderings by artist Bill Anderson of Chagall’s fantastic Russian-Jewish imagery. And yes, Aleichem’s titular fiddler on die roof will be prominent among the images, replacing a live rooftop fiddler for the show.

‘The premise is that what’s going on in the villagers’ lives is becoming quite unreal. It’s as though their lives are starting to spin out of control although they don’t realize it,” Francisco says.

“To me the show’s underlying message is of tolerance and peace. What makes people different? Nothing. And yet people are forced from their homes or worse for no reason other than their religion or the color of their skin.”

Francisco’s “fresh version” will also include a dose of more ambitious dance numbers than one usually sees in “Fiddler” productions, co-created by the director and choreographer Caitlin Frankel. “We based a lot of the dances on the original (Jerome) Robbins choreography,” says Francisco, “but we’ve kind of expanded them, tried to spice them up, make them a little more exciting.

'Fiddler on the Roof'

Mark Bernstein is Tevye in the Ann Arbor Civic Theatre production of "Fiddler on the Roof," opening Thursday.