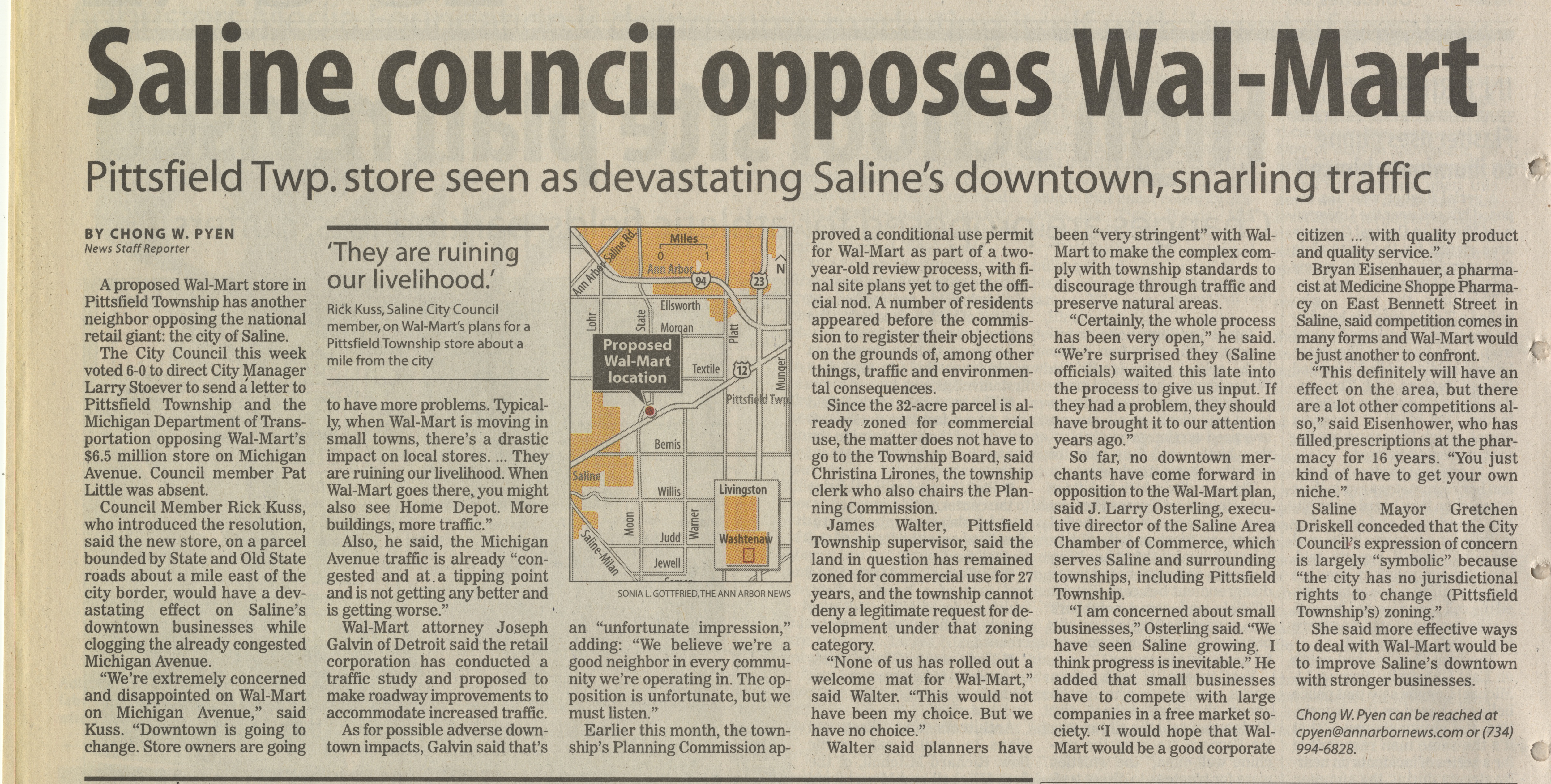 A proposed Wal-Mart store in Pittsfield Township has another neighbor opposing the national retail giant: the city of Saline.

Council Member Rick Kuss, who introduced the resolution, said the new store, on a parcel bounded by State and Old State roads about a mile east of the city border, would have a devastating effect on Saline’s downtown businesses while clogging the already congested Michigan Avenue.

“We’re extremely concerned and disappointed on Wal-Mart on Michigan Avenue,” said Kuss. “Downtown is going to change. Store owners are going to have more problems. Typically, when Wal-Mart is moving in small towns, there’s a drastic impact on local stores.... They are ruining our livelihood. When Wal-Mart goes there, you might also see Home Depot. More buildings, more traffic.”

Also, he said, the Michigan Avenue traffic is already “congested and at a tipping point and is not getting any better and is getting worse.”

As for possible adverse downtown impacts, Galvin said that’s an “unfortunate impression,” adding: “We believe we’re a good neighbor in every community we’re operating in. The opposition is unfortunate, but we must listen.”

Earlier this month, the township’s Planning Commission approved a conditional use permit for Wal-Mart as part of a two-year-old review process, with final site plans yet to get the official nod. A number of residents appeared before the commission to register their objections on the grounds of, among other things, traffic and environmental consequences.

Since the 32-acre parcel is already zoned for commercial use, the matter does not have to go to the Township Board, said Christina Lirones, the township clerk who also chairs the Planning Commission.

James Walter, Pittsfield Township supervisor, said the land in question has remained zoned for commercial use for 27 years, and the township cannot deny a legitimate request for development under that zoning category.

“None of us has rolled out a welcome mat for Wal-Mart,” said Walter. “This would not have been my choice. But we have no choice.”

Walter said planners have been “very stringent” with Wal-Mart to make the complex comply with township standards to discourage through traffic and preserve natural areas.

“Certainly, the whole process has been very open,” he said. “We’re surprised they (Saline officials) waited this late into the process to give us input. If they had a problem, they should have brought it to our attention years ago.”

So far, no downtown merchants have come forward in opposition to the Wal-Mart plan, said J. Larry Osterling, executive director of the Saline Area Chamber of Commerce, which serves Saline and surrounding townships, including Pittsfield Township.

“I am concerned about small businesses,” Osterling said. “We have seen Saline growing. I think progress is inevitable.” He added that small businesses have to compete with large companies in a free market society. “I would hope that Wal-Mart would be a good corporate citizen ... with quality product and quality service.”

Bryan Eisenhauer, a pharmacist at Medicine Shoppe Pharmacy on East Bennett Street in Saline, said competition comes in many forms and Wal-Mart would be just another to confront.

“This definitely will have an effect on the area, but there are a lot other competitions also,” said Eisenhower, who has filled prescriptions at the pharmacy for 16 years. “You just kind of have to get your own niche.”

Saline Mayor Gretchen Driskell conceded that the City Council’s expression of concern is largely “symbolic” because “the city has no jurisdictional rights to change (Pittsfield Township’s) zoning.”

She said more effective ways to deal with Wal-Mart would be to improve Saline’s downtown with stronger businesses.

'They are ruining our livelihood.'

Rick Kuss, Saline City Council member, on Wal-Mart's plans for a Pittsfield Township store about a mile from the city