Grub for the workingman

Back in the days when Courthouse Square was the center of town, Prochnow's Dairy Lunch, at 104 East Huron, was strategically placed as a casual eatery for the many workingmen in the area. "Everyone in town ate there," according to Derwood Prochnow, second cousin of Theodore Prochnow, the owner of the restaurant from 1902 to 1929 and 1937 to 1940.

The county's Victorian courthouse (1887-1955) sat in the middle of the block surrounded by grass and trees, and it had identical entrances on all sides—Main, Ann, Fourth, and Huron. Anyone leaving from the Huron Street door could see Prochnow's Dairy Lunch right across the street. An interurban stop, a row of busy stores sandwiched between the Allenel Hotel and the Farmers and Mechanics Bank, the courts and other government services all drew people to that block. Morrie Dalitz, driver for and later owner of the Varsity Laundry (on Liberty where the Federal Building now stands), remembers Huron Street between Fourth and Main as "busy and vibrant."

Prochnow's Dairy Lunch was tucked in behind the Farmers and Mechanics Bank in a building so narrow that there was no room for tables, just a horseshoe-shaped counter. However, the restaurant boasted many accoutrements that today are de rigueur for fancy yuppie restaurants: pressed-tin ceiling, ornate cash register, marble counters, wainscoting on the lower wall, and fancy mirrored coat racks.

Theodore Prochnow is remembered by his cousin as "not tall, about five-nine or five-ten. He walked with a limp because he was crippled in one leg, but he was a strong man. He ran the Dairy Lunch for years as the number-one operator." The kitchen was in the back. Dalitz remembers the sight of Prochnow cooking away, a cigar hanging out of his mouth. 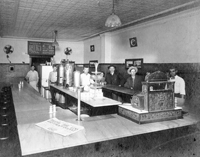 For almost four decades, Theodore Prochnow's lunch counter was part of a "busy and vibrant" block opposite the old courthouse. This photo was taken near the end of World War I; Prochnow is probably the man third from left.

Prochnow opened the restaurant in 1902, when he was only twenty-seven years old. He began in partnership with Otto Schaible, but by 1909 he was the sole owner. He operated the restaurant until 1929 when, tired of the daily grind, he sold it and started the Prochnow Food Specialty Company. But in 1937 he was back at the restaurant. The interim owners, first Fred Slade, then Raymond Smith and Thomas Fohey, weren't able to make a go of it during the Depression.

Prochnow served full meals, mainly breakfasts and lunches, but nothing fancy. There was no liquor, and it was not the sort of restaurant people went to evenings or on dates. In fact, it was "men only," according to Bertha Welker, who remembers the restaurant well because her older sister dated an employee, Ben Oliver. "It was a men's luncheon place," Welker explains. "Women didn't go out much in those days."

Derwood Prochnow describes the fare as "food the workingman wanted, food that filled his ribs"—meat, potatoes, gravy, and vegetables. He reports that Prochnow "didn't monkey with salad." Dessert was homemade pies. Overall, he rates the food as "good grub."

Dalitz gives a dissenting opinion: he remembers once finding a cigar butt in his oatmeal. Feeling sick, but not wanting to offend Prochnow (who was a good Varsity Laundry customer), Dalitz just stepped out for some air until he felt better. "I couldn't eat oatmeal for a long time after that," he recalls.

Dalitz remembers that pancakes, both regular and buckwheat, were Prochnow specialties. He also remembers revolving specials according to the day of the week—for instance, "terrible liver on Thursday." According to Dalitz, the draw of the restaurant was the low prices.

Of course, a mainstay of this kind of casual restaurant was coffee. Derwood Prochnow says that the Dairy Lunch was famous for having "the best coffee east of the Mississippi." His cousin bought it in barrels from a supplier in the East and put his own label on it. One of the main offerings of Prochnow's specialty food business was the coffee.

The Dairy Lunch customers were mainly people working or doing business in the area—at the courthouse, the Farmers' Market (then located on the Fourth Avenue side of the courthouse), or the many businesses on Prochnow's side of the block. These included two telegraph offices, two cigar stores (one reputed to run a betting operation on the side); a photography studio, real estate offices, a barber, a tailor, and a cab company.

Dalitz remembers other customers: farmers coming to town for the day, truck drivers, milk wagon operators, construction workers, and policemen who worked nearby in the old city hall at Huron and Fifth (kitty-corner from the present one). While there were other food places on the block, they were not in direct competition. Court Cafe served more snack-type food, like sandwiches and hamburgers, while Candyland's specialties were sweets and ice cream treats like banana splits and tin roofs.

Prochnow finally left the business for good in 1940. He died four years later. During the years he was feeding Ann Arbor, other Prochnows were also making their marks. His cousin David, father of Derwood, owned the Prochnow Grocery Store at 208 South Ashley, next to Hertler's. Another relative, Walter Prochnow, started Ann Arbor Buick in 1923.