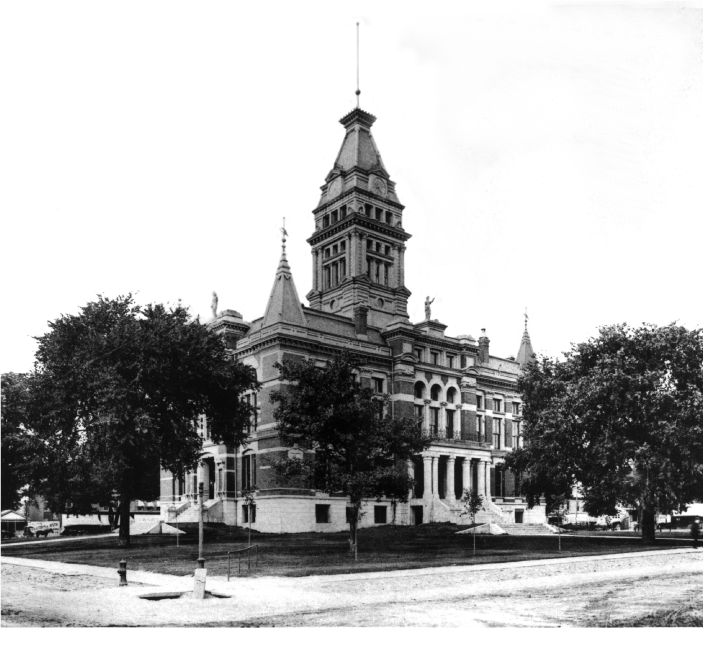 As laid out by village founders John Allen and Elisha Rumsey in 1824, the county courthouse block was to be a spacious town square surrounded by commercial blocks. Until the 1950s, Courthouse Square hummed with the activities that made Ann Arbor the focus of civic and business life in the county. The broad green open space was the choice site for parades, public speeches, political rallies, band concerts, and community events. Many of the area's most prominent hotels, live entertainment venues, banks, eating places, saloons, and other small retail and service businesses ringed the Square. Postal, telegraph, and newspaper offices were centered here and provided communication with the outside world. With its seven-story clock tower and park-like setting, the second courthouse was downtown's major architectural landmark from 1878 to the 1950s. The seat of Washtenaw County government and courts, it was a grand presence. It proclaimed the vitality and importance of Ann Arbor in the commercial, civic, and cultural life of the region. Building decay, combined with a vigorous campaign for more space and a modern image, led the County to replace it with the courthouse you now see on the site. Then-mayor William Brown stated the assumptions of the era perfectly: "The present courthouse was built before the turn of the century. Need I say more?"

Frame location: On Main and Huron, SW Corner of Keybank