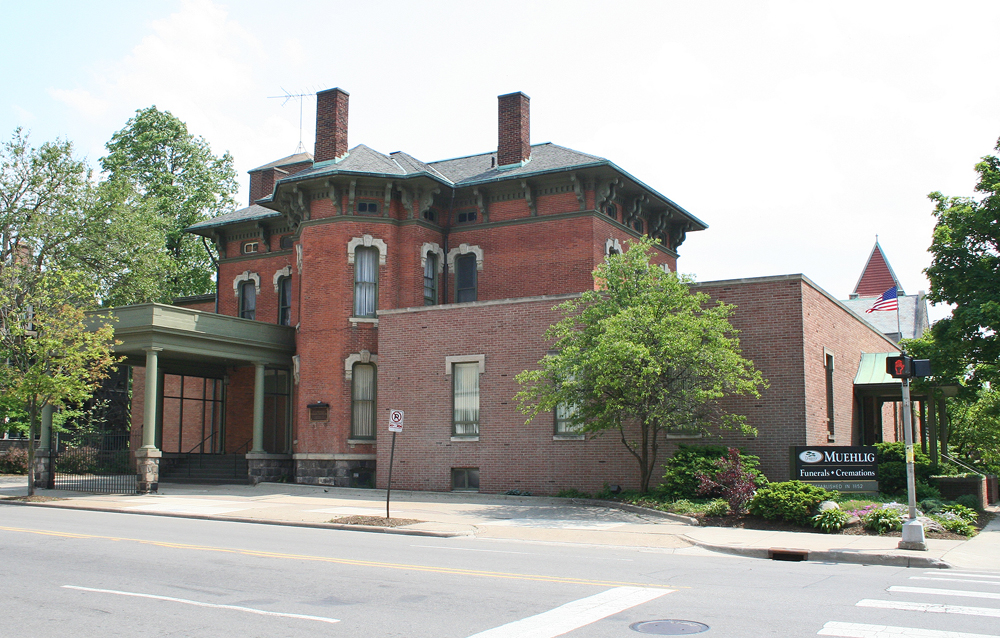 This brick house was originally constructed by local builder John Gates as a private residence for Joe T. Jacobs, a clothier. The house features pairs of curved brackets supporting the roof, tall windows capped by stone keystones, and small attic windows?????all hallmarks of the late Italianate style. Although partially obscured by the funeral parlor's additions, these original features are still quite visible. It was one of four high-style buildings which graced this intersection. Today, only this house and the Eberbach house across the street, remind us of this era of gentility.

Jacobs came to Ann Arbor from Ohio and started his clothing business in 1867. In 1880 he was nominated by the Republicans for State Senator from Washtenaw County. He was also a major benefactor of the Toledo, Ann Arbor and Northern Michigan Railway and helped it to succeed.

Jacobs sold his house to Dr. J. B. Lynds, who used it as a private hospital until he died in the 1918 influenza epidemic. In 1928 Muehlig's Funeral Chapel purchased the property and added the porte-cochere (covered driveway) and a large garage accessible from two directions. More remodeling occurred in 1951 and again in 1964 when the front portion was added and the parking lot expanded.

Muehlig Funeral Chapel itself has a long history. Florian Muehlig began a coffin and cabinetry business in 1852 in the upper floors of the 200 block of South Main Street. Today it is the oldest funeral parlor in the state and the oldest continuously operating business in Ann Arbor.