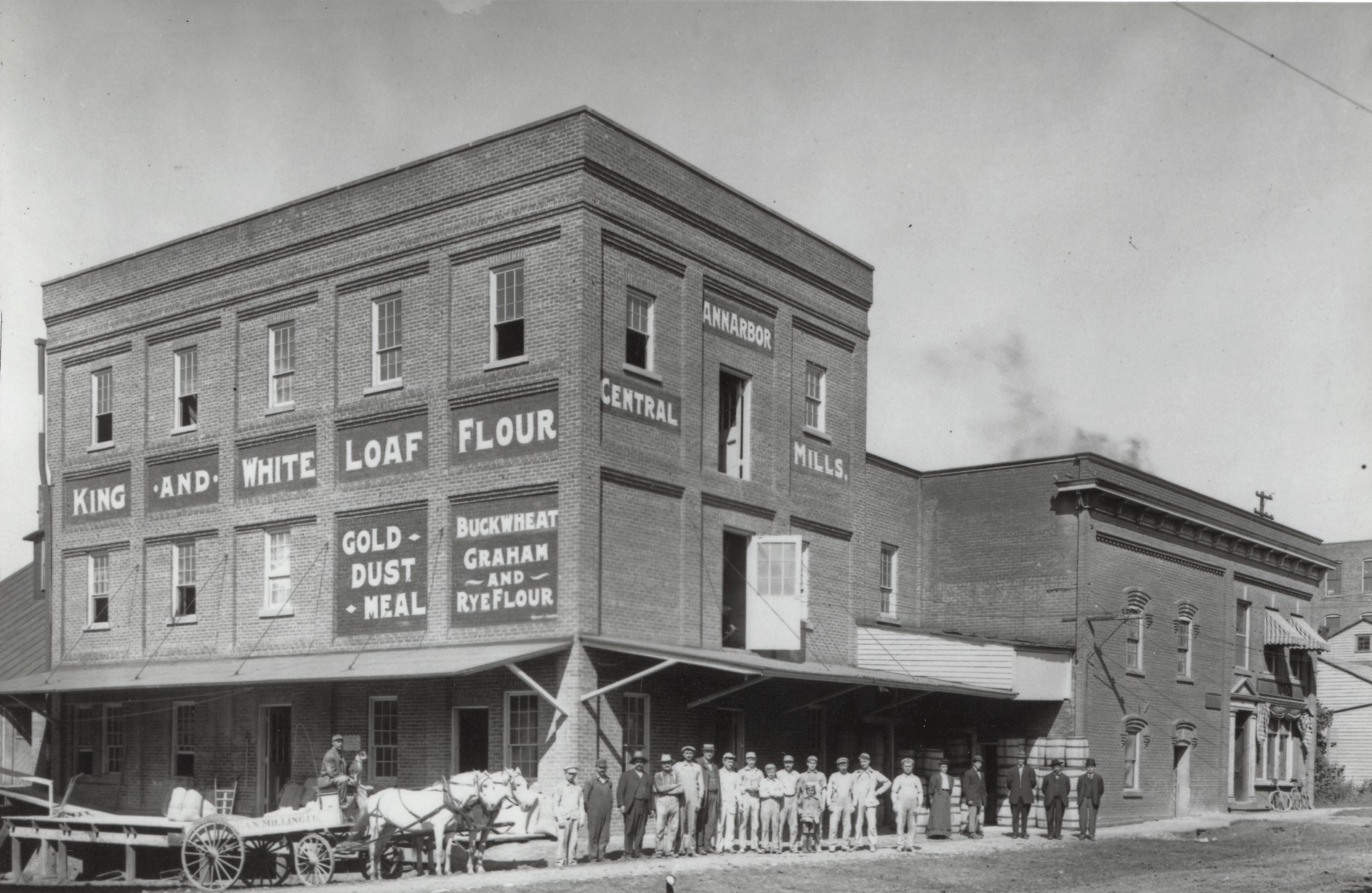 Due to its proximity to Allen Creek and to the main roads leading out of central Ann Arbor, this was an ideal location for a brewery. The 1853 map of Ann Arbor indicates "brewery" on this site. By 1860 the first City Directory lists it as G.F. Hauser's City Brewery; in 1868 it is John Reyer's City Brewery and in 1872 the Ekhardt Bros. Brewery. This German proprietorship has left its mark to this day: arched brick vaults in the basement are where beer "lagered" (lay) in barrels to age to the German taste for lighter beer.

The Panic of 1873 bankrupted many breweries, including this one. The Ann Arbor Central Mills acquired the property in 1882 and became the nucleus for a major flour mill operation lasting well into the 20th century. In the 1880s Washtenaw County was a highly profitable wheat growing area due to the increased use of the thresher. The beer industry still involved part of the property, however, as shown by an advertisement in the University of Michigan Yearbook, The Palladium, for 1886: "- W. Fred Schlanderer, Ann Arbor City Bottling Works, west side First, between Liberty and Washington, Schlitz Export, Pilsener, and Detroit Peninsular Brewery Co.'s Beer, delivered to any part of the city, daytime or evening."

The first building housing the mill was clapboard. The brick building here today was probably built around 1900. Since its windows are identical to those visible in photographs of the earlier wooden mill, it is likely that they were reused in the new brick building. This gives the building an older feeling, as does the faded sign on the south wall advertising "KING AND WHITE LOAF FLOUR".

Other sections to the north of the mill include a two-story brick structure (probably from the 1860s) which originally had a pitched roof and rounded windows with thick brick arches. The northernmost part, built in 1905 for the mill offices, now houses the Blind Pig Saloon. It still contains the Central Mills' original walk-in safe, now used as a wine cooler by the restaurant.

In 1921, Ernest ("Ernie") F. Lohr bought the mill buildings and used them as a feed store until 1939 when he moved his own farm implement store into the structures. Today Ann Arbor Implement is still operating under the guidance of his son and son-in-law. Lawn and garden equipment have replaced farm machinery but the friendly atmosphere harks back to an earlier era, including the willingness of the owners to give tours of the lagering vaults when not too busy. In 1976 the Ann Arbor Bicentennial Commission awarded Lohr and the new owners of the Blind Pig a certificate for their preservation efforts.