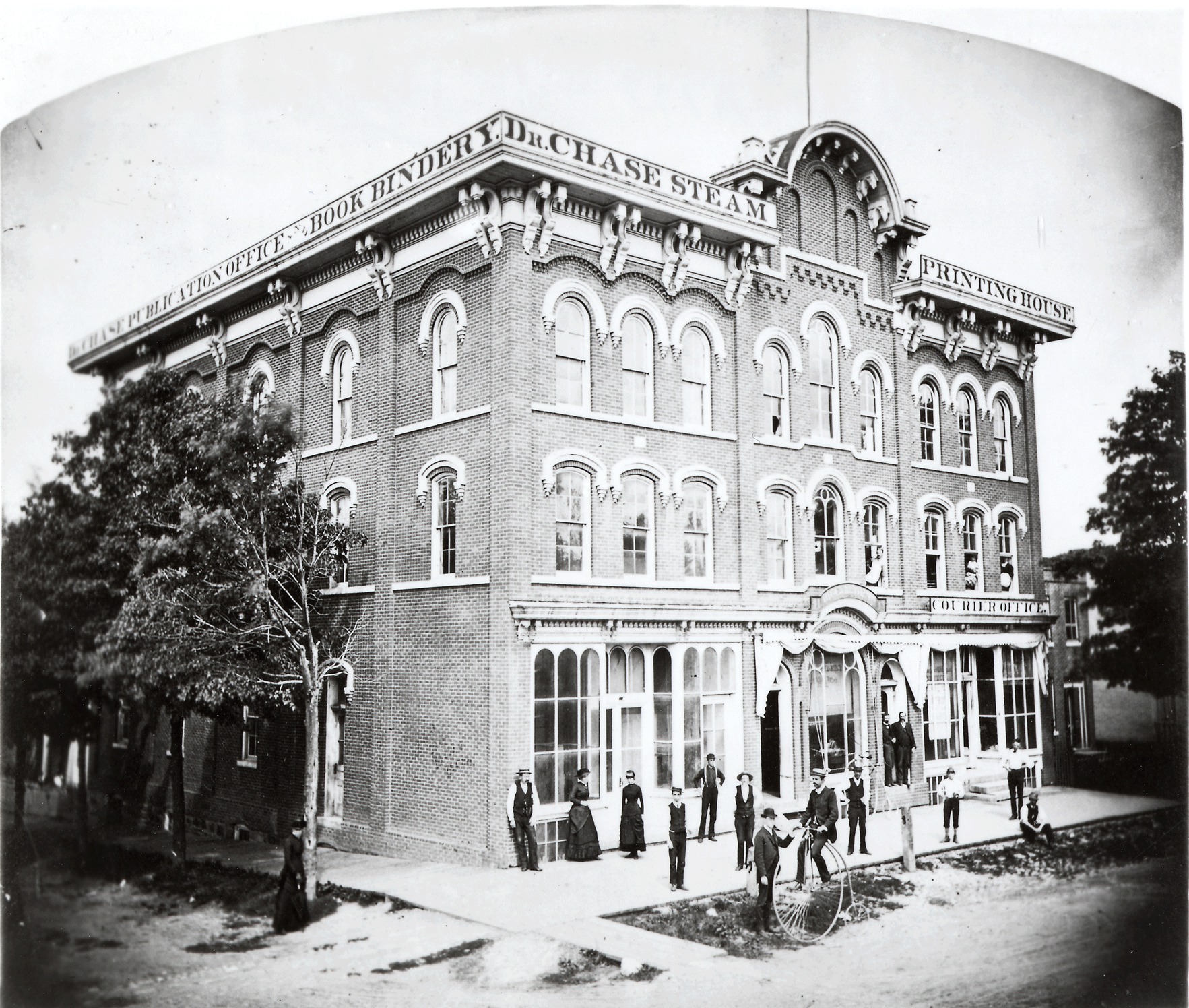 This commercial brick building in the popular Italianate style originally housed the printing plant of Dr. Alvin Wood Chase. It was built in two stages by W. H. Mallory during and after the Civil War. Dr. Chase published the local Republican newspaper, the Peninsular Courier and Family Visitant later shortened to the Ann Arbor Courier after which the building became known as the Courier Block.

Dr. Chase is much more famous for another publication, his book entitled Dr. Chase's Recipes, or Information for Everybody. Jan Longone, a nationally known culinary historian based in Ann Arbor, writes that "from a humble first edition of one thousand pamphlets there grew a major publishing industry which issued uncounted numbers of Dr. Chase's work, perhaps Michigan's single greatest contribution to American cookbook history." Although originally only sixteen pages, by 1865 the pamphlet was in its 26th edition. Its gilt-embossed, leather-bound edition of 384 pages was outsold in America only by the Bible. It listed medical remedies and cooking recipes as well as numerous other household hints. It even explained how to keep bees and detect counterfeit money. An indispensable tool for westward bound pioneers, it was translated into several languages. It soon made Dr. Chase a very wealthy man.

In 1869 Chase retired and sold his building and the rights to his publications to Rice A. Beal. This was a decision he later regretted when he saw how rich Beal became reprinting Dr. Chase's Recipes. Beal died in 1883 and his son Junius, later a Regent of the University of Michigan, continued to publish both the Courier and the Recipes until 1906.

In the 20th century the building was used for a succession of businesses including a rug factory, wholesale grocery, and Montgomery Ward warehouse. Eventually abandoned, it was purchased and renovated in 1968 by the planning firm of Johnson, Johnson and Roy. The firm had been founded in 1957 by brothers Carl and William Johnson, landscape architects. In the early 1960s they were hired to create a master plan for the University of Michigan campus and by the late 1960s they had developed a reputation as a progressive and innovative firm. An example of this was their renovation of this building for their offices, the first investment in a historic building in downtown Ann Arbor. In 1976 Johnson, Johnson and Roy received a Bicentennial Award for "their special contribution to the quality of life in Ann Arbor through the renovation of 301-305 N. Main."

During the 20th century the building lost a good deal of its most distinctive ornamental detailing including the projecting wood cornice with carved eave brackets and an arched centerpiece. Corbelled arcading, typical round and segmental window hoods, and the dentate brickwork within the central portion survive.

Although no longer a pristine example of the architectural style, the Courier Block dominates an important corner in the original central business district and marks the location of important events in publishing history. A marked increase in the restoration of other downtown buildings in the 1970s and 80s has proven that Johnson, Johnson and Roy's vision of the value of older downtown buildings was not misplaced. They started a trend which continues to this day.