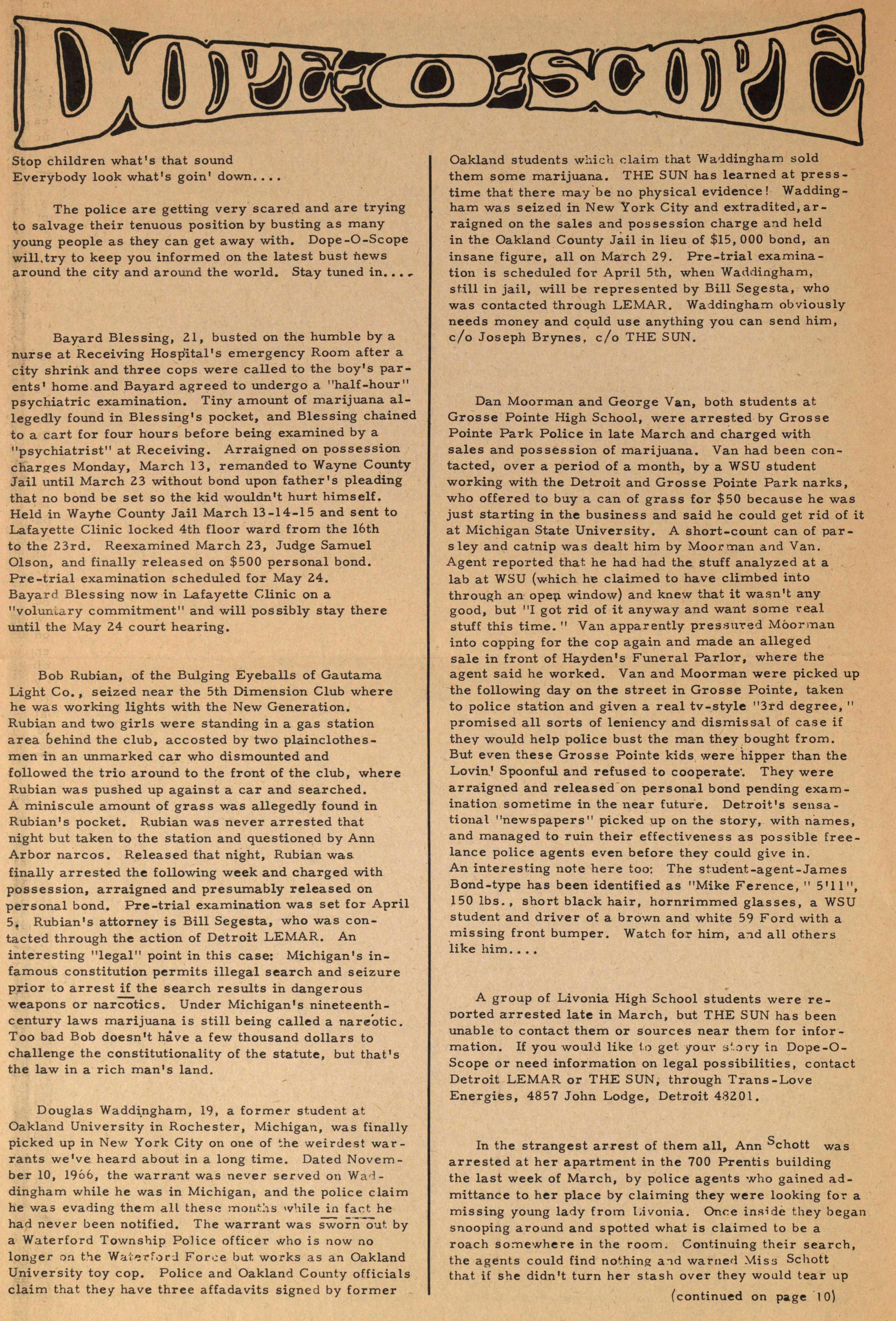 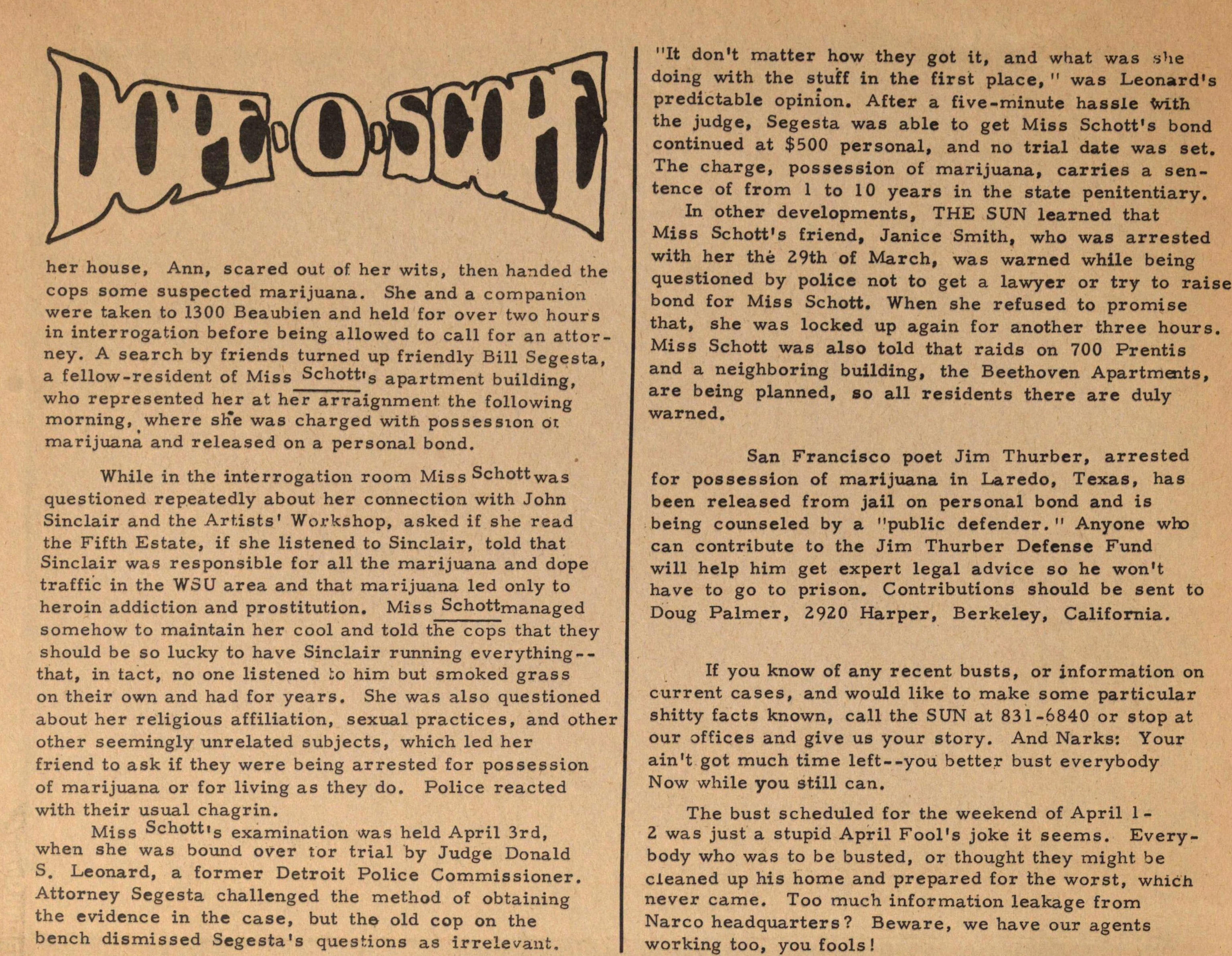 Stop children what's that sound Everybody look what's goin' down. . . .

The police are getting very scared and are trying to salvage their tenuous position by busting as many young people as they can get away with. Dope -O -Scope will try to keep you informed on the latest bust news around the city and around the world. Stay tuned in. . . .

Bayard Blessing, 21, busted on the humble by a nurse at Receiving Hosital's emergency Room after a city shrink and three cops were called to the boy's parents' home and Bayard agreed to undergo a "half-hour" psychiatric examination. Tiny amount of marijuana allegedly found in Blessing's pocket, and Blessing chained to a cart for four hours before being examined by a "psychiatrist" at Receiving. Arraigned on possession charges Monday, March 13, remanded to Wayne County Jail until March 23 without bond upon father's pleading that no bond be set so the kid wouldn't hurt himself . Held in Wayne County Jail March 13-14-15 and sent to Lafayette Clinic locked 4th floor ward from the I6th to the 23rd. Reexamined March 23, Judge Samuel Olson, and finally released on $500 personal bond. Pre-trial examination scheduled for May 24. Bayard Blessing now in Lafayette Clinic on a "voluntary commitment" and will possibly stay there until the May 24 court hearing.

Bob Rubian, of the Bulging Eyeballs of Gautama Light Co. , seized near the 5th Dimension Club where he was working lights with the New Generation. Rubian and two girls were standing in a gas station area behind the club, accosted by two plainclothesmen in an unmarked car who dismounted and followed the trio around to the front of the club, where Rubian was pushed up against a car and searched. A miniscule amount of grass was allegedly found in Rubian's pocket. Rubian was never arrested that night but taken to the station and questioned by Ann Arbor narcos. Released that night, Rubian was finally arrested the following week and charged with possession, arraigned and presumably released on personal bond. Pre-trial examination was set for April 5. Rubian's attorney is Bill Segesta, who was contacted through the action of Detroit LEMAR. An interesting "legal" point in this case: Michigan's infamous constitution permits illegal search and seizure prior to arrest if the search results in dangerous weapons or narcotics. Under Michigan's nineteenth century laws marijuana is still being called a narcotic. Too bad Bob doesn't have a few thousand dollars to challenge the constitutionality of the statute, but that's the law in a rich man's land.

Douglas Waddingham, 19, a former student at Oakland University in Rochester, Michigan, was finally picked up in New York City on one of the weirdest warrants we've heard about in a long time. Dated November 10, 1966, the warrant was never served on Waddingham while he was in Michigan, and the police claim he was evading them all these months while in fact he had never been notified. The warrant was sworn out by a Waterford Township Police officer who is now no longer on the Waterford Force but works as an Oakland University toy cop. Police and Oakland County officials claim that the have three affadavits signed by former Oakland students which claim that Waddingham sold them some marijuana. THE SUN has learned at presstime that there may be no physical evidence! Waddingham was seized in New York City and extradited, arraigned on the sales and possession charge and held in the Oakland County Jail in lieu of $15,000 bond, an insane figure, all on March 29. Pre-trial examination is scheduled for April 5th, when Waddingham, still in jail, will be represented by Bill Segesta, who was contacted through LEMAR. Waddingham obviously needs money and could use anything you can send him, c/o Joseph Brynes, c/o THE SUN.

Dan Moorman and George Van, both students at Grosse Pointe High School, were arrested by Grosse Pointe Park Police in late March and charged with sales and possession of marijuana. Van had been contacted, over a period of a month, by a WSU student working with the Detroit and Grosse Pointe Park narks, who offered to buy a can of grass for $50 because he was just starting in the business and said he could get rid of it at Michigan State University. A short-count can of parsley and catnip was dealt him by Moorman and Van. Agent reported that he had had the stuff analyzed at a lab at WSU (which he claimed to have climbed into through an open window) and knew that it wasn't any good, but "I got rid of it anyway and want some real stuff this time." Van apparently pressured Moorman into copping for the cop again and made an alleged sale in front of Hayden's Funeral Parlor, where the agent said he worked. Van and Moorman were picked up the following day on the street in Grosse Pointe, taken to police station and given a real tv-style "3rd degree," promised all sorts of leniency and dismissal of case if they would help police bust the man they bought from. But even these Grosse Pointe kids were hipper than the Lovin' Spoonful and refused to cooperate. They were arraigned and released on personal bond pending examination sometime in the near future. Detroit's sensational "newspapers" picked up on the story, with names, and managed to ruin their effectiveness as possible freelance police agents even before they could give in. An interesting note here too: The student-agent-James Bond-type has been identified as "Mike Ference, " 5'11", 150 lbs. , short black hair, hornrimmed glasses, a WSU student and driver of a brown and white 59 Ford with a missing front bumper. Watch for him, and all others like him. . . .

A group of Livonia High School students were reported arrested late in March, but THE SUN has been unable to contact them or sources near them for information. If you would like to get your story in Dope-O-Scope or need information on legal possibilities, contact Detroit LEMAR or THE SUN, through Trans -Love Energies, 4857 John Lodge, Detroit 48201.

In the strangest arrest of them all, Ann Schott was arrested at her apartment in the 700 Prentis building the last week of March, by police agents who gained admittance to her place by claiming they were looking for a missing young lady from Livonia. Once inside they began snooping around and spotted what is claimed to be a roach somewhere in the room. Continuing their search, the agents could find nothing and warned Miss Schott that if she didn't turn her stash over they would tear up

her house, Ann, scared out of her wits, then handed the cops some suspected marijuana. She and a companion were taken to 1300 Beaubien and held for over two hours in interrogation before being allowed to call for an attorney. A search by friends turned up friendly Bill Segesta, a fellow-resident of Miss Schott's apartment building, who represented her at her arraignment the following morning, where she was charged with possession of marijuana and released on a personal bond.

While in the interrogation room Miss Schott was questioned repeatedly about her connection with John Sinclair and the Artists' Workshop, asked if she read the Fifth Estate, if she listened to Sinclair, told that Sinclair was responsible for all the marijuana and dope traffic in the WSU area and that marijuana led only to heroin addiction and prostitution. Miss Schott managed somehow to maintain her cool and told the cops that they should be so lucky to have Sinclair running everything- that, in fact, no one listened to him but smoked grass on their own and had for years. She was also questioned about her religious affiliation, sexual practices, and other other seemingly unrelated subjects, which led her friend to ask if they were being arrested for possession of marijuana or for living as they do. Police reacted with their usual chagrin.

Miss Schott's examination was held April 3rd, when she was bound over tor trial by Judge Donald S. Leonard, a former Detroit Police Commissioner. Attorney Segesta challenged the method of obtaining the evidence in the case, but the old cop on the bench dismissed Segesta's questions as irrelevant. "It don't matter how they got it, and what was she doing with the stuff in the first place," was Leonard's predictable opinion. After a five-minute hassle with the judge, Segesta was able to get Miss Schott's bond continued at $500 personal, and no trial date was set. The charge, possession of marijuana, carries a sentence of from 1 to 10 years in the state penitentiary.

In other developments, THE SUN learned that Miss Schott's friend, Janice Smith, who was arrested with her the 29th of March, was warned while being questioned by police not to get a lawyer or try to raise bond for Miss Schott. When she refused to promise that, she was locked up again for another three hours. Miss Schott was also told that raids on 700 Prentis and a neighboring building, the Beethoven Apartments, are being planned, so all residents there are duly warned.

San Francisco poet Jim Thurber, arrested for possession of marijuana in Laredo, Texas, has been released from jail on personal bond and is being counseled by a "public defender." Anyone who can contribute to the Jim Thurber Defense Fund will help him get expert legal advice so he won't have to go to prison. Contributions should be sent to Doug Palmer, 2920 Harper, Berkeley, California.

If you know of any recent busts, or information on current cases, and would like to make some particular shitty facts known, call the SUN at 831-6840 or stop at our offices and give us your story. And Narks: Your ain't got much time left--you better bust everybody Now while you still can.

The bust scheduled for the weekend of April 1 - 2 was just a stupid April Fool's joke it seems. Everybody who was to be busted, or thought they might be cleaned up his home and prepared for the worst, which never came. Too much information leakage from Narco headquarters? Beware, we have our agents working too, you fools!