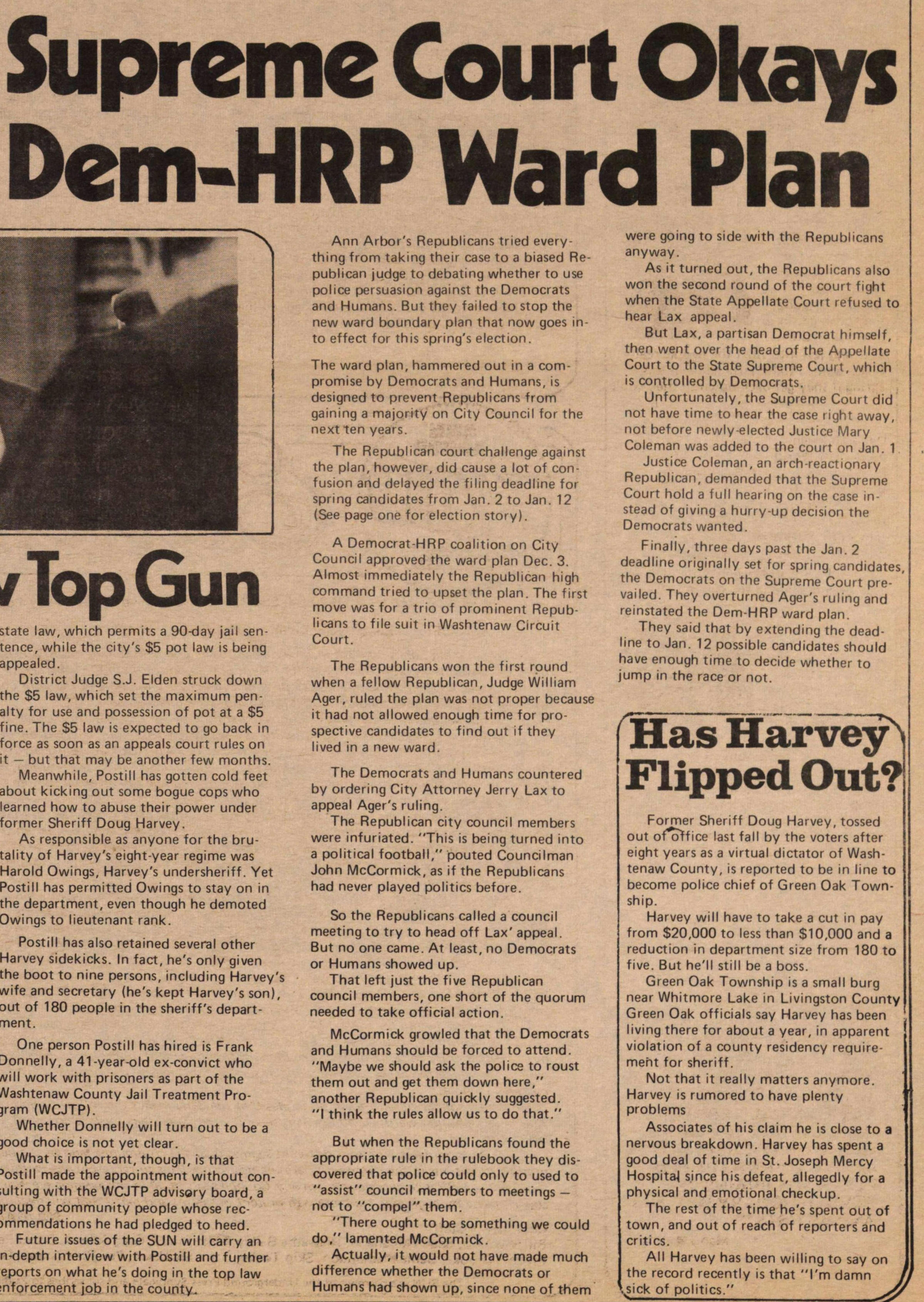 Ann Arbor's Republicans tried everything from taking their case to a biased Republican judge to debating whether to use police persuasion against the Democrats and Humans. But they failed to stop the new ward boundary plan that now goes into effect for this spring's election.

The ward plan, hammered out in a compromise by Democrats and Humans, is designed to prevent Republicans from gaining a majority on City Council for the next ten years.

The Republican court challenge against the plan, however, did cause a lot of confusion and delayed the filing deadline for spring candidates from Jan. 2 to Jan. 12 (See page one for election story).

A Democrat-HRP coalition on City Council approved the ward plan Dec. 3. Almost immediately the Republican high command tried to upset the plan. The first move was for a trio of prominent Republicans to file suit in Washtenaw Circuit Court.

The Republicans won the first round when a fellow Republican, Judge William Ager, ruled the plan was not proper because it had not allowed enough time for prospective candidates to find out if they lived in a new ward.

The Republican city council members were infuriated. "This is being turned into a political football," pouted Councilman John McCormick, as if the Republicans had never played politics before.

So the Republicans called a council meeting to try to head off Lax' appeal. But no one came. At least, no Democrats or Humans showed up.

That left just the five Republican council members, one short of the quorum needed to take official action.

McCormick growled that the Democrats and Humans should be forced to attend. "Maybe we should ask the police to roust them out and get them down here," another Republican quickly suggested. "I think the rules allow us to do that."

But when the Republicans found the appropriate rule in the rulebook they discovered that police could only to used to "assist" council members to meetings -- not to "compel" them.

"There ought to be something we could do," lamented McCormick.

Actually, it would not have made much difference whether the Democrats or Humans had shown up, since none of them were going to side with the Republicans anyway.

As it turned out, the Republicans also won the second round of the court fight when the State Appellate Court refused to hear Lax appeal.

But Lax, a partisan Democrat himself, then went over the head of the Appellate Court to the State Supreme Court, which is controlled by Democrats.

Unfortunately, the Supreme Court did not have time to hear the case right away, not before newly-elected Justice Mary Coleman was added to the court on Jan. 1

Justice Coleman, an arch-reactionary Republican, demanded that the Supreme Court hold a full hearing on the case instead of giving a hurry-up decision the Democrats wanted.

Finally, three days past the Jan. 2 deadline originally set for spring candidates, the Democrats on the Supreme Court prevailed. They overturned Ager's ruling and reinstated the Dem-HRP ward plan.

They said that by extending the deadline to Jan. 12 possible candidates should have enough time to decide whether to jump in the race or not.