Friends Of Our Ford 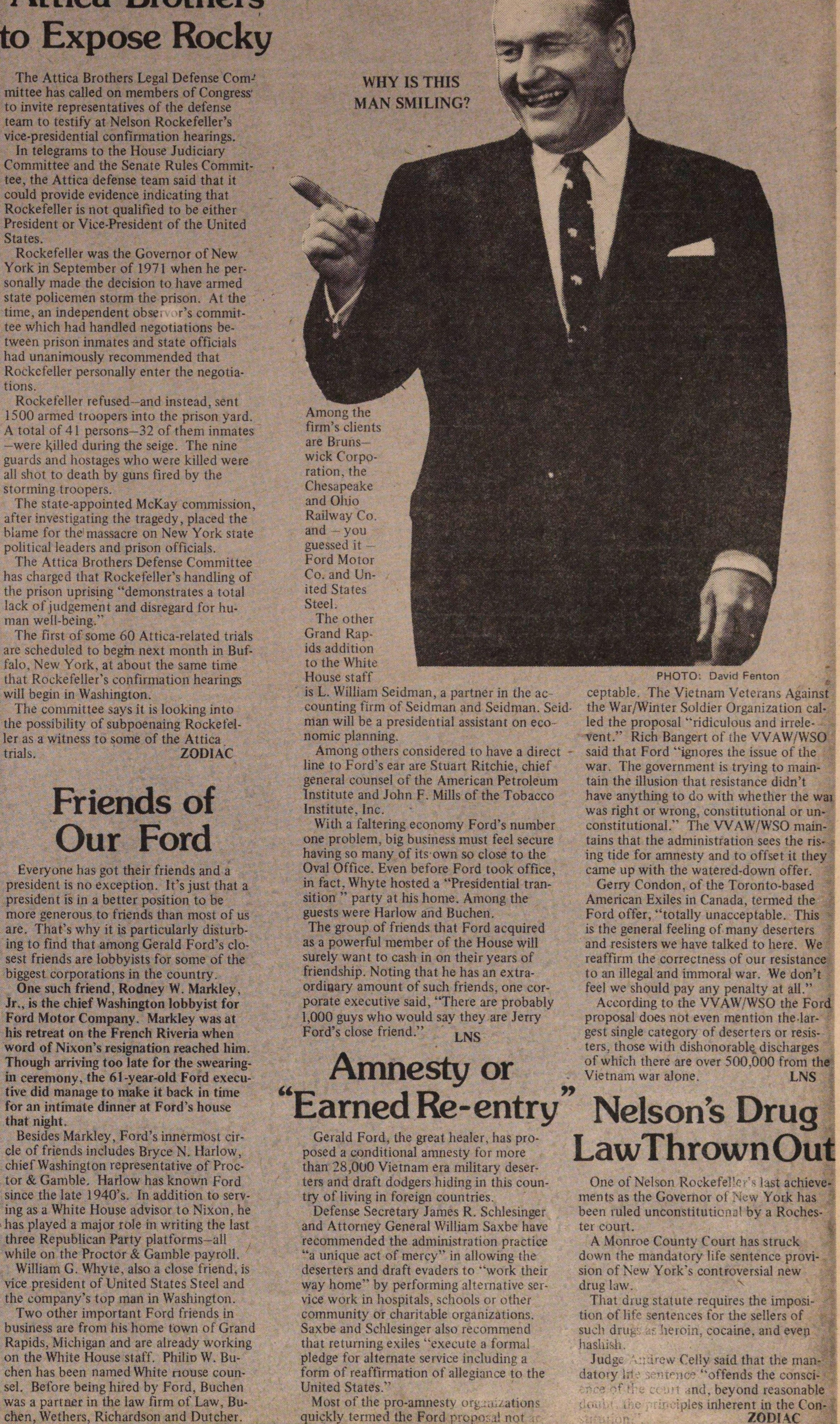 Everyone has got their friends and a president is no exception. It's just that a president is in a better position to be more generous to friends than most of us are. That's why it is particularly disturbing to find that among Gerald Ford's closest friends are lobbyists for some of the biggest corporations in the country. One such friend, Rodney W. Markley, Jr., is the chief Washington lobbyist for Ford Motor Company. Markley was at his retreat on the French Riveria when word of Nixon's resignation reached him. Though arriving too late for the swearingüi ceremony, the 61-year-old Ford executive did manage to make it back in time for an intímate dinner at Ford's house that night . Besides Markley, Ford's innermost circie of friends includes Bryce N. Harlow, cliief Washington representative of Proctor & Gamble. Harlow has known Ford since the late 1940's. In addition to serving as a White House advisor to Nixon, he has played a major role in writing the last three Republican Party platforms-all while on the Proctor & Gamble payroll. William G. Wliyte, also a close friend, is vice president of United States Steel and the company's top man in Washington. Two other important Ford friends in business are from his home töwn of Grand Rapids, Michigan and are already working on the White House staff. PhiÜD W. Buchen has been named White nouse counsel. Before being hired by Ford, Buchen was a partaer in the law firm of Law, Buchen, Wethers, Richardson and Dutcher. Among the firm's clients are Brunswick Corporation, the Chesapeake and Ohio Railway Co. and you guessed it Ford Motor Co. and United States Steel. The other Grand Rapids addition to the White House staff is L. william Seidman, a partner in the accounting firm of Seidman and Seidman. Seidman will be a presídential assistant on economie planning. Among others considered to have a direct - line to Ford's ear are Stuart Ritchie, chief general counsel of the American Petroleum Institute and John F. Mills of the Tobacco Institute, inc. With a faltering economy Ford's number one probiem, big business must feel secure having so many of its own so close to the Oval Office. Even before Ford took office, in fact. Whyte hosted a "Presidential transition " party at his home. Among the guests were Harlow and Buchen. The group of friends that Ford acquired as a powerful member of the House will surely want to cash in on their years of friendship. Noting that he has an extraordiaary amount of such friends, one corporate executive said, "There are probably 1.000 euvs who would sav thev are Jerrv Ford's close friend." WHY IS THIS MAN SMILING?